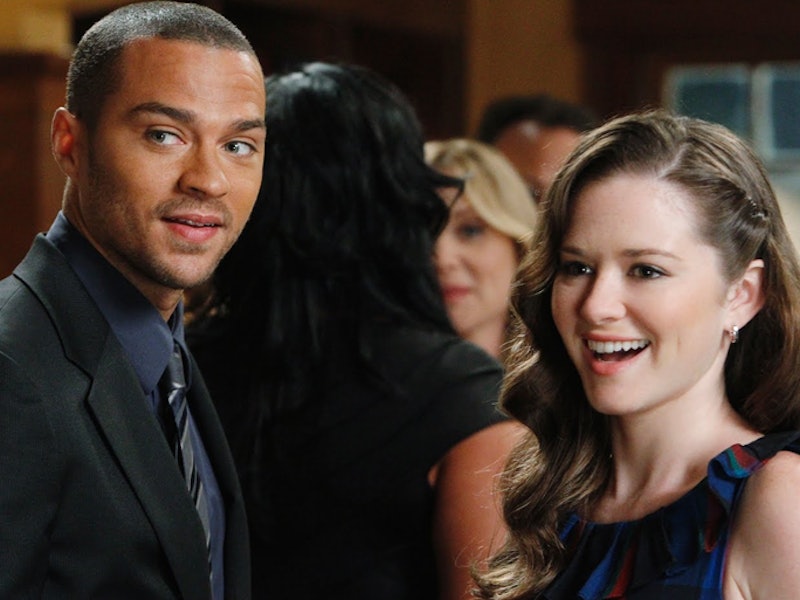 There have only been two episodes in Grey's Anatomy Season 12, but so far, it's really bumming me out. The only thing as heartbreaking as remembering Derek Shepherd is no longer with us is the fact that April and Jackson's relationship — which was previously the cutest thing ever — is as good as over. After the drama last season with Jackson issuing April an ultimatum (she had to stay put in Seattle or lose him forever), she's finally back... and not doing so hot. Not only is she afflicted with a serious infection, but Jackson is totally giving April the cold shoulder on top of it.

When April showed up at Grey-Sloan for work, she was covered in a mysterious rash and promptly locked into an isolation room until they could figure out what her deal is. Jackson visited her every so often, but only to give her updates on her labs and was not interested in talking things out whatsoever. I can't blame him, because he's been hurt, but seriously, dude, this is your wife. Can we not talk things out? Can we get back to the good old days when instead of arguing, you guys looked like this?

Eventually, though, April figures out a trick: Page him 911 and force him to talk things out. Because, as April says, they did make a promise to love each other forever. Homegirl's not wrong, even if she has made a mess of things since she and Jackson lost Samuel. Obviously, losing a child alters a relationship and a marriage in a huge way, but it's hard to imagine that these two can't eventually work things out. Marriage counseling, maybe? Plenty of serious discussions? Anything?

I've been pretty optimistic about their fate as a couple until now, but after that screaming match in the hospital, I'm not so sure. Now that Jackson has said he's not sure their relationship is worth fighting for, it might be the final nail in the Japril coffin, as sad as that is to think about. And even though Jackson is dead set against it, April refuses to quit fighting.

April, I hope you win. My sad, broken little heart beaten down by too many Shondaland plot twists is depending on it.