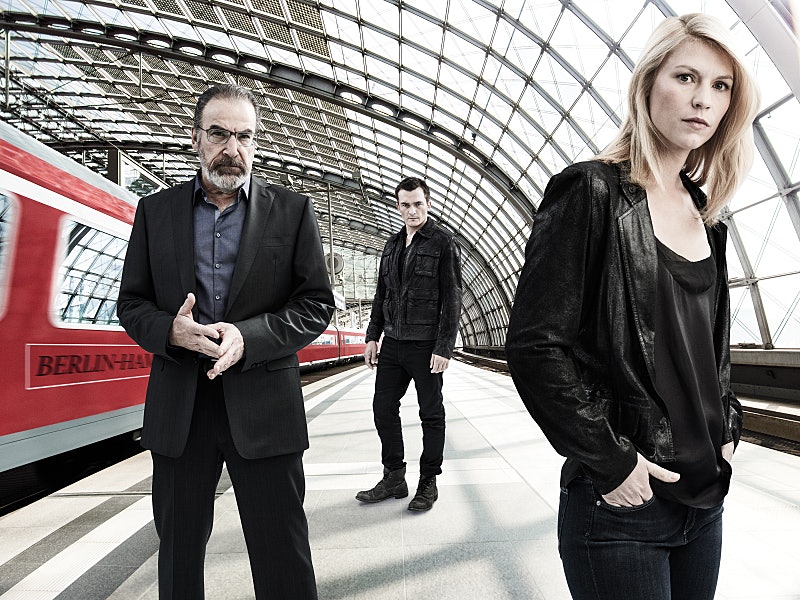 Carrie, Saul, and Peter have returned like the prodigal sons and daughters all Homeland fans have been itching to see for much too long. Homeland Season 5 premieres on Sunday night, but before we are thrust back into the world of Carrie Mathison, her new life, and the lives of those we miss from the CIA, there is much to recap from Homeland Season 4 for those who may have forgotten where we left off. It was quite the reboot for the series. Brody was dead and buried, Carrie was starting her new life, and she was now working out of Kabul for the CIA. After a drone strike which supposedly killed the terrorist Haqqani, Carrie is ordered in front of the CIA Director Lockhart thanks to the uproar from a video uploaded featuring the strike, and former section chief Sandy Bachman is killed in a mob retaliation of the video. Carrie blackmails her way to the station chief position in Pakistan, after telling Lockhart she knew Sandy was trading state secrets and that Lockhart knew it, too. And that's just the beginning.

Carrie has been through way more than most people, and it seems Season 5 will be no different as Carrie is now out from under the CIA's grip and is working in Berlin doing private security. But before we can see how she will be thrown back into her old life, we have to understand why she left in the first place. So let's break down the actions of Season 4.

After Carrie returns to Pakistan as the new section chief, she begins a new secret base and convinces Quinn to join her. Then she tasks her operative Fara to find the one survivor of the attack on Haqqani, Aayan, and recruit him. Unfortunately, Fara fails when Aayan gets scared, so Carrie swoops in to do the job by seducing him (he's still in college by the way) and offers to smuggle him into London. It's totally creepy, but it has to be done in Carrie's mind. Fara discovers that Aayan is actually Haqqani's nephew, and he reveals to Carrie that Haqqani is still alive. When Carrie and her team set up an attack, Aayan runs away and meets up with Haqqani, who is then tracked by a drone set up to follow Aayan. In retaliation, Haqqani's men kidnap Saul in exchange for five prisoners. The trade is made after Carrie is persuaded by Quinn not to order a drone strike on Haqqani anyway (as Saul wanted her to do).

After Saul is saved, however, Haqqani's men attack Carrie and Saul's vehicles with intense blasts. As that is happening, Haqqani's men also infiltrate the Embassy thanks to prior intelligence from Ambassador Martha Boyd's husband Dennis working as a traitor for the other side. Haqqani and his men receive a list of informants from Lockhart in order to stop the attack, but after killing Fara, they are pursued by Quinn and thus escape the Embassy. Carrie later sees Dar Adal in a car with Haqqani, and realizes that U.S. has made a deal with Haqqani and taken him off the kill list. When Carrie heads home, she buries her recently deceased father and sees her mother for the first time in 15 years. She attempts to find out why her mother left their family. After learning it was due to her becoming pregnant from an affair and not her father's bipolar disorder, Carrie leaves slightly more at peace than before.

But things don't end on the best note, as Carrie discovers that Saul was a supporter of taking Haqqani off the kill list. She leaves Dar Adal's house where she finds Saul in anger and walks away from the agency by the season's end.

Saul may seem like a more morally grey character at the end of Homeland Season 4, but his actions happen thanks to circumstances out of his control. Saul is in the States for a few episodes, but then makes his way to the US Embassy in Pakistan for private security purposes. He is aware of Carrie's actions, but is taken prisoner by Haqqani's men after Haqqani is attacked thanks to his own nephew Aayan. Haqqani later kills Aayan after blaming him for the drone tailing him, and Saul is offered as an exchange for five prisoners in U.S. custody. At first Carrie is unwilling to make the trade (though it is not an easy decision and one only made because Saul asked for it), but Quinn convinces her to do it. Saul, on the other hand, is not convinced. He does not want to be traded in this way and is staunchly against the idea, even after the trade has been made and he is walking back with Carrie.

From here, Saul then becomes a supporter of taking Haqqani's name off the kill list, after Dar Adal shows him that he obtained the video of Saul while captured by Haqqani. This video, if released, would ruin Saul's career, especially if he wants to come back to the CIA, possibly even as the new director. Saul agrees to Dar Adal's actions even though he is offended by them and Dar invites him back to the agency, but Saul can't explain any of this to Carrie. He and Carrie part on very bad terms.

Quinn's journey is a rough one. He starts out the season working in Pakistan and tries to stop the murder of Sandy Bachman after the video of the drone strike on Haqqani is leaked. Quinn and Carrie barely make it out alive of the mob, and Quinn returns to Washington. While Carrie finds a way back to Pakistan as the new station chief, Quinn struggles to deal with what happened. He begins drinking heavily, but does give Carrie the tip that allows her to blackmail her way to her new position. Quinn tries to quit the CIA, but the interview to release doesn't go well. After realizing that Sandy's death was orchestrated, he calls Carrie and lets her know. She then convinces him to come back to Pakistan to help her, and he of course agrees to go.

When Saul escapes his kidnappers, Quinn is the one who helps him try and get to a CIA safehouse. Unfortunately, Saul is captured once again and Quinn convinces Carrie to make the exchange: Saul for five prisoners to Haqqani.

Quinn is at the U.S. Embassy in Pakistan when it is attacked by Haqqani and his men. Instead of getting captured, Quinn escapes and attempts to save the hostages alongside a Marine. After Haqqani kills Fara despite getting the list of informants he wanted, Quinn opens fire at the terrorists, but a wounded Haqqani escapes. Quinn attempts to find Haqqani and kill him, but seeing Carrie in the line of fire, he stands down. Carrie goes to kill Haqqani herself, only to be stopped by Aasar Khan who shows her Dar Adal sitting in the car with him.

Quinn also shares some romance with Carrie towards the end of the season. After they both return home from Pakistan, Quinn visits Carrie after her father's funeral. The two share a kiss and Quinn tells Carrie he wants to leave the CIA with her help and start over. Carrie tells him that a relationship with her is a bad idea, but he doesn't listen. He asks her to think about it, but when he gets a phone call from her and hears her hesitation, he assumes Carrie will say no to him. He decides to take another mission that is offered to him in Syria. And that's the last we see of him, despite Carrie trying to get in touch with him after it's too late.

So what will come of our favorite characters in Season 5? Only time (and a time-jump) can tell us what we want to know. Thank goodness Homeland is finally back.

More like this
'Stranger Things' Season 5 Will Echo Season 1 In A Key Way, The Duffer Brothers Confirm
By Kadin Burnett and Sophie McEvoy
‘Squid Game’ Creator Hwang Dong-Hyuk Just Dropped A Major Season 2 Tease
By Brian Anthony Hernandez and Bustle Editors
Everything To Know About 'Westworld' Season 5
By Sophia Moore
Courteney Cox Doesn't Remember Filming 'Friends'
By Jordyn Tilchen and Sam Ramsden
Get Even More From Bustle — Sign Up For The Newsletter