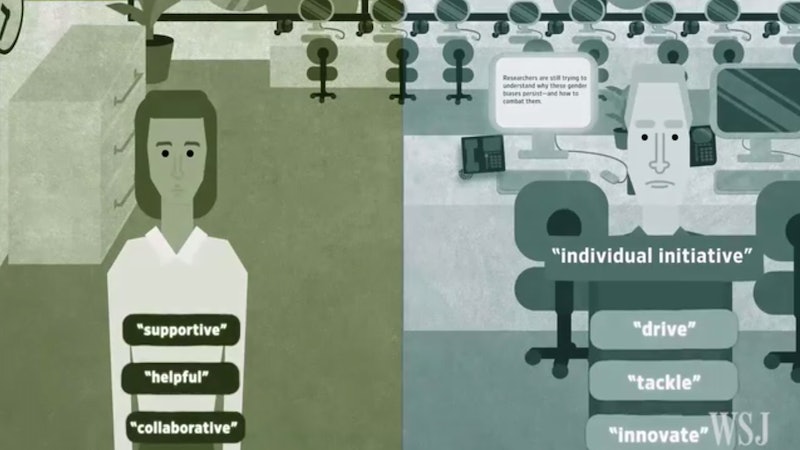 In recent years, a number of scientific studies as well as popular articles and books like Lean In have shown us that gender discrimination in the workplace is a real and troubling phenomenon. In the video "Why Women Get Different Feedback at Work" and an accompanying series about women in the workplace, The Wall Street Journal explains some of the gender biases in professional settings that have recently been brought to light.

"Why Women Get Different Feedback at Work" focuses on performance reviews, which — in case you've never had one — is a regular assessment from a supervisor on what an employee's strengths are and where there's room for improvement. Most bosses would probably like to think of themselves as egalitarian enough to give the same performance reviews to men and women with the same, well, performance. But the data shows that this simply doesn't happen.

The research on gender bias in performance reviews described in the video demonstrates a number of disturbing incongruences. First of all, the women in the reviews studied were more often praised for being "supportive," "collaborative," and "helpful" than the men, while men's reviews were twice as likely to contain words related to assertiveness like "drive," "tackle," and "innovate." Men's feedback was also twice as often related to technical expertise and cited specific business outcomes three times as often.

"But what if women just have different communication styles?" you might ask. Well, that might sort of make sense, if it weren't for this next bit of data: Women are also more likely to be criticized for speaking too aggressively.

The double-bind is real: Women are "bossy" if they're assertive, but if they're not, they're deemed less fit for promotions, which supervisors usually associated with "masculine" qualities.

While I'd like to advise you to look out for these biases in your own performance reviews, I know there can be some tricky politics involved with calling out a boss. If you yourself are a boss, though — regardless of your gender (the research showed the reviewer's gender didn't make a difference) — I'd challenge you to examine the language you're using in reviews and informal feedback and ask yourself whether you'd say the same thing to someone of a different gender.