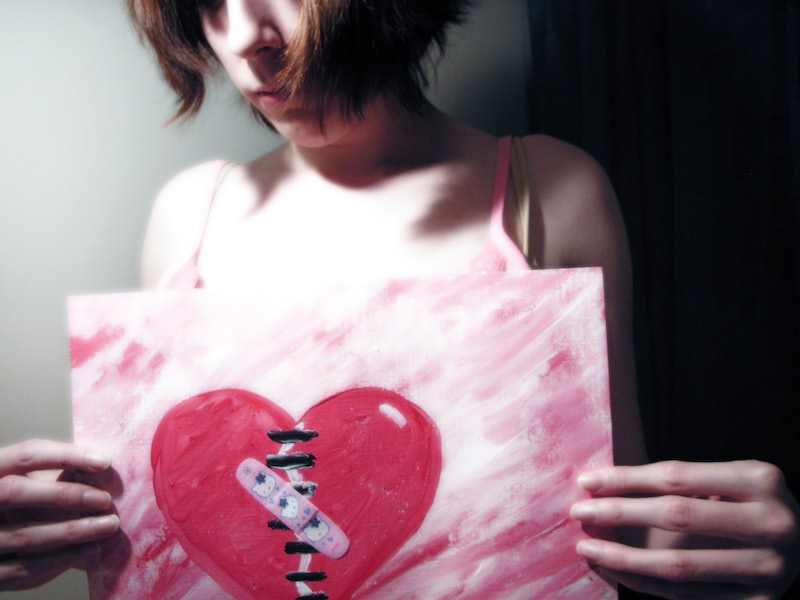 A friend once told me his test of whether he's over an ex is whether it would bother him if they were dating someone else. Under that logic, I've never gotten over anyone in my life. Months and sometimes years after a relationship, my heart rate still accelerates when I see an ex is dating someone new on Facebook.

Over a year after I ended one relationship, I found some photos on Facebook of my ex with a woman I didn't recognize. "Maybe she's just a friend," I thought — until I saw comments from her friends like "he's a cutie!" and "good choice!" I felt sick to my stomach. It was like we were still together and he cheated. I wasn't entitled to feel this way — I broke up with him!

After I last spoke to another fling I never even officially dated, I made sure to unfollow him on Facebook so I didn't have a similar experience. But that didn't stop his new profile picture, with an unknown woman next to him. (Sure, she could be a friend, but seeing two people in the same profile picture is basically a giveaway.) Again, I didn't feel I had the right to be upset. We were never exclusive and hadn't spoken in six months! What was going on?

After doing some soul searching, I realized my reasons were different for each person. With the first ex, I still relied on him for emotional support the way I did when we were dating, and seeing him with someone else made me wonder if we could still have as close a relationship. Plus, when I broke up with him, he said he refused to move on and planned to marry me — a promise he obviously couldn't keep, but it planted in the back of my mind the assumption that if I ever had a change of heart, he would be there. With the second (non) ex, I realized there was an ounce of hope lingering in me that maybe we would reunite one day, and seeing that he was no longer available crushed it.

I know I'm not alone in feeling devastated over an ex moving on. A lot of my friends have confessed they've felt the same way, especially when they're forced to find out through social media. Discomfort with an ex publicly pairing up again is also acknowledged in pop culture; after Marnie breaks up with Charlie on Girls, she obsesses over the other woman she sees in his Facebook photos.

"Most people don't want to feel expendable, rejected, or out of control," sex and relationships therapist Cathy Beaton tells Bustle. Beaton would advise people who are upset when their exes move on: "Put this person in your past where he belongs, think of what you've learned from the experience, and get busy finding another partner who appreciates you."

Here are some things I remind myself to get through this process:

Your ex did not get an upgrade. The person they're dating now is not necessarily smarter, more attractive, or kinder than you. The fact that you broke up wasn't a failure on your part; things just didn't work out, and they might not work out with this new person either. Your ex moving on is not a testament to your inadequacy.

It's the worst when your ex's new significant other is someone you don't even like. It can make you start to question yourself: "If that's what he's into, am I like that?" No. One person can date two very different people. Comparing yourself to your ex's new partner, whether to wonder if they're better than you or to wonder if they're similar to you, will lead you down the wrong line of reasoning. People don't choose people based on checklists; each person will appeal to someone for a different reason.

3. This Doesn't Erase What You Two Had

Whatever Beyonce may say, nobody's replaceable. Your ex's new significant other is not your replacement. Your relationship was unique and special and nothing can ever take away from that. Your ex will never experience with this new person exactly what they did with you. You get to be the one who made rainbow cake with them or first showed them Arrested Development or whatever made your relationship special. Even if they do some of these same things with their current partner, they will never recreate your entire relationship. The memories you two have together are yours and yours alone.

If your ex moved on before you did, you might feel as if they won or wonder why you didn't find someone else first. However, how quickly you get into a relationship isn't a measure of how desirable you are. Look around at the people you know. It's not necessarily the most attractive or likable people who get into relationships the most easily. Your ex just happened to stumble upon someone else before you did. That doesn't reflect poorly on you.

5. They Still Care About You

When my ex first got a new girlfriend, I feared that it endangered the friendship we formed post-breakup. But even if it changed the dynamics of our relationship a bit, it didn't change how he felt. Getting into relationships in the past at least hasn't changed the way I cared about my exes. If anything, it has helped me know that my friendships with exes were genuine and not ploys to get back together. If you can confide in your ex about your current relationship, perhaps that's the ultimate sign you've moved on — to a friendship that's just as special.