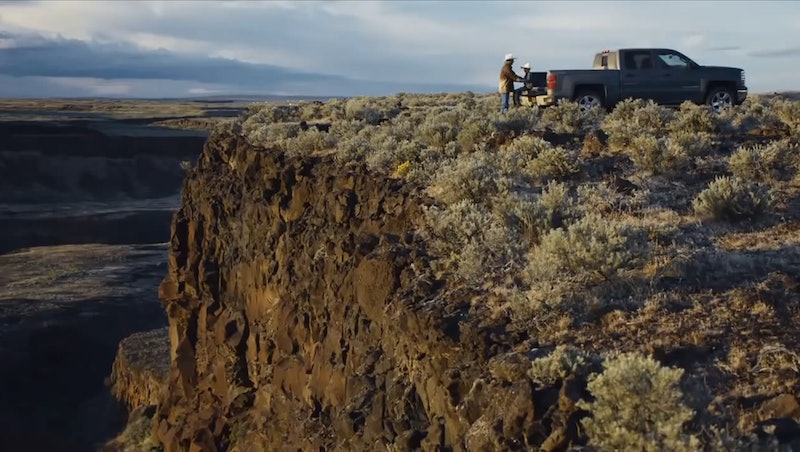 While you may think of Chevrolet trucks as the manliest of manly cars, the rugged masculinity these vehicles convey seems to have shifted in the past couple of decades. Slate points out that the ads for Chevy trucks in the 1990s relied on the idea of men as burly individualists, some sort of cowboy-meets-construction-worker. Chevy's most recent marketing techniques, however, depict men as well-rounded dads with lots of muscle and hearts of gold.

Chevrolet's "Like A Rock" ad campaign first launched in 1991. The ads use Bob Seger's song of the same name, which is all about being young, free, and independent — all things that owning a Chevy truck could give you, apparently.

Their 2013 ad campaign shows some significant change to popular conceptions of masculinity. In the ad for their newest Silverado truck, the car company opted instead to show the Chevy man as a family man, who holds his wife's hand and comforts his son after a Little League game.

Here, again, the musical choice is telling. Seger gets the boot in favor of Will Hoge's song "Strong." Forget rugged individualism, because the new Chevy man "ain't just tough – he's stroooooong." It's like Hoge is talking for the truck: "He's a 20 year straight get to work on time/ He's a love one woman for all his life/ He's a shirt off his back give you his last dime/ He's strong."

The modern Chevy man is generous, works hard, and stays faithful to the woman he loves. Oh, and it just so happens that the woman he loves is also probably the one telling him which car to buy. According to industry polls, 85 percent of all vehicle purchasing decisions in the U.S. are influenced by women. Wherever it's coming from, it's nice to see that car giants are selling this more well-rounded version of masculinity.

More like this
Footballer Jake Daniels Shared His Thoughts On A World Cup Boycott
By Sam Ramsden
Wimbledon Alters All-White Kit Rule Amid Candid Period Discussions
By Catharina Cheung and Rachel Mantock
Here’s How To Find Your Spotify Wrapped
By Emma Lord and Emma Carey
Daily Horoscope For December 1, 2022
By Mecca Woods
Get Even More From Bustle — Sign Up For The Newsletter