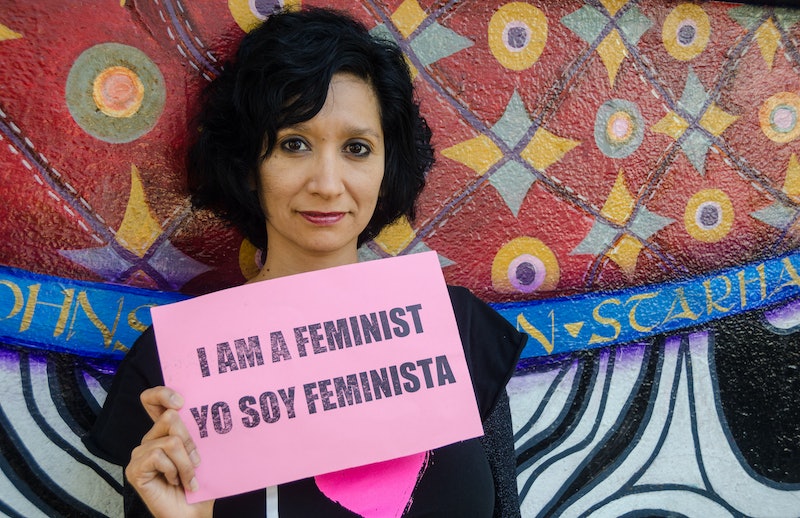 Feminism is a big word with a lot of meaning behind it and a lot of work to be done. Being a feminist means you want to make a difference for women’s rights. It means learning about and including the experiences of women everywhere. It means practicing feminism in your everyday life. It means getting your read on and making sure you know what’s going on with women and women’s issues. It means different things to different people.

We often turn to fiction for feminist themes and characters and representations, and there are some really great works of fiction with dope feminist agendas and ideas. But sometimes you’ve gotta set down the motifs and metaphors for some hardcore fact instead. Luckily there’s a lot of really great nonfiction out there that can illuminate the complexities of feminism for anyone, from the newbie feminist to the seasoned women’s rights activist.

Feminism is deep, y’all, and the issues are always evolving. So, anyone, no matter how immersed or active you are as a feminist, could stand to learn more about the different issues and perspectives that drive feminism. Whether you’re just coming into your own as a feminist, or whether you’re trying to expand your understanding of what it means to be a feminist, these are some of the nonfiction books that every feminist should get her hands on.

Audre Lorde was a poet, so it’s no surprise that even in her essays and prose, she manages to speak powerfully and beautifully about feminism. Audre Lorde was also a major badass and didn’t pull punches. In this collection she covers everything from sexism to gender to ageism and classism. And she does it all like a boss— like a magical poet boss.

The Madwoman in the Attic by Sandra Gilbert and Susan Gubar

For literature-lovers, this is an absolute must. Taking on the classics of 19th century literature from a feminist perspective, it’ll change how you think about some of your favorite classic novels.

Working class women were a crucial force behind the great social movements of the '60s and the '70s in the U.S. Through the personal stories of some of the working women who organized, protested, rebelled, and marched, Nadasen corrects the gap in history’s memory where these insanely dope women were making things happen.

Gender Trouble took the long-held notions about gender and ripped them apart, taking traditional notions of femininity to task and challenging people to rethink what gender means. You should definitely pick up the 10th anniversary edition so you can read up in the introduction how Butler’s views have evolved since 1990.

Ain’t I A Woman? by bell hooks

A Cup Of Water Under My Bed by Daisy Hernandez

The feminist movement is super-complex and dynamic. Through the story of her own life, Daisy Hernandez shows just how complex. So many issues of identity, family life, politics, and social justice intersect in any individual woman’s life, and Hernandez writes beautifully about her experience and how it is irrevocably connected to the experience of all women.

The Beauty Myth by Naomi Wolf

From beer commercials to music videos to the “health” and diet industry, women are attacked on a daily basis with images and expectations that reinforce the idea that we’re all supposed to be pretty little homemakers. Wolf shines the spotlight on these practices and reveals them for the ugly myths and exploitation they are. It's an oldie but a goodie, and we could all use a reminder to not let these not-so-subtle media messages influence us.

History might try to overlook the women of the Civil Rights and Black Power movements, but women like Assata Shakur, Kathleen Cleaver, Rosa Parks, and so many more were crucial to the successes of these movements. Through Shakur's experience you get a picture of what it was like to be a woman during some of the most powerful movements in American history.

Davis shows that the women’s suffrage movement wasn’t exactly the righteous solidarity movement it’s often portrayed as. She reveals that there was all sorts of classist and racist problems that hindered and divided the movement, and with a whole bunch of historical evidence she shows that the only way forward is if workers and women of all races unite.

Understanding sexual violence and working against it is crucial to feminism. Conquest looks at sexual violence on a global and local scale, evaluating it as a tool of oppression and looking at the disproportionately high rates of sexual violence against Native women. It’s a hard book to read, but a necessary one. Also Smith is the badass activist who founded INCITE! Women of Color Against Violence, so you should totally support her work.

Bornstein explodes traditional views of gender. With an armful of research and her own experience of transitioning from heterosexual male to lesbian woman, she makes you question everything you know about gender and gives the status quo a big old boot.