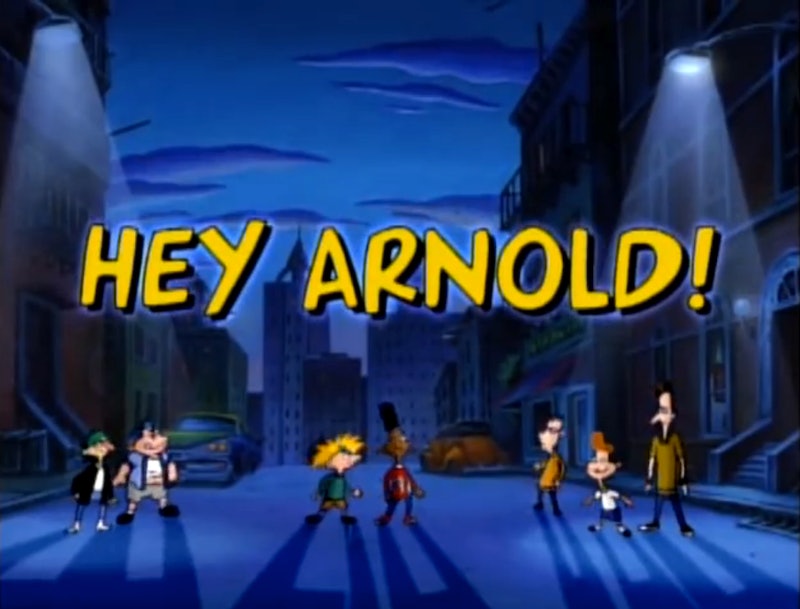 Attention all you '90s and early 2000s nostalgics: you guys are in for a treat. Today, I invite you to take a trek down a road paved with football-headed protagonists, animation, and "splat" noises. I, of course, am talking about Hey Arnold!, Nickelodeon's 1996 animated series about a nine-year-old prodigy with a particularly horizontal cranium, and his eclectic band of friends and family who dwelled the city streets of Hillwood. There is a reason for the recent resurgence of '90s and early 2000s nostalgia accumulating throughout the Internet — and Hey Arnold! is a prime example of why millenials like myself are more than game to engage in some Nicktoons-themed reveries.

From the titular "Stoop Kid" storyline, to Helga's thinly veiled infatuation with Arnold, and a plethora of relatable lessons that made the series a worthwhile viewing experience for both children and adults, the show is one that many fans are anxious to revisit again, and again, and ag—well, you see where I'm going with this.

Like many great series, Hey Arnold! didn't slack when it came to delivering a truly on fleek opening. In fact, the opening credits are probably one of the best — nay, the best — in the history of every television show ever (sorry, Friends). I would like to give the composer of the jazzy intro a medal, as I still find myself humming the tune while sitting in traffic. Ah, nostalgia!

But there are so many facets to the opening that make it great — an impressive feat, giving that opening credits are usually less than a minute long. In case you doubt me, here are seven reasons that — as opening credits go — Hey Arnold! is the certifiable winner.

1. The Secret Handshake You Adopted As Your Own

Arnold and Gerald were the ultimate #FriendshipGoals.

2. Helga's Obsession With Arnold Was Spotlighted

One of my favorite running storylines in the show was Helga's secret obsession with Arnold — the compassionate protagonist she tormented in order to keep up the ruse that he was anything but the object of her desire. The credits are punctuated with Helga constantly screaming, "Hey Arnold!" She shouts his name from her bedroom, out the window of a bus, and even has it scrawled onto the pavement just to cement (pun intended) the fact that she is so not into him.

3. This Lesson About Not Judging A Book By Its Cover

Although Harold was often seen as an antagonist, the resident bully displayed his sensitive side and became nuanced throughout the series. In mere seconds, these complexities are revealed when Harold's mood takes a friendly turn once his face is cast in the beam of Arnold's flashlight. Symbolism, anybody?

She really wanted to get his attention.

Friendships are the best ships — amiright?

7. When Arnold Is The Most Chivalrous Cartoon Ever

After spending the entire opening screaming for Arnold's attention, Helga promptly snipes, "Move it, football head!" Being the pillar of compassion and patience that he is, Arnold offers a "ladies first" gesture and a genial grin. What a gem!

Go relive the opening credits in full by viewing the video below. Then, I suggest you promptly cancel any plans you had for the rest of the day, and binge-watch this series in all its glory.