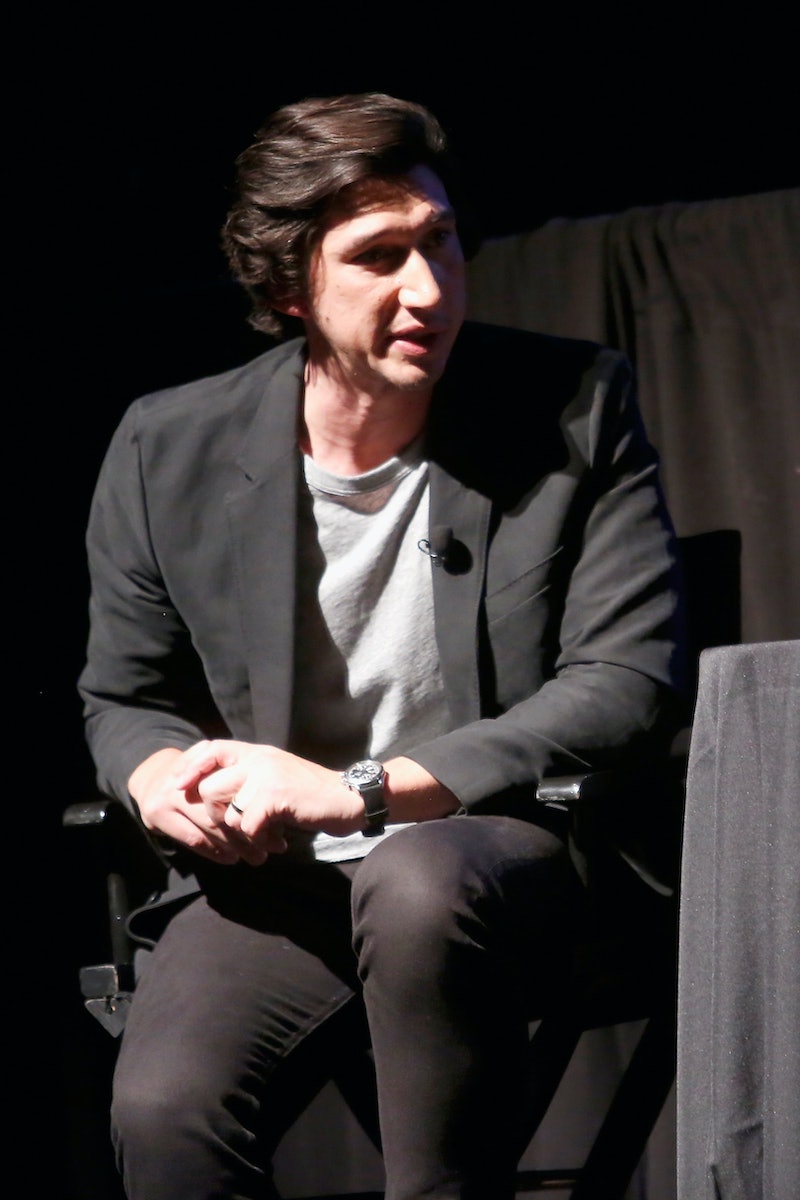 While he'll probably never not be known as Adam from Girls , Adam Driver might just have another iconic name to add to his list come December. As most pop culture fans and Star Wars devotees already know: Driver plays villain Kylo Ren in The Force Awakens, the black hooded figure with the red lightsaber shaped like a cross (you know, the one that angered quite a few Lucas devotees when images first surfaced). While we do know things like, Kylo Ren isn't is his real name and that he's obsessed with Darth Vader (who died almost 30 years before this new film takes place) thanks to an Entertainment Weekly interview with director J.J. Abrams, we still don't know the most important question of all: Will Kylo Ren live up to Star Wars' fans standards? Or is he looking at a Darth Maul-type fate? (Sorry, Darth Maul.)

At his New Yorker Festival talk on Oct. 3, Driver put us (or at least me) at ease a bit when speaking about what it was like to work with Abrams. "I think I've been spoiled though as far as big blockbuster movies are concerned, because while this is certainly one of them, even though it's this huge, moving machine, I think because J.J. was directing it, it felt very much similar to While We're Young." (Driver is referring to a Noah Baumbach movie in which Driver played a quirky hipster-type.) "Obviously, they're different, but the conversation about character was the first thing [J.J. and I] talked about. There was nothing to take a back seat to the spectacle of it or the special effects."

I don't know about you, but that little moment in his hour-and-half-long talk gave me a wave of hope. One of the major problems, for me, as a viewer of the prequel Star Wars trilogy was that the entire film felt like it was more about the spectacle than these characters whose stories fans had always wondered about. There were new characters and new fangled reasons for why things happened the way they happened. There were new creatures and new technologies. But the characters whose fates we were supposed to be so tied to felt dimmed in the light of everything else.

But it shouldn't be so tough, according to Driver. "I think if the writing is good and the atmosphere around you is about telling the story, then it's not so foreign, I think, even though it is in a long time ago in a galaxy far away," he said.

The fact that Driver, whose New Yorker talked proved that at the heart of it all, he cares deeply about his characters (in fact at one point he said that he'd never do an acting gig solely for money ever again, "If I can avoid it") is so on board with this new Star Wars movie is really heartening. This Julliard-trained actor, who came up through the theater and is now giving talks on acting ($40-a-ticket talks, at that), is simply stoked on Star Wars and the way Abrams directed him for the film.

Now, if that doesn't instill some faith in Star Wars fans everywhere, I don't know what will.