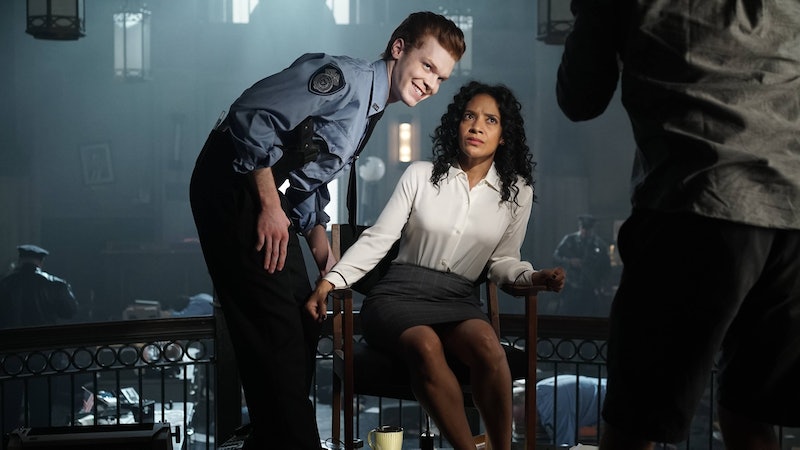 Since the Gotham writers have been hinting (and sometimes even confirming) that some of their characters are based on already existing Batman foes, it would make perfect sense if new villain team-up the Maniax were from DC Comics. And they do have some slight inspiration, at least in terms of their name. The closest thing to the name "Maniax" out there, pointed out by the Hollywood Reporter, is a fictional band called the "Maniaks." Not quite the same as a group of killers plotting to take over the city, but it's undeniable that the excellent name had to be used — unconventional spelling included. I mean, it works perfectly for the group of escaped convicts from Arkham Asylum. However, there's no other team with the name "Maniax" or "Maniacs" to be found in the DC canon. That much is unique to Gotham.

But even though the Maniax are also primarily made up of Gotham's original characters, they could evolve into just about anything (except for maybe the Justice League). Villainous groups and teams have always been a part of comic book mythology, and writers seem to love thinking about what would happen if different bad guys worked together. Here are some of the most notable DC Comics villain teams, and their potential to be revealed as the Maniax.

When Galavan gathered his bad guys this was the obvious comparison, especially because the 2016 Suicide Squad movie has this group on everyone's minds, not to mention that Barbara has been throwing off some serious Harley Quinn vibes . Other than that, however, the Maniax are not particularly like the Squad, since they're not going after other villains, but innocent Gothamites.

The League Of Assassins

The group run by Ra's al Ghul is made up of the DC Universe's deadliest assassins, and while the Maniax aren't quite that polished yet, they are also filled with a bunch of villains who are thirsty to find an evil calling. Maybe Galavan will be the one to unify them. One thing that makes it less likely is that Arrow is already doing its own take on the League.

The Secret Society Of Supervillains

The only real similarity between the Secret Society of Supervillains and the Maniax is that they dissolve into infighting easily. Already in just two episodes, both Sionis and Dobkins were killed for betraying the group, and there's been struggle over who will become the leader.

This group is spearheaded by Superman foe Lex Luthor, but Galavan actually has a lot in common with the villain. Both are billionaires with lofty plans, which they don't always share with their underlings, who do the bulk of the legwork. Maybe Gotham will put a new, Batman-twist on this group.

As the name would imply, the Injustice League was formed as the opposite of the Justice League. It's one of the few teams that's been able to rope in the Joker, and since Jerome might be Gotham's Joker, it makes sense that he's involved, despite the character not often working well with others.

The Court Of Owls

In an interview with ComicBook.com, Gotham showrunner Bruno Heller said that he's interested in bringing the Court of Owls to the show, but didn't specify when or how. The Maniax could be an early version of the Court of Owls, which are basically the Gotham Illuminati. They control the city through money and real estate, and it's been noticed that Galavan seems to be preparing plans for a new skyscraper at some point in the season.

Though most of the Maniax would have no part in the Court of Owls, since Barbara is the only rich member, if Heller is looking for a way to bring the group to Gotham, this Maniax arc seems like the perfect opportunity.