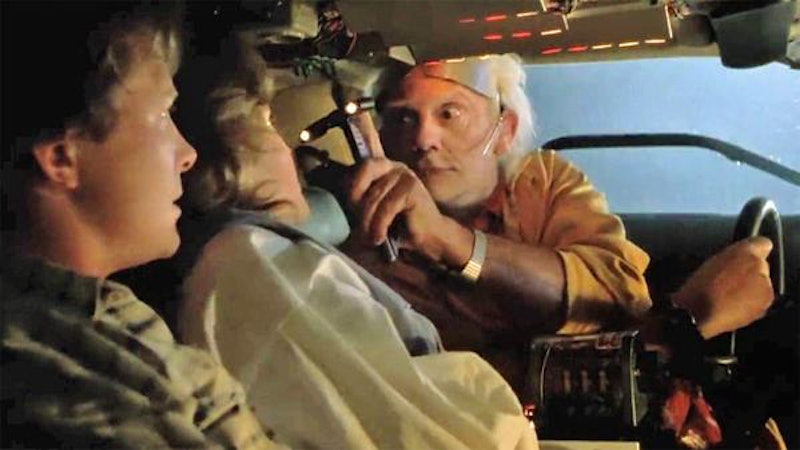 I don't know why, but, every once in a while, a fake meme goes around that claims any random day is the day that Back to the Future Part II takes place. The Internet falls for it every time, mostly because it's a dumb thing to lie about. But—no joking around this time—today is actually the day that Marty McFly and Doc Brown travel to in order to save Marty's kids from a life doomed to failure by the Tannen family. All of the action from Back to the Future Part II goes down on Wednesday, October 21, 2015.

Back in 1989, when the movie was first released, 2015 seemed so far away, and the future seemed so, well, futuristic. So, how does the real 2015 stack up against the vision that director Robert Zemeckis and company made a quarter of a century ago? Well, there are some things that, obviously, still haven't turned up yet in the "future," like hoverboards (more on that in a minute). And yet, there are things that we have now that Marty McFly never could have dreamed of—amazing things—like cell phones or the Internet. Here, some of the major ways that Back to the Future 's 2015 differs from the 2015 we know today.

Of course we need roads. Our cars may be hybrids with back-up cameras that can drive and park themselves, but, for now, our traffic is still earth-bound. According to NBC News, Toyota is developing a flying (or hovering) car, but the main modes of our vehicular travel remains terrestrial. And our crazy drivers are bad enough swerving around on land, I can't imagine what it'd be like if we had sky highways, too.

Doc Sets His Watch To The Weather

When Doc checks his watch, he gets an up-to-the-second weather report. Think someone at Apple or Pebble noticed?

Oh, the indignity we still suffer, tying our own shoes like suckers. But this chore isn't going away any time soon. Time reports that Nike will release shoes with "power laces" sometime this year, but they're just replicas of the ones from the movie sold on a limited-edition basis. Mostly, we're stuck tying our own damn shoes. I'd settle for Back to the Future's self-fitting and self-drying clothes, too, even though I wouldn't—as Doc asserted—wear my pockets turned out, which he swore was the 2015 trend. But we don't have those, either. The fashion industry of today has to step up its tech game.

Doc makes an offhand remark about how, by 2015, we've "abolished all lawyers." Ha! How many people do you know in law school right now? Better warn them to switch careers.

Unfortunately, the Jaws series topped out at four movies, so we'll never get to see what that pesky shark has been up to in the intervening years. Still, the idea of Jaws 19, which does have its own trailer, is kind of a prescient joke, because sequels—many of them in 3D, which is close enough to a hologram—are getting up there in numbers. Who could've guessed that 2015 would be the year we'd see the seventh installment of The Fast and the Furious franchise?

And yet, I'm not jealous. This seems needlessly robotic and elaborate, and not all that different from the vending machines of 1985, let alone 2015. Yet, if you want to taste a "Pepsi Perfect," Pepsi has your back today.

"You Have You Use Your Hands? It's Like A Baby Toy."

A couple of kids—including a baby Elijah Wood!—tell Marty that his throwback '80s arcade game, with its hand-controlled play, is old school. And it kind of is, now that we have game consoles like the Wii U, Kinect, and Playstation Move that you can control just by motion. I don't think anyone would call regular game consoles baby toys, but hands-free gaming is definitely a reality.

Every kid I know burned with desire to ride a hoverboard some day. It was my generation's most disillusioning moment when we realized that they wouldn't be commonplace by 2015. But, when it comes to subverting Earth's gravity, better late than never, right? Companies are working on developing hoverboards, so the dream isn't totally dead. One such company, Slide, has a hoverboard that works, too—if you ride it over a field of magnets. It's not going to be something that every kid has in his or her garage, but we're on our way to building some boss hoverparks.

Okay, so we don't have instantly re-hydrated pizza, either, but we have Seamless, which is just as effortless, so I think we're okay.

One of Marty's greatest fears about the future is that he'd somehow have a family that is, in his words, full of assholes. His kids get phone calls on their eyewear, so, technically, they're actually glassholes.

More Highs And Lows Of Communication

They may not have the Internet or cell phones, but the picture phones of Back to the Future's 2015 certainly look like the FaceTime/Google Hangouts of today. You might think the fictional 2015 even has the advantage, because their screens are nice and big. But, they still have to send faxes to each other. Faxes! One of the best reasons to be alive today is knowing that we don't have to deal with fax machines anymore.

So much of the plot of Back to the Future Part II revolves around sports betting with some kind of time-travel advantage. If you were going to use the movie as your cheat, you'd bet it all on the Cubs winning the World Series this year against Miami. Um...don't do that. I mean, it's possible they could win (just not against Miami), but if you profit off of it, that totally makes you a Biff.

So, Back to the Future Part II didn't give us a perfect picture of 2015 way back in the '80s when it came out. That's okay. As Doc points out, the moral of the whole movie is that no one should know too much about their future. If we did, we'd all be investing in hoverboard stock instead of trying to create the future ourselves.

More like this
Lewis Hamilton Turned Down A Role In 'Top Gun: Maverick' For This Surprising Reason
By Darshita Goyal
Revisit 1992’s 'A League Of Their Own Cast' Photos After The New TV Series
By Grace Wehniainen
At 28, Lesley Manville Was Acting, Picketing, & Singing Kate Bush Songs
By Olivia-Anne Cleary
Naomi Osaka & Emma Raducanu’s Experiences Have Inspired A New Amazon Show
By El Hunt
Get Even More From Bustle — Sign Up For The Newsletter