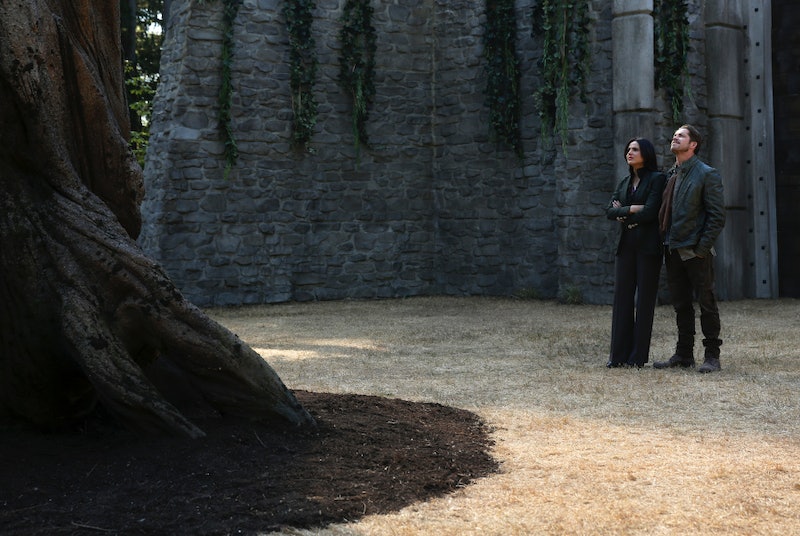 It's time to start cutting Regina some slack on Once Upon A Time . The Evil Queen is known as the Evil Queen for a reason, and has most certainly left a trail of destruction behind her. But now, she's not the most feared out there in the land. With Storybrooke's former Savior currently busy being the Dark One, can Regina become the new Savior? The town desperately needs someone to fight for them, seeing as how demons from the Underworld are already running amok. And it's only the second episode of the season!

Ever since Regina and Henry's "true love" kiss back in Season 3, it feels like Regina has slowly been trying to turn good. No more taking over kingdoms and casting curses for this girl. Honestly, her decision to go on the straight and narrow path has been working, especially since Robin Hood came into the picture. She wants to be good for him, and for Henry, and for Roland, too.

But now Regina can't just try to be better, she has to be better. This is really a "do or do not" situation. Emma is completely lost in her dark magic, and she's wiped everyone's memory for a reason. The town needs someone to save them from whatever hell Emma is bound to unleash, and there's only one woman who can even stand to go up against her. And that's Regina.

Can she do it? The beginning of the episode was a little iffy, since she wasn't the one to bring Robin Hood back to life (and that's a completely different story). However, the second time he's captured and almost killed, Regina totally steps up to the plate. There's been a fury unleashed from the Underworld — and OUAT, this better be a huge set up for Hercules — and no one's really sure how to defeat it, including Regina.

When the time comes to fight the fury, Regina doesn't even think twice about throwing herself into danger's way. She just does it. Isn't the first step to becoming the Savior ignoring your own needs for the sake of others? Emma's certainly done that enough, and now Regina has, too.

Regina's still got a long way to go before everyone thinks of her as the Savior, but she's moving in the right direction. She's now taken down a fury. Next obstacle, the Dark One.