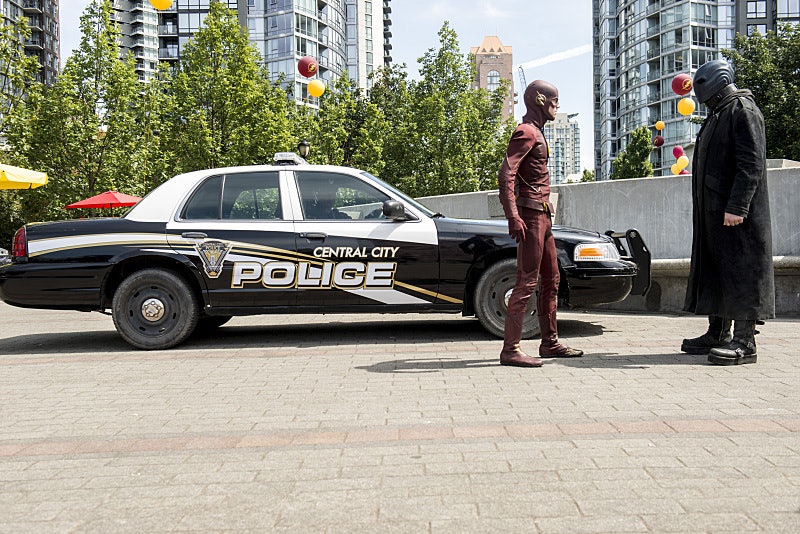 So the Reverse-Flash was just a bit of a warm-up, then? Barry Allen and the rest of the unofficial defenders of Central City bested Eobard Thawne, aka the Reverse-Flash, aka the commandeered body of good guy scientist Harrison Wells in the first season finale of The Flash. Sure, it took Eddie figuratively falling on his sword to erase the Reverse-Flash from existence, but still: it was all-in-all a win. Of course, with another year of crime fighting and running really, really fast to look forward to as The Flash Season 2 premiere approaches, the show has used the summer to reload on a stable of proper bad guys to terrorize the town. You didn't think Barry was done, did you? Of course The Flash will have new villains in Season 2.

Granted, Eboard Thawne wasn't the only threat in Season 1. He was just the worst, and the most personal. Team Flash didn't realize they were just prepping for him by battling a list of villainous metahumans throughout the season, including Captain Cold, Gorilla Grodd, and the Pied Piper. So the creative team behind the show hasn't just teased one nemesis for the upcoming season, but several; and it's likely that this list will only grow as the year goes on. Is one of these villains the traditional Big Bad? Or will that honor fall to someone fans won't see coming? Let's meet the contestants.

First up in the ring is Atom-Smasher, who Team Flash will run up against in the Season 2 premiere. Played by Adam Copeland, who went by the nickname Edge when he was a wrestler (um, careful out there Barry!) according to Screen Rant, this baddie is known for his, you guessed it, super-human strength. Atom SMASH.

While Sand Demon isn't an officially announced villainous presence for Season 2, The CW does identify the man on the right in this photo of Jay Garrick (Teddy Sears) as "Eddie Slick," the metahuman's alter-ego. In DC comic book lore, Slick is associated with Firestorm and Martin Stein, and can control sand in his heightened state. Field trip to the beach, anyone?

A bit of good old fashioned earth-bound evil comes in the form of Lewis Snart, proud papa of Leonard and Lisa, more deviously known as Captain Cold and Golden Glider. Snart is a "career criminal," according to The Hollywood Reporter, whose new-found freedom may pose a threat to The Flash and his nemeses alike. He's played by the very intense-looking Michael Ironside.

This fellow has yet to be cast, though Andrew Kreisberg did tell attendees of WonderCon this summer to look forward to his appearance. As you may have guessed from the name, Doctor Alchemy can transfigure objects and materials; think Transfiguration class at Hogwarts, just 10 times more evil.

Also teased at WonderCon, Mirror Master is basically a fun house in the form of a person. (But not fun.) I'd be worried about The Flash making a guy who controls mirrors scary, but hey, it managed to make us all fear a rogue gorilla.

If an immortal bad guy sounds better suited to the upcoming CW Flash and Arrow spinoff Legends Of Tomorrow, which is set to go heavy on the time travel, it should. Vandal Savage will be played on the new series by Casper Crump and will have a significant role, according to The Hollywood Reporter. But before that, his place in the universe will be set up in a couple of crossover episodes. At least he won't be Barry's problem forever. (And he could be! He never dies.)

Still unconfirmed: Killer Frost. The Flash finale gave fans a split-second tease of the nasty side of S.T.A.R. Labs sweetheart Caitlin Snow; maybe Killer Frost will show up in Season 2 and stick around this time.