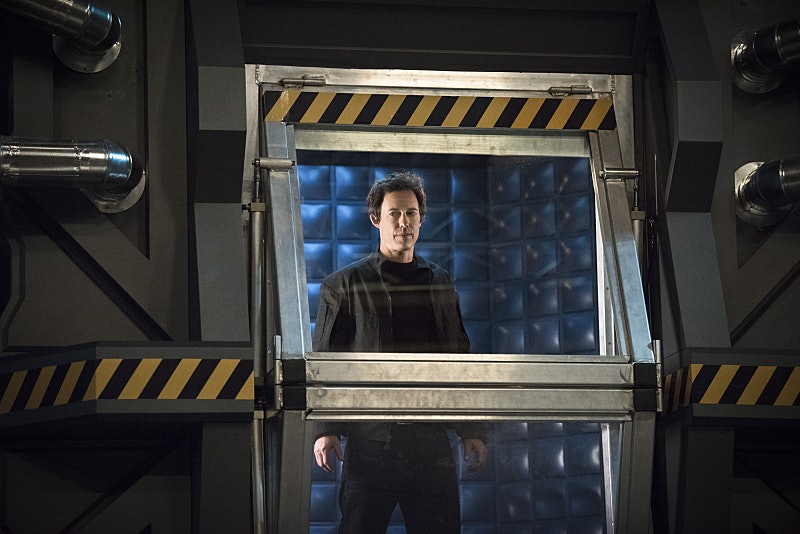 For an evil villain, Eobard Thawne sure has an heroic endgame — he just wants to go home. It's an innocent enough request, save for the many lives he's taken along the way. Though he may be in the pipeline leading up to the season finale, if the Reverse-Flash's plan works, will Harrison Wells be in The Flash Season 2? I know he doesn't want to be, but he may not have a choice.

There's no word yet on who will be in the core cast next year. However, The CW is no dummy and there's no way that The Flash would get rid of its most talked-about character. Every hero needs a nemesis, and Eobard Thawne has promised Barry Allen fun-filled decades of epic showdowns. Not to mention, who would I write about if Eobard Thawne successfully went back to the future? I've had way too much fun over the past season talking about Harrison Wells and his telegrams from tomorrow in his lairs on lairs on lairs. The Flash just wouldn't be The Flash without Tom Cavenaugh.

Here are a few ways that Harrison Wells could stick around for Season 2 of The Flash. Eobard Thawne may make like a tree and get out of there, but we haven't seen the last of Wells.

Eobard Thawne is planning on reactivating the particle accelerator that released dark matter into Central City and created metahumans in the first — as far as we know — place. It wasn't exactly a success that first time. What if it fails a second time? What if the team is able to sabotauge it, trapping Wells in the past for just 22 episodes longer?

We know that Barry is planning to go back to the night of his mother's murder. We've seen as much in the promos for the finale. If he is successful, he could create a world in which Harrison Wells is an untouched scientist with no evil agenda and no obligations past Season 1. However, it seems obvious to me that the reason Barry Allen's adult DNA was at the crime scene is because when he goes back, he finds that he can't save his mother. He's already seen it happen. He's already seen himself there. There's no other outcome. The only person he will be able to save is himself.

If all things fail (and by "fail" I mean "succeed" if you're Eobard Thawne) and Harrison Wells does get to do more than phone home, I'm sure we'll see Tom Cavenaugh's take on one or both characters in some capacity. Barry Allen could take some trips to the future to take on his nemesis. We could also benefit from a little backstory. What was Wells/Thawne up to during Barry's childhood? What other cards was he setting into place?

The Return of Harrison Wells

So here's a theory that'll twist your noodle. What if, in some other way, the real Harrison Wells returns to life? Harry Potter got to pal around with Professor Moody after Barty Crouch's jig was up, so why not Wells? They dug up his original body for a reason. Surely Eobard Thawne can spit his essence back out.

Plus, it's entirely possible that Eobard Thawne wasn't supposed to kill Wells and needs to restore life to him in order to preserve the future he wants to return to vis a vis this already complex plan. Was Harrison Wells 1.0 living in the future that Eobard Thawne came from, I wonder? Thawne's work likely has revolved around keeping the timeline on track because Wells was removed from it, but once he goes, Wells goes too.

As much fun as it was to see Tom Cavenaugh smirk his way through Season 1, his secret's out now. Bringing back the prime Harrison Wells would be a good way to keep the actor around while introducing a new dynamic in Season 2.

More like this
Does 'Locke & Key’s Ending Mean There Could Be A Season 4?
By Sophia Moore
The 'PLL: Original Sin' Creators Say A’s Identity Will Be “Very Clear” By The Season Finale
By Alyssa Lapid
'The Simpsons' Will *Finally* Address How They “Predict The Future”
By Sam Ramsden
'The Flash' Officially Ends Its Run With A Shortened Season 9
By Brad Witter
Get Even More From Bustle — Sign Up For The Newsletter