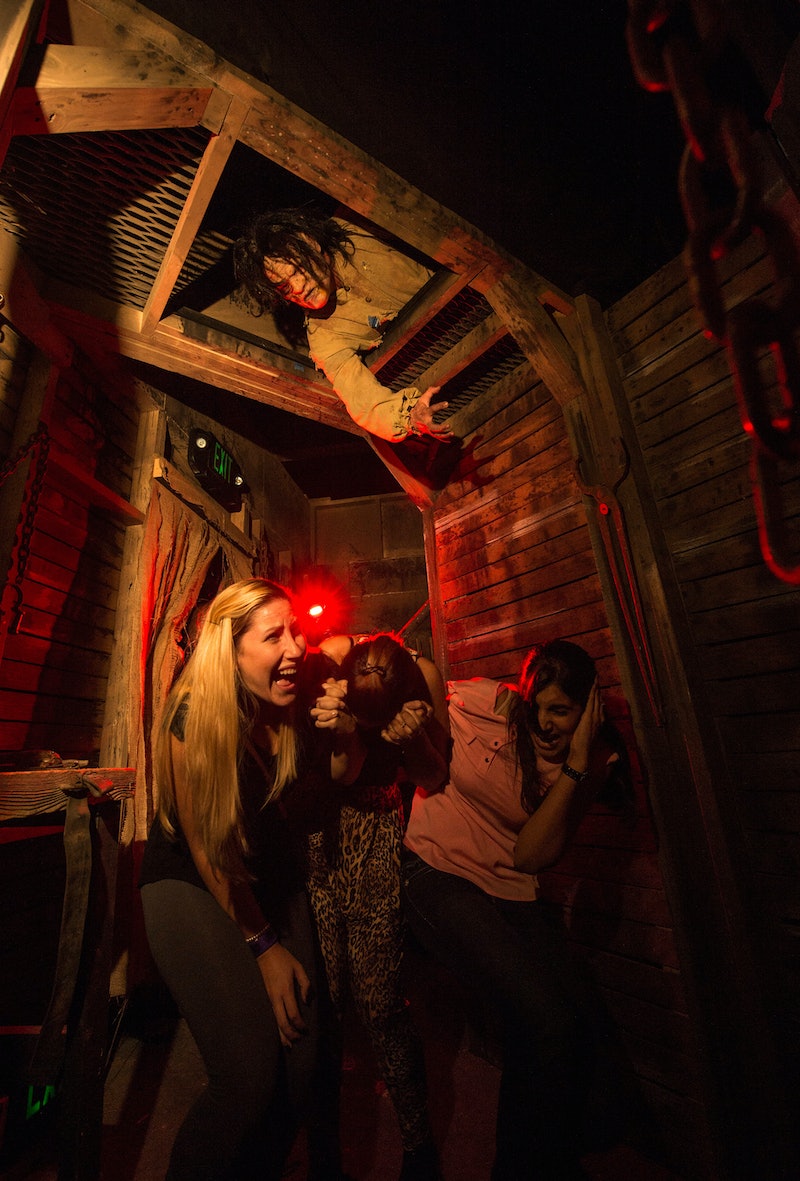 There's so much more to Halloween than dressing up in costumes and eating the giant bag of candy you bought to give trick-or-treaters. One of the best parts about this time of year is the fact that the spookiness of every day life is not only allowed, but encouraged. Who doesn't love some scary decorations of skeletons propped up outside of houses, or a good ol' haunted hayride?

I certainly love and embrace it all, but one of my favorite things to do this time of year is read ghost stories. Reading about calls coming from inside the house, creepy clown statues that turn out to be murderers, or the cell phone of a man making calls after his death (which is apparently true, and just gave me chills) is truly an awesome way to get into that holiday spirit. After all, how often are we allowed to revel in the terrifying without being considered weird or morbid? Not often.

Sure, it's super-easy to just read the Horrors section of Snopes.com, or a whole mess of creepy novels, but for those who want a bit of international flair thrown in with their spooky, I've compiled a list of 10 scary folktales from around the world. Join me in feudal Japan, by a river in Mexico City, on a train in Stockholm, and several more locations while I spin a creepy yarn for you.

Are you afraid of these ghosts?

Coming at you from Mexico is the tale of La Llorona, or translated "the weeping woman". Legend has it that La Llorona began as a beautiful woman named Maria who drowned her children in a river because her husband left her for various reasons, usually involving boredom or a younger woman. Suddenly full of remorse over what she had done, she threw herself in river as well. Unfortunately for Maria, it turns out that drowning your children in rivers does not give you a ticket into heaven. Cursed to wander riverbanks for eternity, La Llorona weeps as she walks, kidnapping children and drowning them in the misguided hope that her children will forgive her. Often used as a sort of boogeyman to scare young children, it's been said that those who hear her cry are fated for death.

Silverpilen, The Ghost Train of Stockholm

Not a specific story, but more of a recurring character in many Swedish urban legends, the Silverpilen was a strange train — silver instead of the normal green trains — not often seen by residents of Stockholm. Starting in the 1980s, rumors began to spread that the Silverpilen was a ghost train. Legend has it that if a passenger is picked up by the wayward train they would disappear forever, or resurface weeks or even years later with no memory of where they had been. It's said that the cars are either empty, or full of ghosts, and occasionally it's connected with an abandoned train station called Kymling, leading to the phrase "Bara de döda stiger av i Kymling" or "Only the dead get off at Kymlinge." Try not to think about that the next time you're in New York City and waiting for the subway!

Botan Dōrō, or The Peony Lantern

Half-love story, half-ghost story, and wholly terrifying, the story of the Peony Lantern began in 17th century Japan. Although many versions exist, they all follow the same general premise: on the night of Obon (a Japanese festival that honors the spirits of one's ancestors), a widowed samurai named Ogiwara meets a beautiful woman named Otsuyu, always accompanied by a young girl holding a peony lantern. The lovers meet in secret from dusk until dawn, and one day an old woman who has lived by Ogiwara for many years grows suspicious. Spying on the two of them, the old woman is horrified to discover Ogiwara in a loving embrace with a skeleton. Needless to say, he's a bit horrified to discover this as well, but his love for Otsuyu is too great, and the story ends with his dead body wrapped in her skeleton. This story has endured for centuries, having been a kabuki play, the subject of several paintings, as well as several films.

Stalking the Mid-to-Pacific Northwest is the Deer Woman, a creature that features in the mythology of several Native American tribes, most notably the Chippewa. Her form alternates between that of an old woman or a a deer, but she mostly favors the form of a young and beautiful maiden with the feet and legs of a deer. The Deer Woman often enjoys standing just off the hunting trail, hoping to lure young men over to her so that she can trap them with her magic before it's too late. She is also fond of dancing, known to enter dancing circles to dance the night away, occasionally using her beauty and dancing ability to lure young men out into the forest. According to the Chippewa, she can be chased away with a chant, tobacco, or by simply noticing that her feet aren't human.

Another ancient Japanese tale, the story of Kuchisake-Onna was revived in the 1970s, becoming incredibly popular and prevalent. The tale is a simple one: You're walking alone on the street and run into a woman wearing a surgical mask, which is a popular enough thing to see when it's cold season in Asia. The woman will ask you "Am I pretty?" If you say no, she will murder you with a pair of scissors that she carries. If yes, she will remove her mask to reveal that her mouth has been slit from ear to ear, à la Heath Ledger's Joker... and then will Jokerize you as well. Although that idea of random ghost murder is terrifying, in 2007 a coroner found records from the 1970s of a woman who chased children, a woman with her mouth slit from ear to ear.

The Human-Eating Tree of Madagascar

The idea of a human-eating tree may seems too crazy to be true, but back in 1874, knowledge of this mystical plant was all the rage thanks to German explorer Carl Liche. In the South Australian Register, Liche had this to say about his experience with the "Mkodo tribe" of Madagascar:

From the top of the tree sprout long hairy green tendrils and a set of tentacles, constantly and vigorously in motion, with ... a subtle, sinuous, silent throbbing against the air. [Presented a woman as offering], the slender delicate palpi, with the fury of starved serpents, quivered a moment over her head, then as if instinct with demoniac intelligence fastened upon her in sudden coils round and round her neck and arms; then while her awful screams and yet more awful laughter rose wildly to be instantly strangled down again into a gurgling moan, the tendrils one after another, like great green serpents, with brutal energy and infernal rapidity, rose, retracted themselves, and wrapped her about in fold after fold, ever tightening with cruel swiftness and savage tenacity of anacondas fastening upon their prey.

Although carnivorous plants do exist, the Human-Eating Tree of Madagascar, Carl Liche, and the Mkodo Tribe do not, thankfully. However, the concept of Human-Eating trees and other plants still frighten us today, as well it should.

Back in the day, being a sailor was a lot more than knowing which direction port and starboard is, or getting really cool mermaid tattoos. In fact, most sailors (and by this I mean most sailors of British and American persuasion) developed a rich folklore all of their own. There are the usual superstitions: adopting a black cat would bring the ship some luck, touching a sailor's collar would also bring good fortune, but whistling and carrying a banana on board would bring nothing but bad luck to everyone. One of the most well known folktales of the high seas belongs to the story of Davy Jones. Far from being the cute lead singer of The Monkees, Davy Jones was largely considered to be the devil to most sailors, with the idea of being sent to Davy Jones' Locker (another word for a chest or trunk) being a rather ominous euphemism for drowning. While the origin of this deep sea devil is currently unknown, one of his earliest descriptions comes from The Adventures of Peregrine Pickle, originally published by Tobias Smollett in 1751:

This same Davy Jones, according to sailors, is the fiend that presides over all the evil spirits of the deep, and is often seen in various shapes, perching among the rigging on the eve of hurricanes:, ship-wrecks, and other disasters to which sea-faring life is exposed, warning the devoted wretch of death and woe.

Coming from Native Hawaiian tradition are the Nightmarchers, or huaka'i pō , which means "Spirit Ranks," ghosts of ancient Hawaiian warriors who rise from their grave on certain sacred nights to march out to re-enact old battles once more. Often marching right after sunset or right before dawn, they are known to kill whomever witnesses the march, although there are ways around this. If one of your ancestors are among the ranks you can be spared, but if that is not the case you can also avert your eyes, or in some parts lay face down on the ground to show respect. To respect them will lead to great things, but if you don't it almost always leads to death.

There are many categories of ghosts in Bengali culture, from the Petni (the ghosts of women who have died unmarried) to the Nishi (ghosts who lure victims into danger by calling to them in the voice of a loved one), but the Skondhokatas are a relatively modern invention. These ghosts are exclusively victims of decapitation by train. They often plead the living that stumble upon them for help to find their lost heads, and have been known to enslave those who aren't willing to help, or even turn to violence. Thanks to their lack of brain power (they don't have brains, after all) they are relatively easy to outsmart.

El Chupacabra, or The Goat-sucker

First sighted in Puerto Rico, the Chupacabra (literally translated to mean "The Goat-sucker") is a monster whose description varies, but is often thought to be roughly the size of a small bear. Originally reported in 1995 after a series of mysterious animal killings that drained all the blood from the poor creatures, there have been reported sightings all over North American, from as far north is Maine to as far south as Chile. Still staunchly believed in today, there seems to be no limit to where the creature can travel, and its love of sucking blood through tiny circular incisions is chilling to say the least. The next time you're walking alone at night in North America... beware!