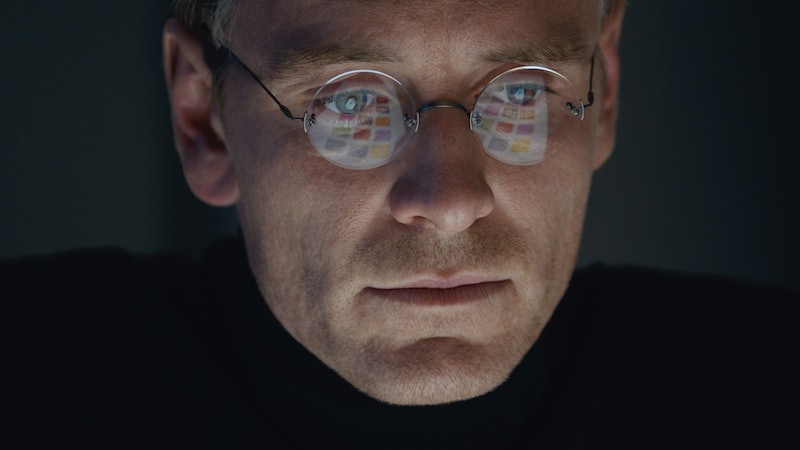 In Steve Jobs, the new biopic about the Apple co-founder from director Danny Boyle and screenwriter Aaron Sorkin, the tumultuous rise of one of the most iconic names in the world of technology is told largely through three of his iconic product launches, with Michael Fassbender embodying the late tech genius doing what he did best. And although most people largely think of the icon's various successes like the iPod, iPhone, and iPad, the film doesn't skip over his failures, either. Specifically, the movie gives a lot of attention to Jobs' "black cube" computer, the less successful venture he pursued after being forced out of Apple (yes, believe it or not, Steve Jobs was not welcome at Apple for a time).

If you don't remember much about the computer, you're probably not alone. The black cube refers to the NeXT Computer, a machine built in 1988 by Jobs's company of the same name that he founded in 1985 after leaving Apple. Nicknamed "The Cube" by the press, the computer consisted of a black, die-cast magnesium, one-foot cube, which was a big departure in aesthetics from computers of the day. It's safe to say that Jobs was fond of the nickname, since the model's successor in 1990 was officially called the NeXTcube. But what's the story behind the original Cube?

Unlike Apple and its Macintosh computer, NeXT wasn't focused on making personal computers for everyday consumers. Instead, the company was out to make the most-powerful computers available for educational and business purposes. It spent three years developing the Cube, which consisted of revolutionary hardware. It skipped the standard floppy disk in favor of a magneto optical disk and featured ethernet and built-in email capabilities long before they were industry standard. The Cube also came with a 17" monitor and its own laser printer. The Cube was unlike anything else on the market, but it came at a steep price, selling for $6,500 in 1988, which translates to $12,962 in today's dollars.

The Cube was unveiled at a flashy gala in New York City in 1988, where Jobs showboated in a way that would become very familiar to fans in the ensuing decades. The event was invitation only, and Jobs famously refused to invite a single Apple employee. One stunt at the show involved the Cube participating in a duet with a live violinist, because who doesn't want to see a computer play classical music?

Although the Cube's hardware is what most reviewers focused on at the time, the computer's most groundbreaking aspect was actually its software. The Cube was not a strong seller, and neither were any of NeXT's later computers, so the company eventually switched to making software only; their largest achievement was their true multitasking operating system which debuted in the Cube, NeXTSTEP. This operating system was the reason Apple bought NeXT Computer in 1997, and it served as the basis for Apple's popular OSX and iOS operating systems that are now used by everyone with a Mac or iPhone. NeXTSTEP was also used in several internet breakthroughs over the years; the first web browser was built using NeXTSTEP, as was the first ever app store.

Most people today have forgotten about the Cube, and it's almost impossible to find one for sale, though once in a while one will pop up on eBay for considerably less than their original asking price. But the computer's legacy remains intact every time someone uses an OS built by Apple (I'm typing this article on a Macbook Air right now), so I think we all owe a debt of gratitude to Steve Jobs' noble failure.