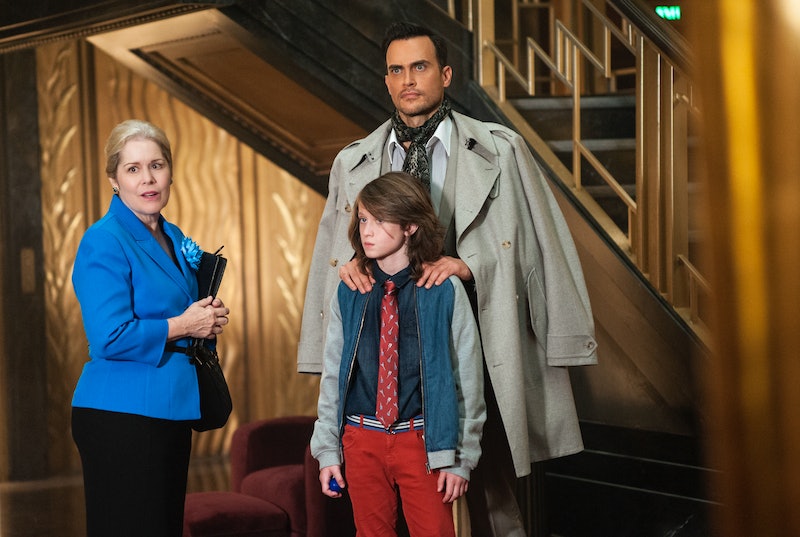 Ever since Ryan Muphy first confirmed that all AHS seasons are connected in some way or another, fans have become obsessed with finding various ways for the different horror worlds to link together. And thanks to a recent interview Murphy had with Entertainment Weekly, we're now one step closing to being able to solve this mysterious puzzle. Because, as it turns out, American Horror Story: Hotel connects directly to Season 1's Murder House . How, you may ask? Well, according to Murphy, (and further proven by the image above), Christine Estabrook will once again portray her Season 1 real estate agent character, Marcy, who had the difficult job of trying to sell Murder House to unsuspecting buyers. (Like the Harmon family, for instance.)

But apparently this establishment isn't the only murder-centric building she's been struggling to get off her hands since she's also in charge of selling the Cortez Hotel. (Seriously, and we all thought our jobs were hard.) However, the exciting news doesn't even stop there. Not only will fans get to see this familiar face again, but we'll also eventually revisit Murder House itself at some point. It's unclear how or why this comes about, but you better believe that I am beyond thrilled about the opportunities this could present. Such as…

Granted, it would be a huge secret to keep under wraps, but could you imagine if Dylan McDermott, Connie Britton, and Taissa Farmiga were able to show up for a scene or two as the ghostly presence of their Harmon counterparts? I would quite possibly die from excitement.

Then again, perhaps we'll get an update on one of the only remaining survivors ever to come out of Murder House — the one and only Constance Langdon. After all, Jessica Lange confirmed that she wouldn't be starring in AHS: Hotel, but maybe she'd be willing to appear in a brief guest-star capacity, especially if it meant revisiting the character that launched her AHS fan base. Please, Murphy, let's make this happen!

If you recall, Season 1 introduced the story of how the infamous murder of The Black Dahlia occurred, with her dentist accidentally overdosing her with nitrous (after sexually assaulting her) inside the walls of Murder House. He, along with the ghost of Charles Montgomery, then proceed to cut her in half, carve a permanent smile on her face, and dump her body far away from the scene of the crime. Obviously, this is all purely fictional, but The Black Dahlia (aka: Elizabeth Short) did actually exist in real life. In fact, the Cecil Hotel in LA is said to be one of the last places she was seen before her murder in 1947.

Perhaps the Cortez will serve as the fictionalized version of the hotel Short was spotted in prior to her death. Maybe there's some bigger connection between these two haunted places than we realize. Plus, I know I'd certainly be up for another Mena Survari cameo, whether it be in flashback form or otherwise. Not to mention the fact that the Cortez seems to also share the uncanny ability of making the dead not necessarily stay that way. Just saying!