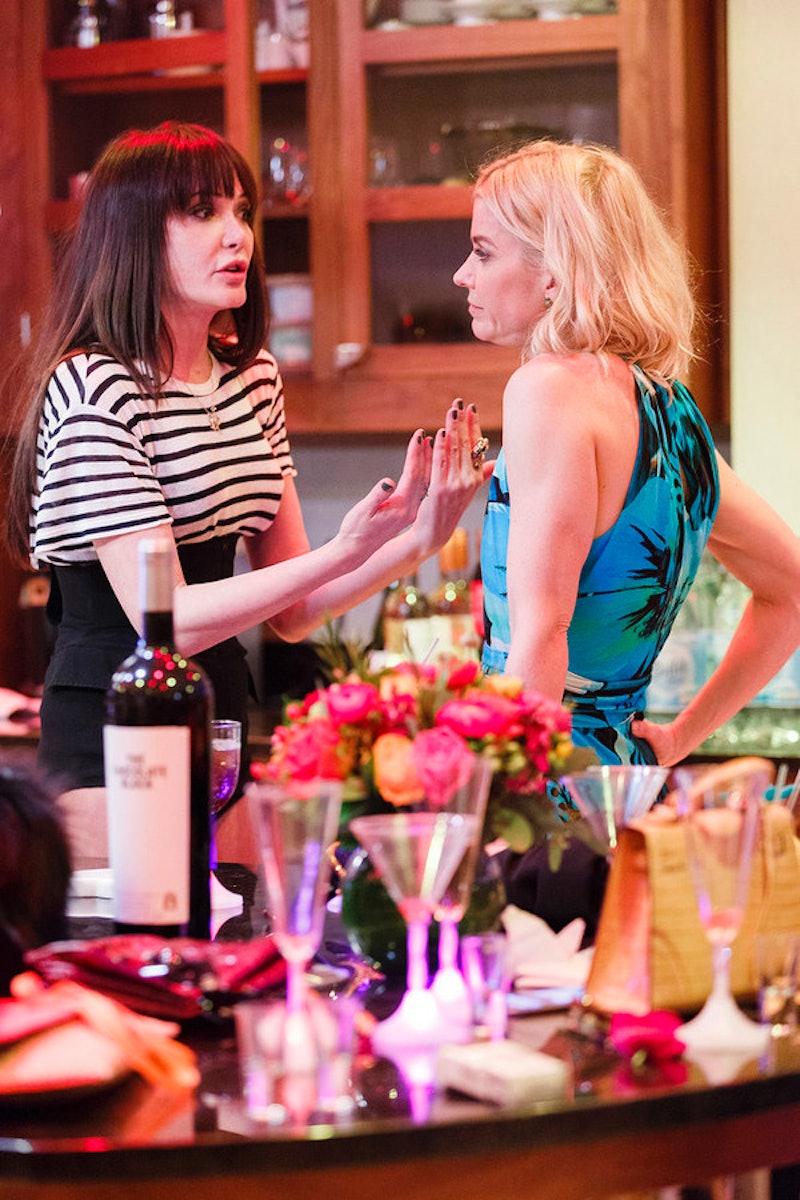 She's the modern day knight in shining armor for ex-pat Julie Montagu, but don't expect Annabelle Neilson, of Ladies of London , to require a parade for doing the right thing. Over the course of the second season, it's been evident that Annabelle's loyalty to friends on the show shines brighter than all of the exquisite jewels the women adorn themselves with. For example, when her longtime friend Julie was hurt by fellow- Brit Caroline Stanbury at a luxe New Year's Eve party, Annabelle ran to comfort her. "I got bullied in school, I got pushed around, and I know what it's like," Annabelle tells Bustle in an interview. "I don't like watching anyone feel like they're being undermined, and if I can stop it to a degree, I will."

"I'm not going to be Julie's bodyguard," Annabelle says. "Julie needs to stand up for herself."

Annabelle was drama-free in the first season of Ladies of London. She comes from a very different circle than most of the other cast members (having been Alexander McQueen's muse and close friends with women like Kate Moss and Naomi Campbell). But that doesn't mean she doesn't have an opinion about the drama on the show. For instance, she has a very strong opinion on the "you can smell a social climber from a mile away" line, which Caroline Stanbury has made famous.

"There are social climbers in almost every walk of life," Annabelle says. "Most people have to start somewhere, and most people climb a ladder. Some people go down those ladders." Annabelle continues to say that it's important that people remember no one is safe from falling down the ladder.

Speaking of the sharp-tongued Caroline Stanbury, Annabelle feels that her comments towards Julie during New Year's Eve were unfair, as she sticks up for the American. "I think that kind of mudslinging is a little unnecessary." Julie, while being married to the future Earl of Sandwich, was also doing a headstand with Caroline Fleming, a Baroness. "She knocked the American lady. If you're going to be knocking, knock them both." A point well-raised. "Don't pick on the American girl who is becoming a Lady, and also feels bloody insecure."

The fan reception for Annabelle this season has been "amazing" she says. "The people that have written to me, or left me messages, have been so sweet." Whether it is notes for her new children's book series The Me Me Me's, or just her loyalty to friends in general, Annabelle is appreciative that fans have been "so supportive."

As for her future with the other women on the show? "They've all surprised me," Annabelle says. "I always say it takes five years before I really believe that I know a person well enough to say that this person is going to be in my life for the rest of my life," she says. Once she takes those five years (and the person is still around), that person will be in her life forever. As for which of the women will make the cut, well, we'll have to watch to find out.