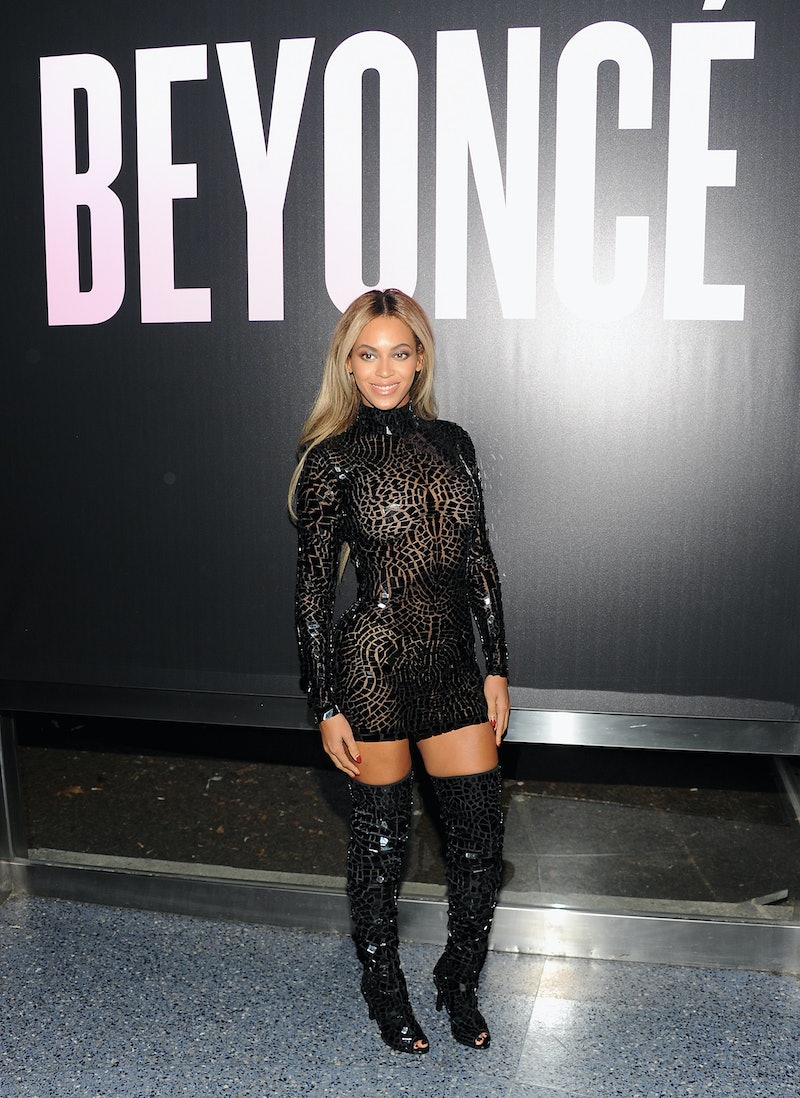 I don't need to remind you (an avid consumer of online journalism, I presume) that only a few short weeks ago, Beyonce broke the Internet. Let's get past the fact that she managed to keep her high-concept visual album a secret from the blogosphere. Let's get past the fact that hundreds if not thousands of people were involved in the making of this unbelievable album, and that the sheer amount of power required to keep that many people from telling their mothers, fathers, hairdressers, or veterinarians what they were doing is unfathomable. We're past all that? Great.

So Beyonce broke the Internet and then, because the Internet is like cockroaches and orthodontia and other things that will still exist when the sun explodes, the Internet bounced back. Every website, online magazine, and blog was filled with questions of whether Beyonce is or is not the few face of feminism, whether white feminists do or do not subjugate black women through their critiques of Beyonce, whether Beyonce is a representation of anything real (not to mention feminist in tone), whether Beyonce does or does not represent women and/or feminists of color well, and whether or not she is being used by media executives to portray a particular brand of feminism signed, sealed, and approved by the patriarchy....etc.

There were some incredibly important things said: things that I think should and will shape future conversations about gender roles and feminism and how white women and women of color relate to themselves and each other within feminist discourse. At Salon, Brittney Cooper wrote about the complex relationship African American women have with Beyonce's feminism, saying,

"How do we make space for black women’s awe and admiration and jealousy and desire and fear? How do we acknowledge that we have spent so much time debating whether she [Beyonce] gets to be a feminist because the power to say who is in and who is out is in fact power? And in a world where it seems black women rarely can have it all, determining who gets to do and to have, matters."

Mia McKenzie, creator of Black Girl Dangerous, wrote about the importance of solidarity within the feminist movement for women of color (to combat a white feminist movement that has often been exclusive), and about the even greater importance of being able to both defend Beyonce and her "feminist album" where appropriate while simultaneously viewing aspects of it with a critical lens.

Dawn Laguens, Executive VP of Planned Parenthood, wrote for The Huffington Post about the ways that Beyonce's album (and, more importantly, the commentary surrounding it) remind white feminists to check their privilege. Further, she said,

"...Feminists must recognize that the power we seek for every woman -- the power to make your own decisions -- does not come with strings attached. Women don't owe feminists anything. And it does us no good to fight so hard for a woman's right to make her own choices if we then turn around and tell her she's made the wrong ones."

What this all boils down to is that there has been an awful lot of conversation over what Beyonce is and what she isn't and a ton of discourse surrounding what a feminist is and isn't. And that's incredible, and incredibly important. But at some point in all of that conversation and all of that discourse we (feminists, women, Millennials) have forgotten something crucial.

Queen Bey is just one woman. Yes, she stands on a pulpit higher than most of us could ever comprehend. Yes, she speaks into a megaphone that is louder than most of us will ever experience. Yes, she is the reigning Queen of popular culture in America. But she is only one person, one woman, one wife, one mother, and one feminist. Her feminism may not be mine. It's probably not yours. It's definitely complex. But it is hers. She owns it.

She can release a tour de force of a visual album that samples both a pro-woman, very feminist TEDtalk and a clip of her husband rapping about Ike Turner. She can use her husband's last name to name her tour and still relish in her own ability to temporarily cripple social media. She can practice her brand of feminism and articulate how she feels about being a woman in any way she wants. The point of the feminist movement is to allow women to make their own choices. This is her choice. And we can accept that she is merely one (awesomely beautiful, fabulous, wealthy, and powerful) woman singing about being a woman, a feminist, and a human being. There is no such thing as "perfect" feminism. There will be always be ways to improve, ways to discuss and correct injustice and inequality. That strive for perfection is what leads to incredible critiques of popular culture. Those critiques are crucial. But in all of that critical thinking we can't lose sight of the fact that we are all entitled to an opinion, a point of view, or a concept album. We need to let every feminist and every woman have the space to make their own choices, to use the words and employ the actions that they choose. We need to cut Beyonce, each other, and ourselves a little bit of slack.