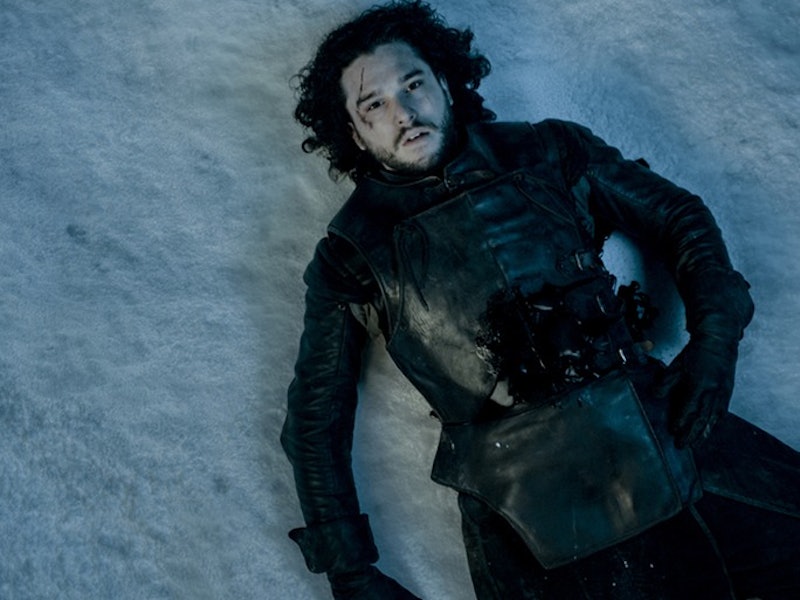 Halloween is upon us, which means costume ideas are frantically floating around the Internet. Thus, those of you who are die-hard Game Of Thrones fans may be starting to wonder just how to put together a zombie Jon Snow Halloween costume. After all, if you happen to be a Thrones fan, then you'll likely still be buzzing from the cliffhanger that was the Season 5 finale in which (spoiler alert!) Jon Snow dies (although... maybe isn't dead?) in the snow — slayed and betrayed by his fellow brethren of the Night's Watch. With all the fan-talk about how Jon Snow may return to life in Season 6 as a zombie (having been resurrected by Melisandre, of course), it's no surprise that this Halloween, fans might want to personify their favorite zombie Watcher On The Wall.

As an intense Game of Thrones fan myself, it didn't take me long to look at my boyfriend, Phil, this year and make the important decision for him: "You're going as Jon Snow this year," I said with triumph. "You already have the hair for it." Because Halloween is my thing, he was more than happy to comply with my wishes (last year I went as Daenerys, and I made him go as Khal Drogo). So if you're also wanting to go as the famous Stark bastard of the North, let's take a look at how to dress as a zombie Jon Snow for Halloween.

As far as recognition goes, Jon Snow is well-known for his head of thick, curly dark hair. "He's never met a girl he likes better than his own hair," after all. Thus, when dressing up as Jon Snow, getting the locks right is paramount.

If you happen to be naturally rocking long, dark strands, then you're already good to go on the hair front. If you don't have the dark, Stark-like locks, however, you can easily find a curly wig to do the job. Just make sure the length of it falls somewhere under the chin/above the shoulders.

2. Raid Your Closet For Everything Black

As a member of the Night's Watch, Jon Snow has little choice in the way of color in his wardrobe. It's all black, all the time. This actually makes dressing like Jon Snow fairly easy. Simply raid your closet (and/or your partner's closet) for anything black. Black pants, a black belt, and a simple black shirt will do. If you happen to have anything with texture in it (like black faux leather pants), then all the better.

Anything that looks like leather or fur will also do, helping add a little "depth" to the costume. I managed to take some items from both my closet and Phil's to create the perfect Jon Snow outfit: Faux-leather pants, a black belt, a long black tunic, and a plain black cotton T-shirt.

3. Invest In A Furry Black Coat

Aside from his famous coif, Jon Snow is also known for not going anywhere without his black, furry cloak draped around his shoulders, helping shelter him from the northern cold. Most people don't have an item like this just lying around in their closets (unless you're a LARPer, perhaps), so it may have to be something you pick up online or at a costume store. Anything will work, as long as the cloak (or coat or vest) is black (and ideally trimmed with fur, preferably around the shoulders).

Now that you have the outfit all figured out, it's time to add that little "undead" look to the face. If you don't already have some Jon Snow-like facial hair, you can add it onto your face by using some fake hair or with an eyeliner pencil. Phil, luckily, naturally sports similar facial hair to Jon, so my makeup work was minimal.

I added a little powder to lighten his face, outlined his eyes with a bit of purple eyeshadow for the hollowed-eyed "zombie" look, and then drew on some scars with a lip liner pencil. Everyone's take on "zombie" will be different, so you can go really crazy with your unique interpretation. Personally, I prefer the more subtle zombie look, as I want to avoid making Phil look like "white walker Jon Snow" (albeit that would be cool, too).

If the curly, shoulder-length dark hair, the all-black ensemble, and the furry black cape aren't dead giveaways of who you're dressing up as for Halloween, then you may want to add a few accessories to spice up the costume. Being a very proud fantasy nerd myself, I (of course) already had a sword sitting in my bedroom.

When placed through the belt of the costume, it added the perfect finishing touch to Phil's zombie Jon Snow look. If you don't have a sword handy (and don't feel like purchasing one, real or fake) then you can always carry around a little stuffed wolf (preferably white) and go as zombie Jon Snow and Ghost.