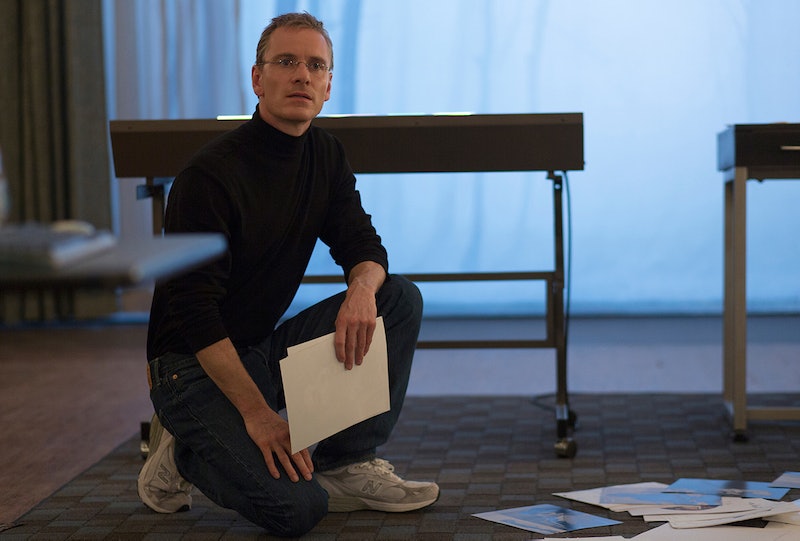 Acting is always transformation on some level, whether the actor in question is spending 12 hours in effects make-up or just putting on a different shirt. In the case of biopics, there’s an additional duty of “getting it right,” which, in my opinion, makes a movie like Steve Jobs (out Oct. 9) pretty damn brave. With Michael Fassbender taking on Jobs himself and Seth Rogen, Kate Winslet, and others portraying his colleagues, the wardrobe and makeup departments on the film had their work cut out for them in recreating Apple’s formative years. Yet photos of the Steve Jobs cast vs. their real-life counterparts shows that despite the difficult challenge, the filmmakers actually might have succeeded.

As far as resemblance is concerned, the filmmakers didn’t go easy on themselves when picking the cast. No one would call Michael Fassbender a Steve Jobs lookalike if their lens prescription were up to date, yet Esquire reported that director Danny Boyle didn’t find the dissimilarity to be a good enough reason not to put him in the role. There’s more to a biopic performance than just a side-by-side comparison, and from the positive early reviews Fassbender is getting for his portrayal of the Apple co-founder, it would seem that his look isn’t of huge concern to the critical community either. But what about his co-stars? Let’s compare the stars of Steve Jobs to the people who they play and see just how successful their transformations are.

Vs. The Real Steve Jobs

Fassbender's jaw is more square than his counterpart's, but all in all, a pretty decent likeness! The lack of resemblance between the two men is more apparent in the early years era of the trailer, pre-silver hair and glasses.

Vs. The Real Steve Wozniak

The glasses and beard aren't doing much to camouflage here. Seth Rogen looks like scruffy Seth Rogen. Jobs' longtime business partner's eyes are a much different shape, so barring some serious plastic surgery, this is as good as it can get.

Vs. The Real Joanna Hoffman

To convince Danny Boyle that she was the only choice to play Apple's marketing guru Joanna Hoffman, Winslet had a three-pronged plan. She described it to Entertainment Weekly: "Got my husband to go to a wig shop. Buy a short-haired dark wig. Stuck it on my head." She sent that picture off, and it got the part. Also the fact that she's Kate friggin' Winslet.

Vs. The Real John Sculley

Unfortunately, the generic business styling of the former Apple CEO left no extravagant trappings for Jeff Daniels to use to get into characters. There's a good baseline similarity though, and since Sculley's appearance is not as iconic as Jobs', the differences aren't distracting.

Vs. The Real Chrisann Brennan

It's amazing what a middle-parted, flower-child wig can do. Waterston is the spitting image of Steve Jobs's high school girlfriend Chrisann Brennan in this photo from her tell-all memoir.

Vs. The Real Andy Hertzfeld

Stulhbarg also had the benefit of a bold accessory for his role as Apple developer Andy Hertzfeld. Those monster glasses cover up so much of his face, I can't tell if they look alike or not.

Valiant efforts all around, but mostly these comparisons make me glad that the 1980s are long over.