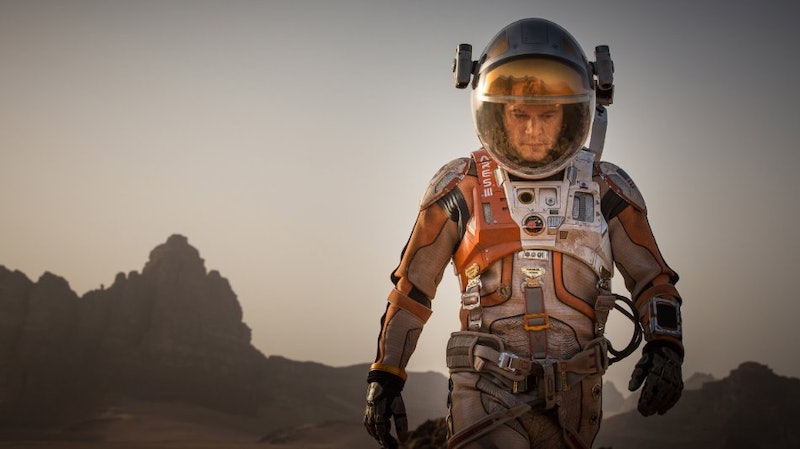 "Tell Commander Lewis," stranded astronaut Mark Watney (Matt Damon) says to a fellow officer from his abandoned post on Mars, "she has terrible taste in music." After a sudden, vicious storm injures Watney and causes his crew to leave him for dead, he finds himself left to his own devices, four years from the closest aid, and forced to find a way to survive in a "hab" — artificial environment bubble — meant to last just shy of a month. His only company during his efforts to plant a crop of potatoes, adapt a short-range rover for much, much longer ranges, and rendezvous with his crew for the return home is his commanding officer Melissa Lewis' (Jessica Chastain) digital library of disco hits. It might seem counter-intuitive that Lewis was the only crew member to have brought a soundtrack for her multiple-years-long journey, but the film's soundtrack is also an ample reminder that at its peak, disco is the best-worst thing to ever have been imposed on human eardrums. So where can you get The Martian soundtrack so you can hear the tunes for yourself?

The soundtrack is officially available for purchase via Amazon, but most of its songs are also available through major streaming services — after all, all of them were chart-toppers in their heyday. Their joke is built into the very premise of the film; it seems like a movie constructed solely to be able to finally play David Bowie's "Starman" in a literally appropriate context. (Using "Life On Mars" might have been an abuse of the conceit.) The nine vintage disco tunes woven into Harry Gregson-Williams's epic, Hans-Zimmer-esque score add levity to an otherwise bleak plot. Perhaps the externally imposed madness of ABBA helps save Watney from the internal madness that could accompany months on end spent without any human contact. The tunes don't seem to grow on him as the film develops, but they act as a tether to the distant but necessary hope that he'll survive until he makes contact. Stream the full odyssey below, and try to imagine what would happen if you were abandoned on a planet with only Donna Summer for company.

Say what you will about disco, but they knew how to craft a hook. The theme from Happy Days originally appeared in the credits for the ’70s television series, though rock group Pratt & McClain released the track as a single that catapulted them to fame.

2. "Turn The Beat Around" By Vicki Sue Robinson

Vicki Sue Robinson's sole chart hit was covered quite faithfully by Gloria Estefan in 1994, but it's the original version that Commander Lewis includes in her selection of disco favorites in The Martian.

4. "Rock The Boat" By The Hues Corporation

Though "Rock the Boat" entered the charts on the back of its success in nightclubs and as a disco favorite, Hues Corporation member St. Clair Lee reported that the song is a whole lot more versatile — "It was a song that you could do anything on. You could cuddle or you could get crazy if you wanted to," he told Classic Bands. "It was a love song without being a love song." Or a song for an astronaut stranded on a desolate planet. The Hues Corporation's original members might not have foreseen that turn of events.

5. "Don't Leave Me This Way" By Thelma Houston

With lyrics that include "Don't leave me this way / I can't survive," the upbeat disco track covered by Thelma Houston is quite well-suited to The Martian. The lyrics may not have initially been construed quite so literally, but Watney makes use of the resources available to him, and that includes Commander Lewis's disco tunes.

Bowie's alter-ego Ziggy Stardust is the singer at his most futuristic, so the song is well-placed in The Martian. All that's missing now is "Space Oddity," and maybe "Life on Mars."

(Spoiler!) Late in the movie, Watney's crew turns back to retrieve him. When they use Earth's gravity as a slingshot to give them the momentum to return to the red planet, The Martian features a montage of the crew giving the news to their loved ones back on land. Commander Lewis's husband, speaking with her via video chat, reveals a vintage ABBA record he nabbed from a flea market. So it's no surprise that "Waterloo" is among the tracks featured in her collection, much to Watney's chagrin.

The Washington Post nailed its description of The Martian's use of "Love Train" by the O'Jays in the final scenes of the film — "Corny?" the paper questioned. Definitely.

9. "I Will Survive" By Gloria Gaynor

Perhaps the only song more predictable — and yet more fitting — than Bowie's "Starman" is Gloria Gaynor's "I Will Survive," with lyrics like "I grew strong / And I learned how to get along / And so you're back from outer space." Disco music seems to have a recurring theme with its fixation on space metaphors.

The Martian's soundtrack draws attention to itself. It's not just music to fill silence. It holds an important role in the plot, in keeping Watney sane and connected to his departed crew. Films like Guardians of the Galaxy have similarly incorporated has-been hits, but none as successfully or as seamlessly as The Martian.