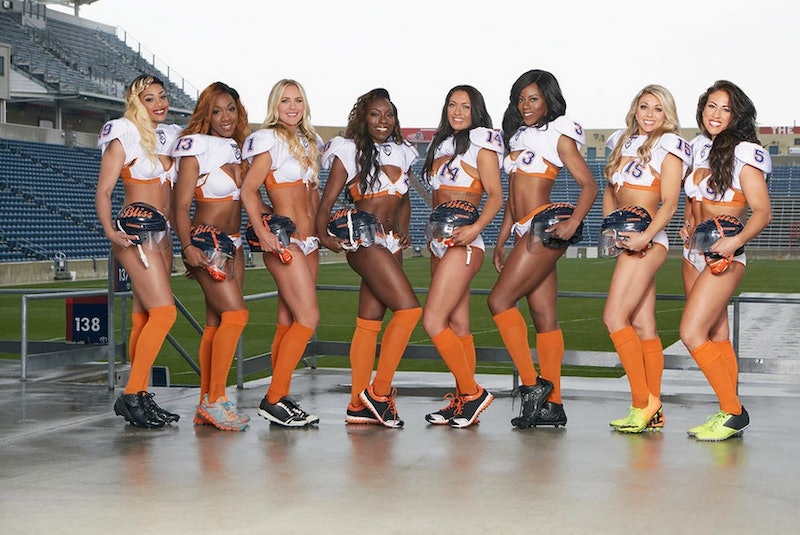 When the Lingerie Football League was founded in 2009, it’s no surprise that it was intended to appeal to men. But, in 2013, the organization rebranded as the Legends Football Legaue. Though the short shorts and bra jerseys have remained, the new image is intended to appeal to both men and women. LFL’s Chicago Bliss team is currently being chronicled in a new docu-sereis, Pretty. Strong. , premiering Tuesday on Oxygen — but what other women’s sports leagues should we have on our radar?

The series will chronicle the lives of Chicago Bliss players both on and off the field. And, because women’s football does not give the stability of a full-time job, the show has a lot of material addressing how these women balance careers, family, and football. Alli Alberts, a Chicago Bliss wide receiver, is a General Dentist and Prosthodontics Resident. Jamie Barwick works in pharmaceutical sales, is a mom, and fights to keep her spot on the starting lineup as Chicago Bliss center. And Yashi Rice leads a dual life as a struggling R&B artist and defensive linemen. Whoa, these are some interesting women.

With the Chicago Bliss players in mind, who are the other unsung heroes of women’s athletics? The show has the ability to inspire us to engage with more women’s sports. Here’s a list of 7 more women’s leagues you should be supporting.

Batter up! Hear that call! The time has come for one and all. To play ball. NPF is the only professional women's softball league in the United States. Support the NPF team in your area: Akron Racers, Chicago Bandits, Dallas Charge, Pennsylvania Rebellion, and the Florida Pride.

Remember when — to quote Amy Poehler — some "badass American b******" kicked butt at the Women's World Cup this summer? You don't need to wait for another championship to see these women play soccer, you can catch them playing for the National Women's Soccer League.

The National Women's Hockey League was founded in 2015. 2015!? Support the nascent franchise and follow the Boston Pride, Buffalo Beauts, Connecticut Whales, and the New York Riveters.