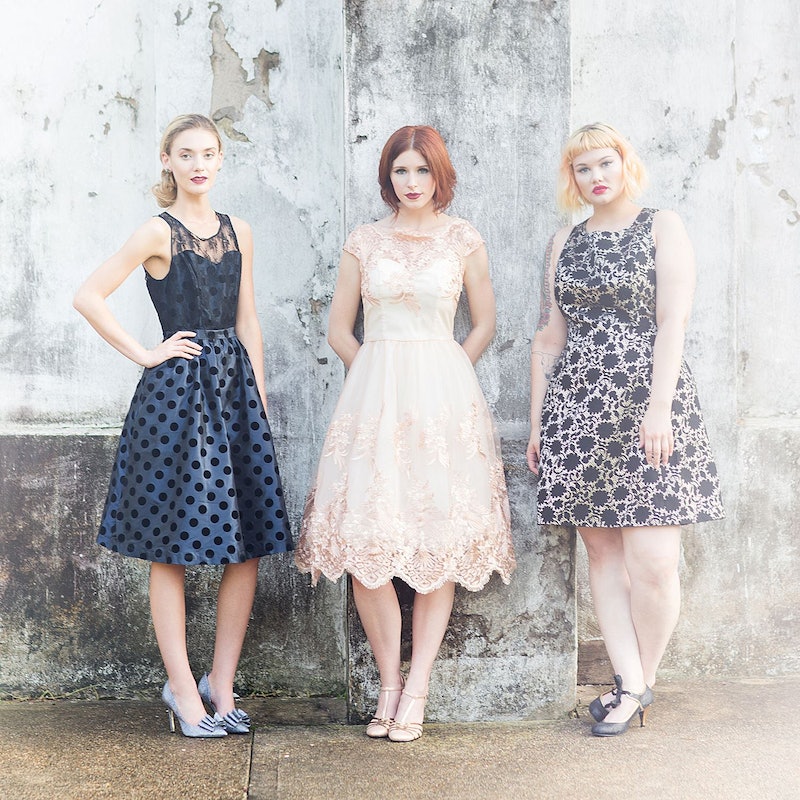 On the morning of Oct. 6, ModCloth announced that it would be retiring its plus size section. Although that sounds like a total step backward at first, what ModCloth is doing is arguably something infinitely more body positive and size inclusive. All of the stocked sizes (XS to 4X) are now sharing the same pages, with the option to click "extended sizes" when refining your results.

The brand's dedication to supporting and listening to its customers has been made obvious thanks to this bold move. According to its press release, ModCloth conducted a survey of women size 16 and above to find out what they really wanted from a clothing company, and are in the process of applying the results to their business.

When interviewed, 84 percent of the women surveyed said that they would buy more clothing if cute and trendy items came in their size, while 79 percent said that the fashion industry ignores the needs of "plus" women. By separating women into plus and straight sizes, the sartorial world is arguably forcing a divide between women that doesn't have to be there.

When it comes to fashion, though, there also exists the implication that plus size women can't wear what thinner ones can, which is a subtle form of body shaming. ModCloth's survey found that over half of the women asked want the label "plus" to be dropped altogether, which is a sentiment that has already been shared by the Drop The Plus campaign throughout 2015.

A ModCloth representative told Bustle via email that the brand's reasoning behind this change is "a growing outcry from the ModCloth community that integration rather than segregation when it comes to shopping for extended sizes is the right thing to do was the company’s motivating factor in taking these first steps towards integration. We were also influenced by the debut of our namesake label, which is available in a full range of sizes, and opening our San Francisco Fit Shop where women from XS-4X can shop side-by-side."

Personally, I agree with the store's decision to focus on inclusivity, rather than a dedicated collection of separate plus size items. As ModCloth's founder Susan Gregg Koger said on ModCloth's blog, “I think there is still an outdated notion in the [fashion] industry that ‘plus’ should be separate because it’s less aspirational, or because that consumer is less fashion-forward, or less willing to spend on herself. But what we’re hearing and seeing from our community is that it is simply not true."

Although the body positive and fat acceptance movements are slowly infiltrating society, Koger perfectly summed up that the media and the worlds of fashion and beauty are largely still implying that there is more of a difference between "straight size" and "plus size" than just the number on a dress. Based off of the independent survey conducted by ModCloth, it seems that this implication is felt by many plus size women who are trying to dress fashionably in an industry that doesn't seem to want them to.

By removing the binary, ModCloth is taking a stand against the fashion industry's perception of plus size women. Hopefully other brands will take this cue and stop designing "flattering" (read: slimming), boring, off-trend clothing specifically for plus sizers and instead include us in their regular designs.