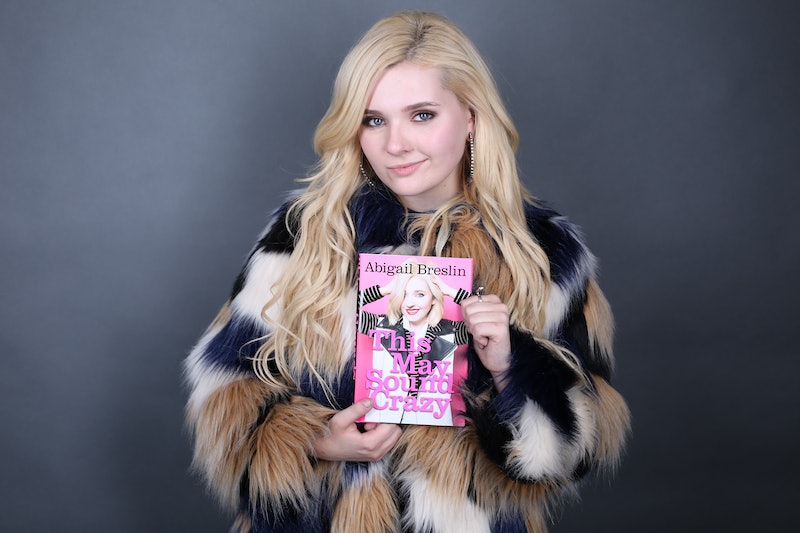 While you may know actress Abigail Breslin from her breakout role in Little Miss Sunshine or her current role as Chanel No. 5 on Fox's Scream Queens, you might not know just how big of a deal she is on Tumblr. And let me tell you, she is a BFD. Breslin has quite the following in the social media platform, with fans hanging on her every word about boys, dating, body image issues, family, and basically anything that matters to a contemporary teenager roving the internet. It makes sense, then, that she's now sharing her advice, it-happened-to-me stories, and even Christmas cookie recipes in her new Tumblr-style book This May Sound Crazy, out Oct. 6.

What is a little more surprising is the fact that the book seems to keep the Tumblr-esque style of writing in every rivet: From the DGAFs to the ~emphatic moments~ and all the feels in a myriad of situations, Breslin's book reads, well, a lot like Tumblr. And while there continues to be some stigma attached to young women who embrace the Internet of it all, the Basic elements of life (Taylor Swift, Pumpkin Spice Lattes, and selfies — especially selfies that young women dare to take at baseball games), Breslin is all for embracing whatever it is that young women enjoy. Even if it means carrying the title of "Basic."

"I mean I don’t really see what the problem is," the author and actress says, sitting in a director's chair in Bustle's video studio. "I remember I dated this guy, and he would say to me all the time, like, 'Uh, don’t be like that girl. Don’t be like that basic girl. Like, uh, you don’t even really like pumpkin spice lattes, or like, uh, do you even like Mean Girls?'"

The simple answer is hell yes, Breslin likes Mean Girls (it's "an American classic and a staple of the world"). And sure, she's tried not to be "that girl," but not only did it not work, but Breslin says she eventually changed her mind on the whole "basic" persona.

"I would like try to suppress it and be like 'Oh yeah, no I’ll just get a black coffee,' and then one day I was like, 'You know what? No. I’m going to get a pumpkin spice latte, because this is who I am. This is my right as a human being of this world, to get a pumpkin spice latte when I damn please,'" she says, hopefully giving hope to PSL-loving souls everywhere. "As long as you’re being who you really are, it’s fine. And I am basic. But, hey why not? Basics aren’t bad." Amen, girl.

Luckily for Breslin, embracing her true self, PSLs and all, was exactly what her publisher wanted when it came time to write This May Sound Crazy. In fact, the way she's comfortable writing for her followers on Tumblr was a very integral part of the entire plan: "My editor was like 'What does IDGAF mean? Like, is this a typo? Or like, 'Why are these random letters just like around everywhere?' And I was just like, 'Just trust me. It will make sense. The youth will get it.' And he was like 'Wow, hurtful.'"

The result, after all that back and forth, is something that Breslin says is pure Abbie. "I mean, I didn’t really filter myself too much. Maybe not the wisest choice. We’ll see," she says. "[In this book] I’m not saying this is what you have to do if you want to get your crush or whatever. I’m just saying this is what I tried, often times failed with, and the upswing of all of that advice. And it’s just advice that I’ve been given."

And whether or not you're comfortable with books that single out ~moments~ with squiggly lines and bolded, oversized text, you can probably appreciate that a young woman who grew up in the public eye is comfortable with being fiercely herself. Basicness and all.