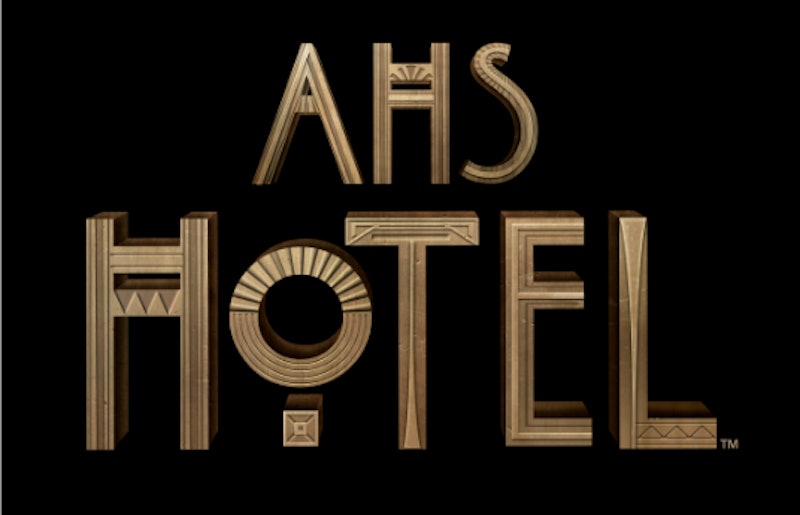 Rubber Man was super creepy; Bloody Face was downright terrifying; and Twisty the Clown is the stuff my personal nightmares are made of. However, these creatures all seem like child's play in comparison to American Horror Story: Hotel 's newest monster, The Addiction Demon. And believe me when I say he delivers the absolute worst form of punishment to his victims — one of which now includes New Girl's Max Greenfield, who you will never be able to look at in the same way again. During the AHS: Hotel premiere, "Checking In," fans witnessed in horror as Greenfield's character, Gabriel, was raped by the demon and his drill-bit-looking dildo. (Which looked all sorts of painful, BTW.) But aside from the horrifying act itself, I'm intrigued/terrified to discover who this Addiction Demon really is.

Is he really just a faceless being who's hellbent on reprimanding drug addicts or could he turn out to be someone we already know? Much like Rubber Man and Bloody Face, I'm betting this Addiction Demon morphs into a very familiar face by season's end. The only question is: who deserves to be put on the suspect list? Considering that everyone on this show seems to be capable of heinous deeds, finding a likely candidate feels just as likely as finding that proverbial needle in a haystack. However, I personally think that this creature is some sort of weird extension of Sarah Paulson's character, Hypodermic Sally.

I know it sounds crazy, but just hear me out for a second. First of all, when Gabriel checked into the hotel, Sally immediately took an interest and called dibs on him. And in no time at all, the Addiction Demon appeared. Second of all, she, herself, is a proclaimed drug addict. And thirdly, she told Gabriel that the pain would all be over as soon as he told her that he loved her. Why would the demon care about that unless it was directly connected to Sally?

And according to TVGuide.com's most recent Mega Buzz, there's much more to Paulson's character than meets the eye. "Because of what Sally did to Donovan in 1994, she'll find herself suffering the consequences for far more than a lifetime," the site teases. "As a result, you'll quickly learn that Sally is much more than what she seems."

Granted, that doesn't explain how Sally was able to be in the room with Gabriel and the demon, especially if she's supposed to be the demon. Which is why I referred to it being an "extension" of herself. Maybe, after she was killed, Sally's ghostly life force was divided into two parts: one that is still just a junkie looking for a fix, and the other that seeks out those with a similar affliction. (Maybe as a form of messed up penance?) Think of it like a Dr. Jekyll/Mr. Hyde-type complex.

I may be way off base here, but considering how closely these two characters appear to be linked, I can't help but think they may somehow be one in the same. Now, if you'll excuse me, I'm off to go consult with my therapist. (And, as usual, AHS — I'll be sure to send you the bill.)