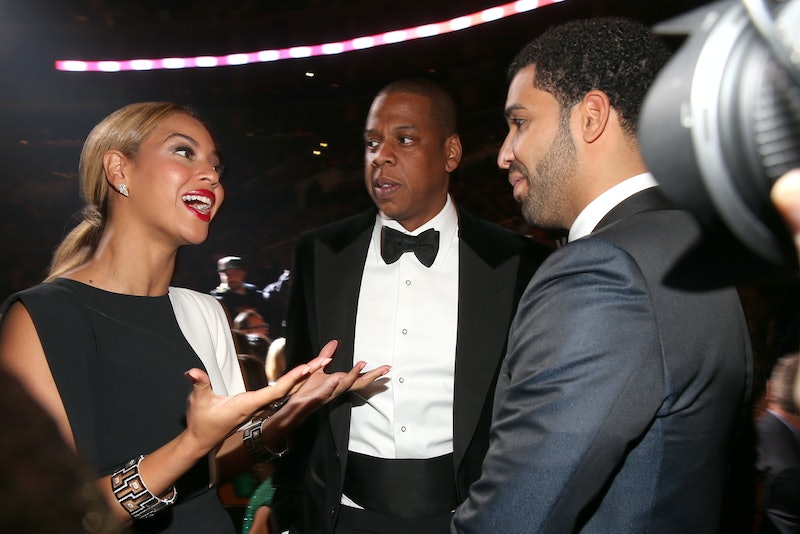 It is always a good day when the Queen Beyoncé releases some new material, even if it's just a small feature. I mean, Drake is good on his own too, but Beyoncé. In May of this year, a version of the track they collaborated on, "Can I," was leaked on the web, and of course, people were fiending to get another taste. The track is meant to be from his Views From The 6 album, and we just finally got a taste of the final product. This is not the first time that the two megastars have collaborated, so I wonder: Are Drake and Beyonce good friends outside of the studio?

I think it's only logical that I would wonder this, because they obviously have an incredible chemistry while working on music. They also frequently run in the same circles in the upper echelon of the music industry, because not many people can touch Jay-Z, Beyoncé, and Drake, to be honest. Throughout the years, they have been photographed greeting each other at awards shows and hanging out at basketball games, so it's safe to say that there is a mutual respect and likely friendship going on between Drake and Bey.

Back in April 2013, Drake first proclaimed his connection with Beyonce when he released "Girls Love Beyoncé," the chorus of which sampled epic Destiny's Child hit "Say My Name." If anything, up until this point, Drake was just a huge Beyoncé fan, just like the rest of us. In an interview with Ryan Seacrest later that year, he spoke about the release of his newest album, Nothing Was The Same, and... Bey. He told Seacrest, “I’m a Beyoncé believer...I really believe strongly in her talent and her position in our generation. I think she’s one of the biggest stars ever, but especially for these girls right now. I feel like they need Beyoncé.”

Drake also told Seacrest that he and Bey were working on music together. He said, “I reached out to her and asked if I could come and be a part of her project and she was kind enough to invite me out there. And we did some work together.” Getting invited to record with Bey seems like something very few people can check off their lists, so he did something right. They have also been pictured having some fun at the 2013 NBA All-Star basketball game, where Drake playfully served Jay-Z and Beyoncé their drinks, courtside.

After Beyoncé's release of her iconic surprise album in December 2013, Drake revealed that his friend and collaborator had apologized for keeping it a secret, which only a friend would do, let's be real. He told Rolling Stone about how he recorded their song, "Mine," and when her assistant came to approve their music video. “They were totally vague about it...I said, 'That's cool,' she closed her laptop real fast, walked off and got on the phone. By the time I came off stage, the album was out. Beyoncé was like, 'I'm so sorry I couldn't tell you!'”

Seems like it's nothing but love between the two, and they know that the music they make together is going to be a win for both of their careers. Drake told Revolt TV of recording with Bey, “I waited so long for that experience, and I only had two days there [to record], so I churned out like three records. I feel like I wish I could’ve sat for a couple of weeks and really got it in, but next time. I love working with Bey, she’s incredible. Whenever she’s ready to work, I’m ready to work.”

Alright, they're friendly enough, so it's time for them to get to work on more surefire hits together. Please?