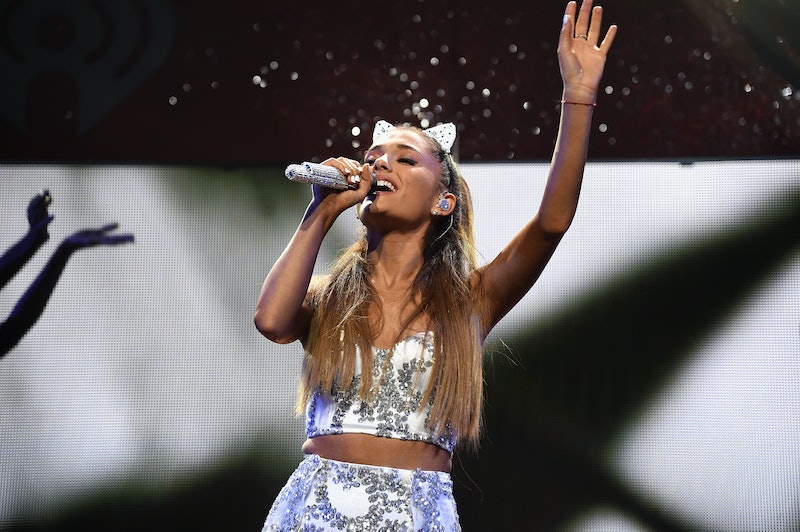 In just 24 days, my favorite Nickelodeon star-turned-macabre, donut-licking pop music powerhouse will drop the first single off of her to-be-released third album, Moonlight. As if she could sense just how badly we Arianators are dying to put the song in our ears, Ariana Grande posted a snippet of “Focus” on Instagram on Tuesday. My body is ready to hear the track in its entirety. The brief clip is a dash of “Problem,” a sprinkle of Christina Aguilera circa Back to Basics, and a hearty helping of Ari G.'s flawlessness. Love it love it love it.

If the clip doesn't have you fired up for "Focus," 1) get your ears checked, and 2) the track's personnel should make you change your tune (corny pun intended ¯\_(ツ)_/¯ ). The song was written by Grande, Savan Kotecha, Peter Svensson, and Iyla. Um, would you take a look at group of songwriters? Not only is Grande everything, but Kotecha, Svensson, and Iyla just so happen to be some of today’s best pop music minds. If you want a hook that cannot be denied, you can count on these maestros.

"Focus" will be a banger. It will take over the radio airwaves. There's no fighting it. The pop music Force is too strong with this one.

More like this
What Is Ariana Grande's Net Worth? When It Comes To Money, She Has No “Problem”
By Hugh McIntyre
Kanye Joked About His Divorce To Kim K In A Surprise Speech At The BET Awards
By Alyssa Lapid
Lily Allen Was “Quite Emosh” After Performing Sober At Glastonbury Festival
By Stephanie Topacio Long
Olivia Rodrigo’s Song Dedication To 5 SCOTUS Justices Sent A Strong Message
By Grace Wehniainen
Get Even More From Bustle — Sign Up For The Newsletter