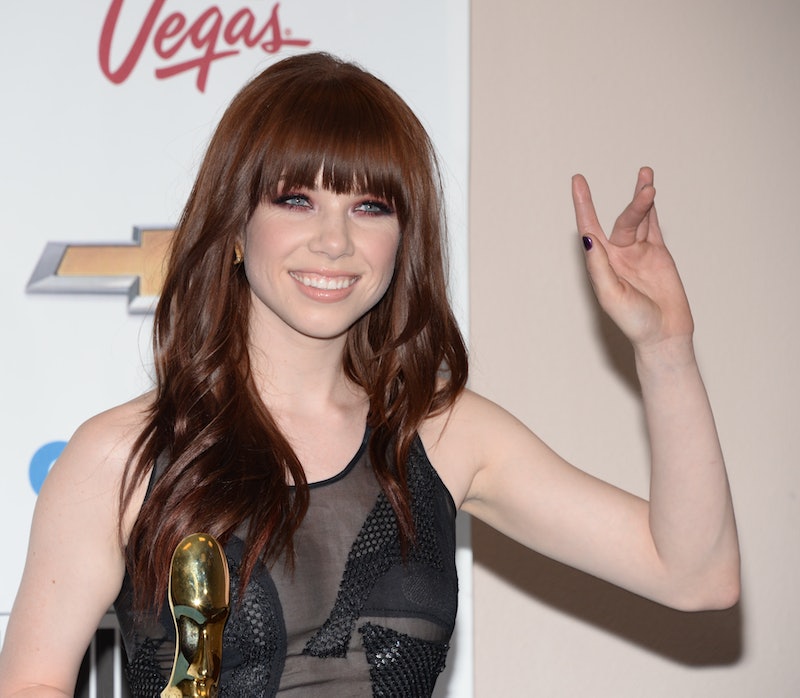 She's been away for a while, but she's about to make a big comeback: According to her manager, Carly Rae Jepsen's new single, "I Really Like You," will premiere sometime in March. With the release of her new music just around the corner, I've found myself wondering lately: Will Jepsen's new album be able to top Kiss, her amazing (but criminally underrated) sophomore LP? Or will it fizzle out and only further cement her reputation as a "one-hit wonder"? Of course, it's too early to say for certain, but based on what we know about the 29-year-old "Call Me Maybe" singer's upcoming project so far, I think there's a lot to be excited about.

So, what can fans expect to hear from Jepsen's new effort? What producers and songwriters did she work with? Basically, should you be looking forward to this thing or nah? I've got answers to all of those questions and more! Something tells me that by the time you’re done reading, you’ll be chompin’ at the bit to hear new music from Jepsen (and honestly, that's the way it should be).

Here are 8 reasons you should totally be excited about Carly Rae Jepsen's new album:

Jack Antonoff Is On Board

Jack Antonoff is a super talented songwriter and producer. (You've probably seen him on the red carpet with his girlfriend, Girls star Lena Dunham.) The 30-year-old lead guitarist of fun. recently assisted Taylor Swift in her successful musical transition from country to '80s-tinged pop (a sub-genre that just happens to suit Jepsen quite well), so I'm pretty psyched about his participation in the recording process.

Jepsen told MTV in Feb. 2014 that she recruited '80s pop icon Cyndi Lauper to work on her new album when the two met in Tokyo at a music festival. Jepsen and Lauper making music together? That sounds like a match made in heaven to me!

Jepsen gushed about her "amazing" studio session with singer-songwriter Sia and pop producer Greg Kurstin (two of the people behind Sia's smash hit "Chandelier") well over a year ago, but I have yet to fully recover. I'm just too amped about this news. I can't help it!

Tegan and Sara Are Involved

Have you heard Tegan and Sara's 2013 album Heartthrob? No? Well, what're you waiting for?! It's a lot different than their previous work, but it's wonderful. Tegan and Sara know how to write a catchy pop tune, that's for sure. (Just listen to "Closer" if you don't believe me.)

"Call Me Maybe 2.0" Is Definitely Happening

In June 2013, Billboard reported that Jepsen was working with one of her "Call Me Maybe" collaborators, Josh Ramsay, on the follow-up to Kiss. We're not worthy.

Billboard also reported in June 2013 that Jepsen was set to team up with pop super-producer Benny Blanco on her new album. At just 26 years old, Blanco has more hits to his name than most artists can hope to land in their entire careers (Rihanna's "Diamonds," Katy Perry's "Teenage Dream," Kesha's "TiK ToK," Maroon 5's "Maps," etc.). I hope his stuff makes the final cut.

According to songwriter Savan Kotecha (Ariana Grande, Britney Spears), "I Really Like You" was co-created by Peter Svensson, a member of Swedish band The Cardigans. Remember "Lovefool"? That song's a classic! This can only be a good thing.

Wolf Cousins is a group of songwriters and producers that was recently assembled by pop music legends Max Martin and Shellback (Swift's 1989). Again, this can only be a good thing.