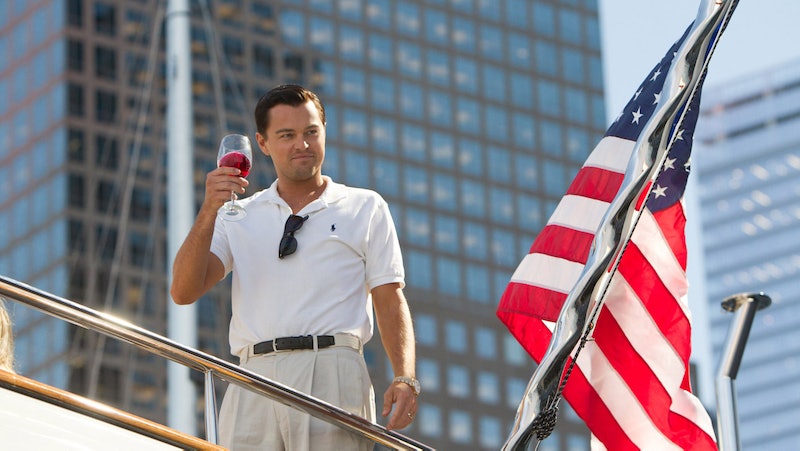 As anyone who has seen The Wolf of Wall Street knows, it's not exactly a subtle movie. From its so-crazy-it's-real story to its excess of female nudity to its nearly three hour length, Martin Scorsese's newest film is totally, unabashedly in-your-face, and that includes the performance of its star, Leonardo DiCaprio. As Jordan Belfort, a corrupt stockbroker whose illegal practices make him millions, DiCaprio is loud, exuberant, and hugely compelling. His performance is the heart of the movie, and a powerful reminder that DiCaprio is one of the biggest superstars in Hollywood.

And yet it won't win him an Oscar. It probably won't even get him nominated. Unfortunately for DiCaprio, his performance in Wall Street, while undoubtedly great, likely won't make the cut with most Academy Awards' voters. Instead, in the year's most crowded Oscar race, voters will choose to honor other contenders, like 12 Years a Slave's Chiwetel Ejiofor or Nebraska's Bruce Dern, and leave DiCaprio to fall by the wayside. You can't feel too bad for the actor, for reasons we'll outline below, but still, another snub has got to hurt. Five reasons why Oscar will elude DiCaprio, and not for the first time:

1. The Best Actor Race is Just Too Crowded

If DiCaprio doesn't get a nomination for Wall Street, it won't be because he didn't deserve one. He gave an impressive, awards-worthy performance, but unfortunately, so did a lot of other guys in 2013. The Best Actor competition is the most crowded race the Oscars will see this year, with at least nine deserving men vying for just five spots. Ejiofor, Dern, and All is Lost's Robert Redford are definites, and Captain Phillips' Tom Hanks and Dallas Buyers Club's Matthew McConaughey are extremely likely possibilities. That leaves Christian Bale (American Hustle), Michael B. Jordan (Fruitvale Station), Forest Whitaker (The Butler), and, of course, DiCaprio, on the outside. And that's not even mentioning Mandela's Idris Elba or Her's Joaquin Phoenix. With all these quality contenders, it's doubtful that DiCapri will make the cut.

2. His Performance Was Too Loud

As good as DiCaprio was in Wall Street, though, his performance might just be too loud for most Oscar voters. The vast majority of the people choosing who gets Academy Awards nominations are men over the age of 60, and it's likely that a good portion of them will find Wall Street, with its heavy emphasis on the showy and wild, more irritating than entertaining. Voters could choose to take out their annoyance with the film on DiCaprio, and instead honor actors whose performances were a bit quieter, like Phoenix or Whitaker.

3. He Won't Have Kate Winslet By His Side

One of the greatest love stories of all time is the one shared between Kate Winslet and Leonardo DiCaprio, and we don't just mean that little movie they were in together back in the '90s. The actors' (sadly) platonic friendship is one of the best in Hollywood, thanks their famous history, their support for one another, and that time when DiCaprio walked Winslet down the aisle. When Winslet won a long-awaited Golden Globe for Revolutionary Road in 2009, she thanked DiCaprio before she even thanked her husband, because the two actors are clearly each other's good luck charms. Unfortunately for DiCaprio, Winslet just had a baby and is unlikely to be at this year's Oscars, or even be around to give her friend some pre-nominations support. In our highly scientific opinion, the lack of DiCaprio's best friend by his side this year does not bode well for the actor's chance of earning a nomination.

For most actors that have racked up Oscar nominations but no wins, the Academy usually decides to just start giving them more nominations, if not an actual win, out of pity after awhile. DiCaprio's been nominated just three times (Winslet had five nods before she won, to put it in perspective), but according to the Internet, he's one of the most snubbed actors in Hollywood. "Poor Leo," says Tumblr. "Will he ever win an Oscar?" And yet in actuality, DiCaprio is perhaps the least pitiable guy in the industry. He's a filthy rich, good looking, highly respected actor who owns, like, three yacht and has a Victoria's Secret model girlfriend. He's the rare superstar who manages to keep his personal life mostly private, has a close relationship with one of the best directors of all time (Scorsese), and at 39, could still pass for 25. If he doesn't get another Oscar nomination, it's safe to assume DiCaprio won't be any worse for wear, something the Academy might choose to note.

5. He Just Has Really Bad Luck

Over the course of his career, DiCaprio has had an impressive amount of awards-worthy roles, appearing in some of the most acclaimed movies of the last few decades. Unfortunately, the actor has the very bad luck of giving his best performances in years when he's bound to get overlooked. Some examples: 1993 — nominated for What's Eating Gilbert Grape, lost to Tommy Lee Jones for The Fugitive; 2004 — nominated for The Aviator, lost to Jamie Foxx for Ray; 2008— snubbed for Revolutionary Road in favor of Sean Penn for Milk and Mickey Rourke for The Wrestler. In 2006, he even snubbed himself; his less-deserved nomination for Blood Diamond canceled out what should've been a much-deserved nomination for The Departed. And this year, he's bound to get overlooked in favor of all the actors mentioned earlier. For all his strengths, DiCaprio has a bad habit of picking the wrong years to give great performances. Maybe 2015 will be his time to shine; until then, he'll have to make do with his Golden Globe nomination and his millions and his yachts... yeah, nomination or not, we have a feeling DiCaprio will be just fine.