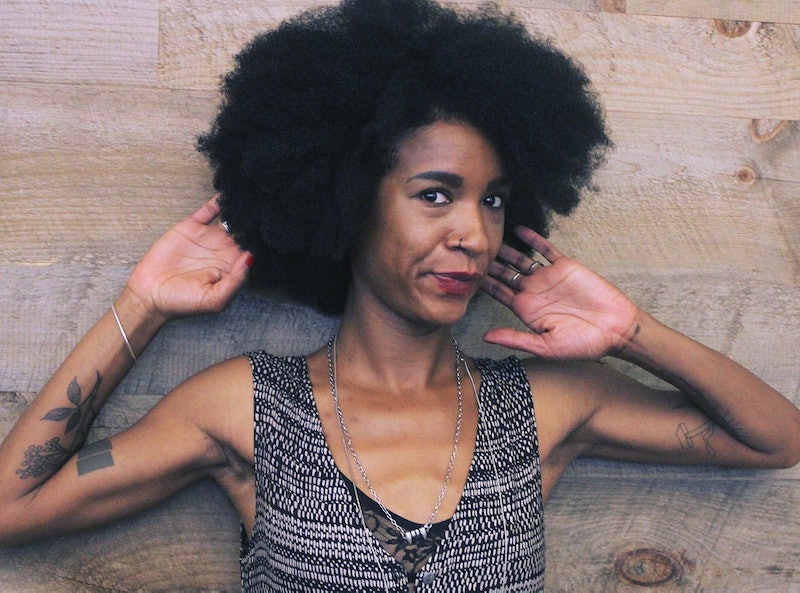 Witch hazel should be about as essential in any medicine cabinet as toothpaste. If you've had the same bottle of witch hazel for months without much use for it, I'd like to recommend trying witch hazel as a face wash. When I first lived on my own, I thought back to my own medicine cabinet stocked lovingly by my mother. Witch hazel, hydrogen peroxide, rubbing alcohol, expired bottle of Tums, and toothpaste. It took about 10 years of living solo to realize that witch hazel wasn't just there for good looks: This is one of nature's original toners that has been used for beauty ailments longer than most store bought products we see on the shelves.

I had never even considered using witch hazel as a cleanser due to its drying properties and lack of vitamins. My own five-ingredient daily wash is messy and incredibly inconvenient to travel with since it needs to be refrigerated — and not everyone wants their bathroom sink caked with bananas and eggs. With this in mind (and after some friends dared me to use it as a cleanser for a week) I decided to try it out for myself. A five day challenge of just using witch hazel seemed like a great idea. After all, my face didn't have any upcoming obligations... what was the worst that could happen?

The challenge couldn't have come at a better time: I had just gotten my eyebrow tattoos touched up and couldn't risk wetting my new ink. Last time, I washed my face with plastic wrap on my eyebrows to ensure their safety and I was more than happy to ditch that annoying task for witch hazel. I figured any upcoming dryness could be worked out in my moisturizer.

2. The First Day Of Witch Hazel

I used witch hazel to cleanse my face and remove my eye makeup for the day. The stinging feeling I felt in my eyes was similar to the sensation you get when you forget you just cut jalapeños and proceed to rub your eyes. There was a lot of swearing while I stumbled backwards trying to find the faucet to run warm water in my eyes. So far, the witch hazel challenge was a real witch. I was already counting down the days to freedom.

3. The Second Day Of Witch Hazel

Much to my surprise, I woke up with both eyes in tact. My face pretty much looked the same as it had the previous morning. I decided to try it out in the morning this time and used a cotton swab to apply the witch hazel carefully avoiding the area around my eyes. In the evening, I did the same thing and was surprised how much dirt had accumulated on my face even though I stayed inside my apartment for most of the day.

That morning, I woke up with dry skin around my mouth and had a few tiny bumps around my hairline. In attempts to remedy this, I used a coconut oil based moisturizer after my wash and my skin felt instantly better. A few hours later, those bumps had decreased substantially. I used witch hazel again that evening, but first I used warm water and a drop of oil to remove my mascara — I was not about to go through the temporary blindness of Day 1 again.

5. On The Fourth Day Of Witch Hazel

Since my face had been so dry the previous morning, I skipped the morning witch hazel routine and went straight for my moisturizer. After using witch hazel in the evening, I peered at my face and realized it had a slight dryness to it, so I applied my moisturizer before hitting the sheets.

My last day of the experiment wouldn't be my last day of using witch hazel. Though we got off to a rocky start, I already became accustomed to the easy, effective nightly routine of using witch hazel at the end of a long day... especially for those nights when I come home tired and maybe even a little drunk. For the final documented day, I used witch hazel in the evening, quickly getting rid of dirt and oil build-up that naturally occurs in life.

Yes. While I'm still not sold on using witch hazel as your only method of cleansing, I wholeheartedly see the benefits for us oily-skinned babes (and anyone that has a hard time remembering to wash their face before bedtime). My skin felt super clean, and it appeared to keep any new breakouts away. As long as your other skincare rituals are packed with moisturizing vitamins and nutrients, you can rest assured that keeping witch hazel in your medicine cabinet is an absolute must.