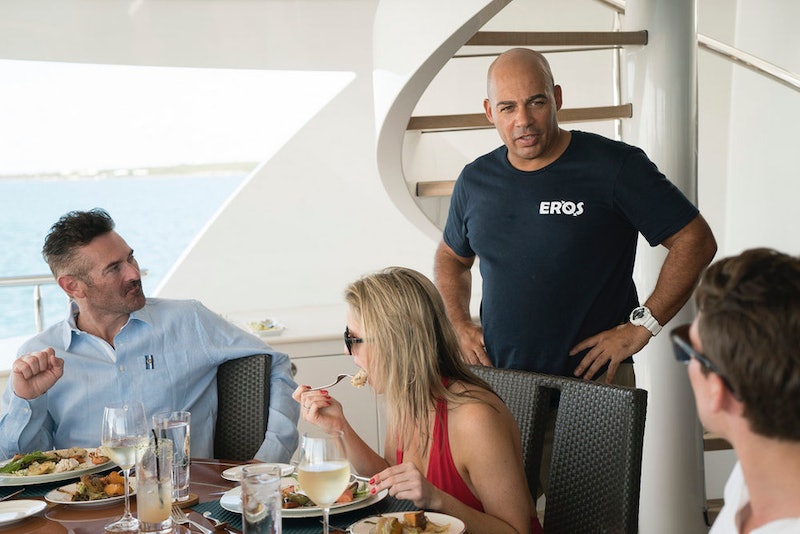 A storm was a-coming on Tuesday night's episode of Below Deck , and I'm not talking about the weather. Kate and Leon finally had the huge fight the show has been building up between the chief stew and chef, respectively, which was inspired by the worst dinner service we've seen from the crew so far this season. The fight between these two was just as ugly as you probably expected.

Charter guests on Below Deck often have some fancy requests, and this week's visitors to the Eros were no different. The one thing these foodies from Connecticut needed to have during their charter was a banging tasting menu for dinner one night.

So you would think that a fancy-schmancy dinner like this would make Leon super-excited since he is the one and only chef on board, after all. To be fair, Leon did seem stoked about preparing this tasting menu for the guests. However, the chef totally dropped the ball on this one.

Even though the charter guests made their desire for a tasting menu known on their preference sheet before they even boarded the Eros, for some reason, Leon decided to wait a bit too long to order the proper ingredients for that night. Of course, when they arrived, much of the meat was frozen, which meant dinner had to be pushed back that night.

A chef like Leon should know that a tasting menu, which consists of several courses, is not something you rush, especially when you're on a yacht and supposed to be providing luxurious service to your guests. Leon's mistake meant that the stews were unprepared with all of the little details for the dinner, such as the wine pairings and typing up the actual tasting menu listing all of the courses.

The charter guests got a little peeved about how unprofessional the whole dinner seemed. I was hoping Amy would get out there to do her frog leg dance to salvage the meal. But then Leon's delish dishes eventually saved the day, even if they had to wait for them.

But this happy ending didn't prevent Kate and Leon from going at it after the dinner was over. Hold onto your beef cheeks, folks! Kate called out Leon for waiting until the last minute to order the ingredients and almost jeopardizing the dinner service. Leon made up some excuse that he couldn't order any sooner and then continued to berate Kate, saying she's not as good at her job as she thinks she is, warning her to "be careful," and then telling her he doesn't like her one bit.

Kate and Leon have fought for the better part of the season over a lack of communication and the fact that neither of them respect the other. Kate doesn't consider Leon a yacht chef since he has cooked on a cruise ship a.k.a. the ocean liner the QE2, which is actually a very famous ship. Leon just doesn't want to take orders from Kate for some reason.

The chief stew and chef on a yacht work extremely closely together, so Kate and Leon better patch things up quick if they want to continue getting those dollar dollar bills, y'all. Both of these crewmembers have a lot of pride and have been known to hold a grudge or two, so I think that's going to be easier said than done.