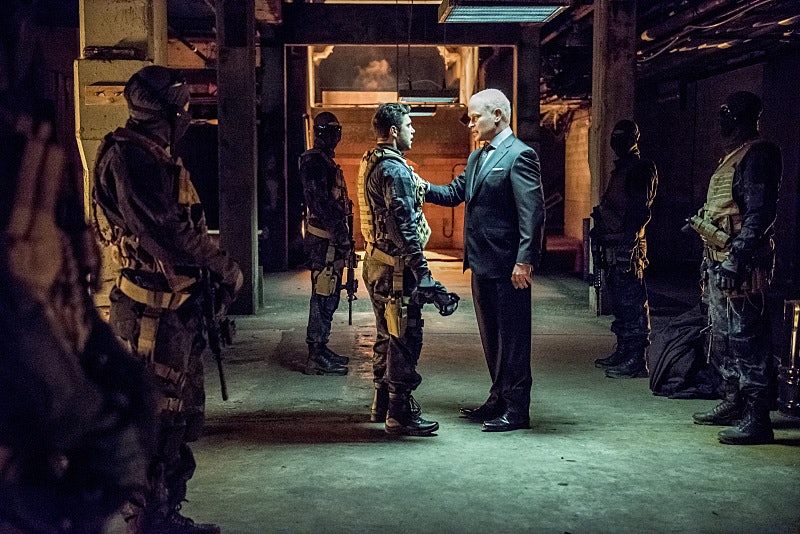 Despite literally driving off into the sunset with Felicity the last time we saw himm, Oliver Queen and his team have quite a few enemies to face when Arrow returns for Season 4 on Wednesday night. The series will finally introduce the hinted at Damien Darhk, and with him a whole new mess of problems. If you thought Ra's al Ghul and the League of Assassins were bad, you might be in for quite a surprise with this big bad and his team. We can catch a glimpse of Damien Darhk's "Ghosts" in the Arrow Season 4 trailer. They're a highly trained group of assassins, so it makes total sense for Diggle, Speedy, and Laurel to want Oliver to come back and help them take the new crew down. But is the formidable "Ghosts" team from DC Comics, or did Arrow invent them to give us new villains to fear?

That isn't clear just yet. While there is a Damien Darhk in the comics, and he really is quite the extraordinarily tough villain to defeat, he doesn't have a team that calls themselves Ghosts. Instead, Darhk claims to be part of the secret criminal organization H.I.V.E., or the Hierarchy of International Vengeance and Eliminations. It's a secret group that specializes in contract killings, via highly trained and armed mercenaries for hire. We don't know much about the Ghosts yet, save for their appearance in the trailer below, but maybe over the course of the season, they'll be revealed as other H.I.V.E. members.

It's also important to note that H.I.V.E. is run by the Council of Seven, whose identities are never revealed. So why couldn't Arrow decide that Darkh is on that council? If that's the case, then the "Ghosts" would take the place of H.I.V.E.'s hired mercenaries, which definitely make them dangerous enough to warrant Team Arrow asking Oliver to come home. With the support of a villain like Darhk and possibly a whole evil council, they'd have enough manpower and resources to destroy Starling City.

In the trailer, it looks as though Darhk is speaking to a group of people about his plans for the city. He wants it to die, plain and simple. It's just business. So what if the group of people he addresses are the other members of the Council of Seven? In Arrow Season 3, we first heard about Damien Darhk through Ra's al Ghul himself, who said that Damien was in the League and rose in its ranks alongside him. When Ra's was chosen as the leader, Damien found a way to escape before Ra's could kill him, taking his "loyalists" and some water from the Lazarus Pit with him. Ra's even calls Darhk's group a "hive."

Those are the only clues I need to predict that we're about to meet the H.I.V.E. on Arrow, which means things are going to get ugly in Season 4.