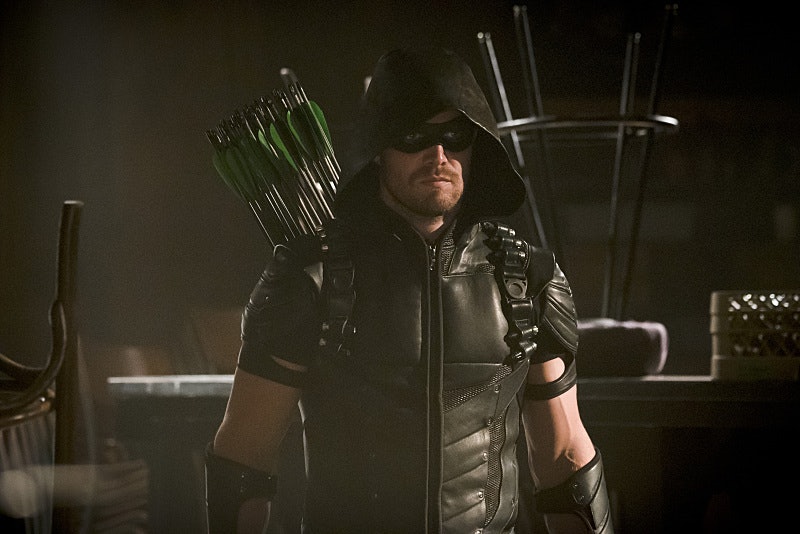 Arrow's Oliver Queen has been through a lot. He was stranded on an island for five years, which is not easy and returned home to become a vigilante with the bad habit of killing whomever he determined deserves to die. Three seasons and as many aliases later ("The Vigilante," "The Hood," "The Arrow,"), Oliver Queen will start Arrow Season 4 no longer the trigger-happy (bow-happy?) crime-fighter of uncertain moral standing. Instead, he's a reserved and intelligent superhero. Well, he was before he was brainwashed by Ra's al Ghul into becoming "Al Sah-Him," joining the League of Assassins, and turning on his allies. Oliver Queen has been through a lot. While he goes through trials, saves his city, and changes names and costumes various times, fans seem to have one big question they want to be answered: When will Oliver Queen become Green Arrow?

Arrow is inspired by the popular "Green Arrow" character from DC Comics. However, after three years of crime-fighting, no one on the show has ever said the words "Green" and "Arrow" next to each other on The CW series, especially not as a name for Oliver's crime-fighting alter ego. However, information about the upcoming fourth season of Arrow indicates that he might finally be given the name he was always meant to have.

Season 4 introduces a lot of new threats to Starling City, not the least of which comes in the form of the menacing Damien Darhk. It's also introducing Oliver to a new costume, one that looks less dark than his previous outfits. Between "The Arrow" dying and his new outfit, it seems likely that Oliver may soon be adopting "Green Arrow" as his official crime-fighting alias.

Another thing that will be changing about Oliver in Season 4 is his sense of humor. In an interview with IGN, co-showrunner Wendy Mericle said, "There’s a little bit more humor - and coming from Oliver as well." The TV version of Oliver is currently much darker than the comic book character who has a history of shooting arrows that have replaced the arrowhead with boxing gloves. However, now that Arrow's star has more fulfillment in his life, it sound likes there will be a little more humor to the show, which is a nice change of pace from the sulk-fest that was Season 3.

As if all of the above wasn't clear enough evidence that Oliver will soon officially be Green Arrow, the first episode of Season 4 is literally titled "Green Arrow." It does not get more obvious than that. That would be like naming Star Wars Episode V, "The Empire Strikes Back And Also Darth Vader Is Actually Luke's Dad."

Now that Oliver has spent five years as a castaway and three years as a crime-fighter, it seems to be the appropriate time to assume the title that destiny has promised him, and become the Green Arrow, just in time for the Arrow Season 4 premiere, Wednesday night at 8 p.m.