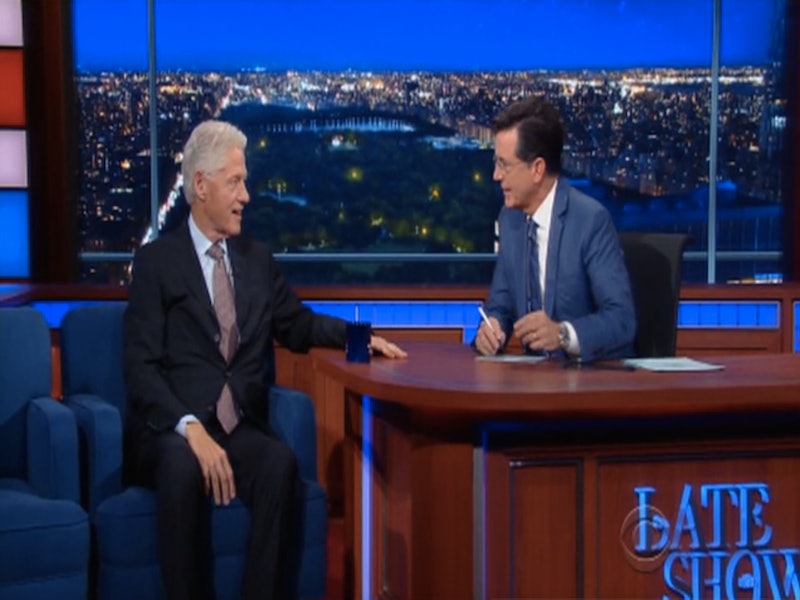 Man, I am loving Stephen Colbert in mainstream late-night. Continuing his political A-list lineup on The Late Show, Colbert welcomed former president Bill Clinton to his show, during which they chatted about everything from Pope Francis to the Clinton Global Initiative and the 2016 election. The 42nd commander-in-chief also addressed the rumor that Clinton asked Donald Trump to run for president, and the story behind that secret call was finally revealed.

After giving his obvious endorsement of wife Hillary Clinton — or "the lady I saw singing on Saturday Night Live" — Clinton was later asked to re-assume his unofficial role of "secretary of explaining stuff" in President Obama's administration. The title harked back to 2012, when Obama praised Clinton's famed Democratic National Convention speech and referenced a commented made by a Twitter user (though the original joke used a different S-word).

After asking Clinton to give his two cents on why both Vermont Sen. Bernie Sanders and Republican frontrunner Donald Trump were doing so well this early in the election, the late-night host referenced a longstanding rumor that the former president had called Trump and asked him to run for president. Trump himself has denied this rumor, but this time, we got to hear the answer straight from Bill's mouth.

Yeah, I get credit for doing a lot of things I didn't do. ... His daughter told my daughter that he had tried to call me, and I didn't get the message. So, I simply called him back, and I don't know whether he ever intended to discuss this with me or not — and this has happened to you before, I bet — I think by the time I got him back, he had forgotten why he had called me in the first place.

Colbert added, "You never said, like, 'Iowa is beautiful this time of year'?" To which Clinton quipped:

No, I had a very pleasant conversation with him, and it wasn't about running for office. So I missed a chance.

Earlier, Clinton called Trump a "master brander" with "macho appeal" who has thrown his weight behind both Democrats and Republicans in the past. With the possibility of a Hillary vs. Donald showdown, it's clear that whatever friendly relationship the Clintons had with the business mogul in the past is long gone (at least for the time being). That's why it's unlikely there'll be any other phone calls between their two camps — that is, unless they are the final two standing next November and a concession call is in order.

More like this
'Waterloo Road' Is Back, With More Than A Few Familiar Faces
By Sam Ramsden and Vivian Iroanya
Matt Hancock Broke a Major Rule With I’m A Celeb
By El Hunt
This Classic Movie May Be Key To Figuring Out Who Dies On 'The White Lotus'
By Grace Wehniainen
Kim Cattrall Had A 'Sex And The City' Reunion With Creator Darren Star
By Grace Wehniainen
Get Even More From Bustle — Sign Up For The Newsletter