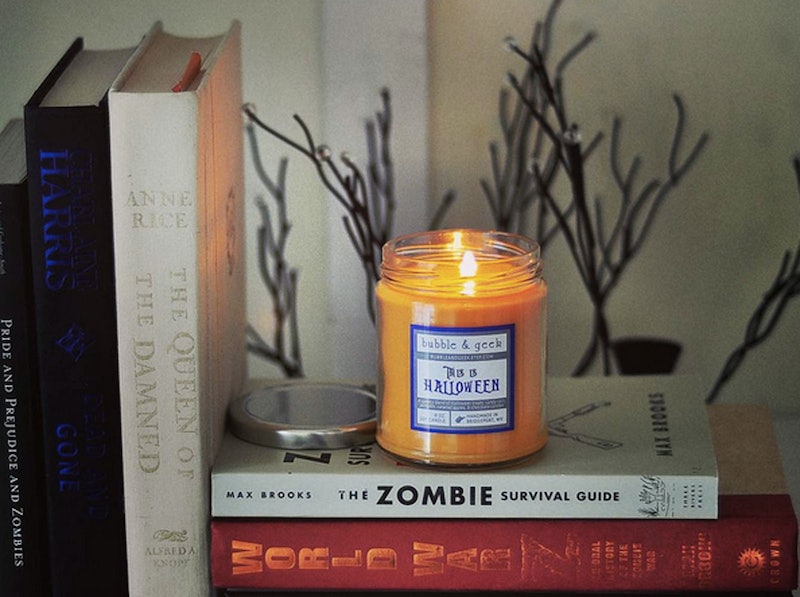 Growing up, my mother basically had to physically push me out the door on Halloween. Sure, I was all for pumpkin farms and scarecrow decorating, but once the sun went down on All Hallows Eve — forget it. I did not like being scared, and my costume choices definitely reflected that: a ladybug, a ballerina, a hippie. One year I was even tie-dye… yes, just the noun. Basically, I completely missed out on the haunted gene.

I still don’t love all things frightening. Scary books, movies, television dramas, commercials, greeting cards that play eerie music — no thank you. But for the nine super-scary classic novels on this list, I will always make an exception. There’s just something about them. From masters of the macabre like Edgar Allan Poe and Stephen King, to monster manufacturing wordsmiths like Mary Shelley and Bram Stoker, the writers of these terrifying tales have conjured up hauntings that are just too good to pass on; even for the scaredy-ist of scaredy-cats.

Get ready to sleep with a flashlight next to your bed and a dresser propped against your door, because here are nine terrifying classic novels to get you in the mood for Halloween, even if you’re a total chicken like me.

The House of the Seven Gables by Nathaniel Hawthorne

Not only did Nathaniel Hawthorne grow up in the utterly bewitched Salem, Massachusetts, he is also said to be the direct descendent of a Salem witch trial judge — one who thought stake-burning was exactly what those accused deserved. Super creepy. No wonder the writer penned The House of the Seven Gables, a tale of a 17th century house blighted by all things sinister. The hauntings began after the house was stolen from it's original owner, who was accused of witchcraft and executed, and won't stop until justice has been served.

Yet another house takes front and center stage, in one of the most terrifying tales in haunted house history. The Haunting of Hill House tells the story of one Dr. John Montague desire to prove the existence of the supernatural, by gathering together a group of paranormal witnesses in Hill House. One subject, Eleanor Vance, begins to develop a stranger-than-usual relationship with the house — one that will have disastrous consequences.

The Legend of Sleepy Hollow by Washington Irving

This is maybe the most classic of all Halloween-time stories. The Legend of Sleepy Hollow features a small countryside community haunted by, amongst other things, the infamous Headless Horseman. Whether the hauntings are real or imagined is up for the reader to decide, but the fact that they might just amount to nothing more than a gentlemanly squabble over a girl is what makes this story even more enduring.

The novel that terrified aspiring writers everywhere, Stephen King's The Shining is filled with one supernatural horror after another. When Jack Torrance and his family agree to be off-season caretakers for the Overlook Hotel, you just know there's more to this assignment than it seems. Jack's son, Danny, is already a bit haunted on his own, and seems to inspire the hotel into extreme paranormal activity. There's just something about buildings taking on lives of their own that horror writers everywhere must love.

This novel begins almost absurdly banal — the Transylvanian Count Dracula is seeking some legal advice for his real estate dealings. But the story takes a terrifying turn when Dracula imprisons his legal advisor and then sets sail for England, where he plans to search for fresh blood and humans to convert to the undead. This is definitely not Bella Swan's vampire.

From unexplained murders to a heart that keeps beating long after it's owner is dead, Edgar Allan Poe is the all-time master of the scary short story. Filled with poorly-lit rooms and thunderstorms, doors and windows that lock from the outside, and inanimate objects that seem to move on their own, The Complete Tales and Poems of Edgar Allan Poe will keep you in reading all Halloween weekend long.

When Miles is expelled from his boarding school, his new governess senses the the circumstances of his expulsion are more complicated than they seem. After Miles' return, she notices a strange young man and woman have been wandering around the family estate — and then learns of the recent death of two estate employees; lovers with whom Miles spent time before leaving for boarding school. It begins to seem like the haunted sightings and Miles' expulsion might have an eerie connection.

I know I don't have to remind you that Frankenstein is actually the scientist and not the monster. The novel, famously drafted as a scary story exercise at Lord Byron's villa one summer, tells the story of Dr. Victor Frankenstein who has learned to reanimate life into non-living body parts, and thus constructs his sentient "monster" (though he intended for the creature to be beautiful.) Terrified by the creature, he abandons him completely. But Frankenstein's monster follows him, demanding compensation for his miserable existence.

Alleged to be a true story, The Amityville Horror recounts the paranormal experiences of one Long Island family who move into the home of a convicted murderer — who just happened to kill his entire family inside the home. Despite attempted exorcisms of the house, hauntings continued. The moral of the story: if you're offered a six-bedroom, fully-furnished house with a pool and a boathouse for $80,400, think twice.