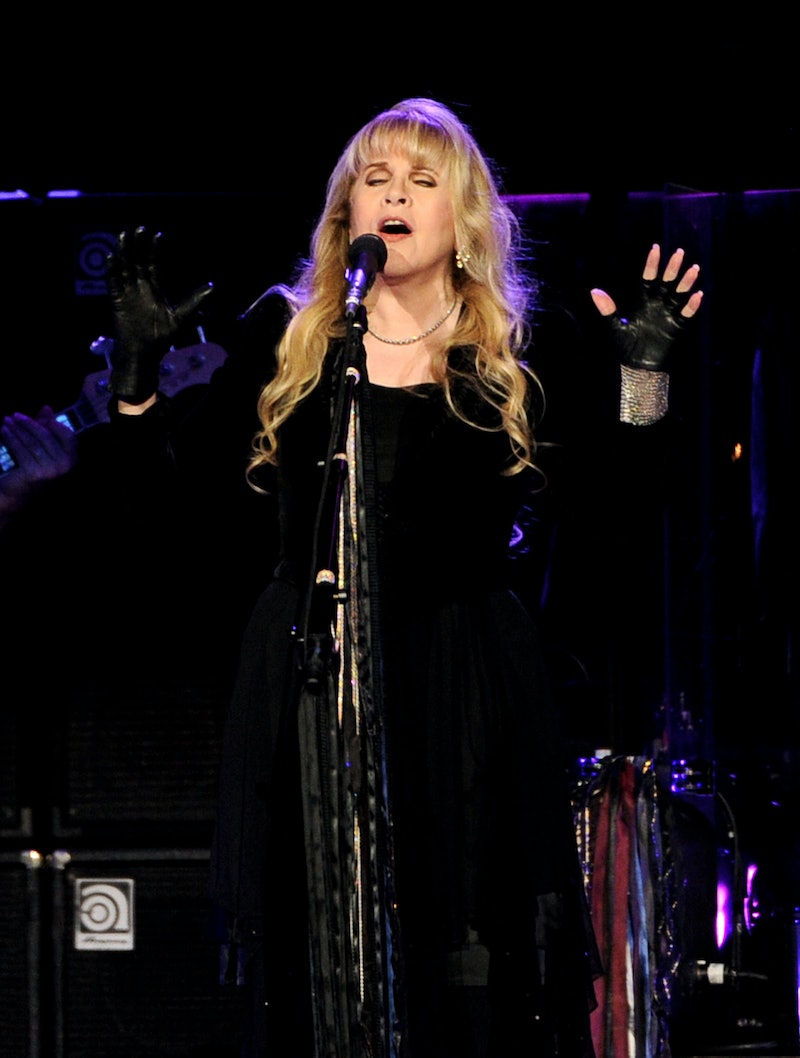 In the music world, there are legends, and then there are gods. Stevie Nicks, she of Fleetwood Mac fame, is the rare person who is both. Throughout her five-decade long (!) career, Nicks has become nothing short of an icon, thanks to her musical talents, famous relationships, and general badass attitude. Yet while most people seem to feel that her biggest and best moments happened long ago, back in the '70s and '80s, we feel that Nicks' life actually hit its enviable peak a few decades later, an argument that's never been proved truer than over the past 12 months. From sold-out tour dates to appearances on hit TV shows, 2013, it seems, was the Year of Stevie Nicks. A look back at the singer's most memorable moments:

On a March episode of the OWN Network's Oprah's Master Class, Nicks spoke candidly about her very public breakup with Fleetwood Mac bandmate Lindsey Buckingham, the death of her mother, and her struggles with addiction, among other personal topics. It was a rare, intimate look into the life of the generally private singer, and sparked an newfound interest in Nicks that lasted the rest of the year.

March — Spoke Up For Women's Rights

In an interview with NPR, Nicks shared her feelings about the recent court rulings and political dramas regarding women's rights issues, saying that today, "I see women being put back in their place. And I hate it." Nicks, a woman who began her career as one of the few strong female figures in a male-dominated industry, said that she used to tell bandmate Christine McVie that "when we walk into a room we have to float in like goddesses, because that's how we wanted to be treated." Damn right.

In April, Nicks joined Lindsey Buckingham, Mick Fleetwood, and John McVie on Fleetwood Mac Live, a tour that spanned 14 countries across the globe. The nearly 25-song setlist included old hits like "Dreams" and "Rhiannon," as well as newer songs like "Sad Angel" and "Mirage." The tour received rave reviews, with substantial praise going to Nicks' unfailing energy and stronger-than-ever voice.

While just four songs and less than twenty minutes long, the Extended Play EP was the first new music released by Fleetwood Mac in ten years. Each song was written by Nicks or Buckingham, and two of them, "Without You" and "Sad Angel," were performed on the band's 2013 tour.

Fans of Tavi Gevinson, the teenage creator of Rookie magazine, know that if there's anything the 17-year-old loves more than flower crowns, it's Stevie Nicks. Apparently, the feeling is mutual, because at an April concert where Gevinson was in the audience, Nicks dedicated "Landslide" in her honor. Mentioning a TED talk Gevinson gave in which she shared her motto of "Just be Stevie Nicks," Nicks called Gevinson a "brilliant, strong, powerpuff girl" and, if that wasn't cool enough, met Gevinson after the show to give her a necklace. In interviews, the teen has described the concert as "the best moment of my life," and this is coming from a girl who's been profiled in the Times and has co-starred in a Golden Globe-nominated movie.

June — Called 'The Fairy Godmother of Rock' in New York

It's not like the world didn't already know it was true, but in a June issue, New York magazine profiled Nicks and called her "The Fairy Godmother of Rock." Because, duh.

In possibly the best casting decision ever, Ryan Murphy and the people over at AHS: Coven managed to get Stevie Nicks to film an appearance on the show. Fans of the series know that a certain character worships the ground Nicks walks on, so while few details have been leaked about what Nicks' role on the show will be, there's no doubt it'll be a must-watch event.

December — Released In Your Dreams

On December 3rd, Nicks released In Your Dreams , a documentary chronicling the making of her 2011 solo album. The film features Nicks writing songs, working with Mick Fleetwood, and performing in music videos, and is available to buy online.

We never thought we'd be jealous of the singer who made "A Thousand Miles" a thing, but on Dec. 27, we found ourselves green with envy when Vanessa Carlton got married in a wedding officiated by none other than Stevie Nicks. In a photo from the ceremony, Carlton wrote, "Thanks Stevie for marrying us!" Because, obviously, if you're lucky enough to have Stevie Nicks officiate your wedding, you're probably on a first name basis.