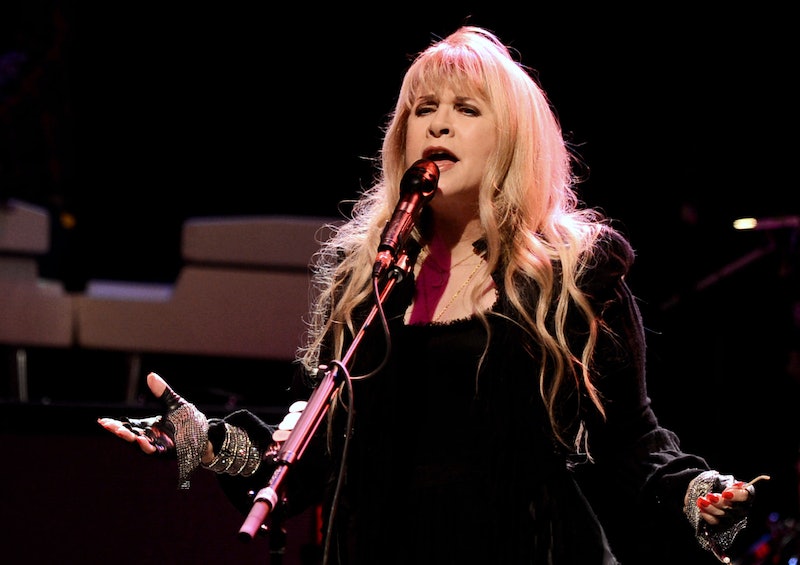 Congratulations, Ryan Murphy. You're officially friends with everyone we worship. The Murphster just announced, via his Twitter, that legendary songstress and Fleetwood Mac lead singer Stevie Nicks will guest star on American Horror Story: Coven . You know, it's about damn time. Having Jessica Lange, Angela Basset, Kathy Bates, Patty LuPone, and Lily Rabe on screen didn't spoil us nearly enough.

Of course, this guest role is a little more magical than that of LuPone's limited, but fiery, appearances because Misty Day (Rabe) quite literally worships Nicks, her music, and her classic twirl dance. Naturally, any appearance by Nicks should include Misty — don't forget, folks, she can send gators after those who don't do her bidding — and an encounter with Nicks would blow her nature-loving mind.

Earlier this season, Misty schooled us on the "secret meaning" of "Rhiannon," saying (like so many of Nicks' antagonistic fans in the '80s) that the song served as her witchy anthem and every time Misty is shown in her cabin, you can bet a regenerated corpse that she's going to be listening to Nicks' music. A Nicks appearance without Misty just seems cruel, and should the bayou-bound witch share some screen time with Stevie it would only make sense that the singer plays herself — it's pretty absurd to make a super fan forget what her idol looks like for the sake of a scene.

Plus, if we remember what Murphy did on Glee when Brittany S. Pierce met her idol Britney Spears in a dream induced by dentist's office laughing gas, it seems he has an M.O. for his characters' improbable meetings with famous people.

Still, this is American Horror Story, so for all we know, it could turn out that Nicks is Misty's estranged mother, her neighbor on the bayou, or her yet-to-be-seen dusty shawl purveyor. Where witchcraft is involved, I'm not ruling out any possibilities.