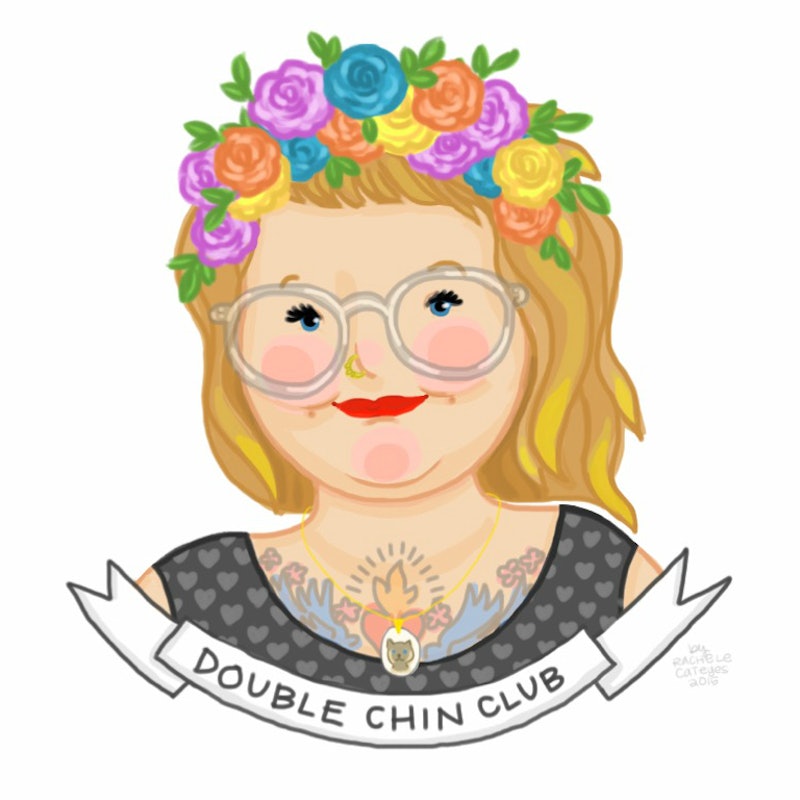 Are you sick of all the fatphobic haters but unsure of how to vent your body-positive rage? If I may make a suggestion, Rachele Cateyes' Glorifying Obesity illustrations are an excellent place to start. Just a quick browse through the series' Facebook page is enough to calm the ire of even the most frustrated among us — a nigh-impossible feat, I know, but one that Cateyes accomplishes nonetheless. Can I get a praise hands emoji?

Juxtaposing strong, body-positive statements and flowery, delicate imagery, the series unapologetically sends a glorious "eff you" to fatphobia. It should be noted that I mean that in the most literal way possible: Glorifying Obesity features more cursing than the time my uncle tried to grill burgers at a family reunion but wound up getting drunk and accidentally stabbing himself in the kidney instead. (True story, I promise.) "Fat bodies are fucking awesome," reads the first illustration, and the sentiment remains strong throughout the rest of the series.

In addition to being her preferred aesthetic, Cateyes says that the bright, colorful nature of her illustrations are designed to prove a point. "I am not a victim. I don't live a dark, miserable life," the Portland-based artist tells Bustle via email. "Yep, I am fat, morbidly obese, glorifying obesity and I am okay with it."

Cateyes told the Huffington Post that the project's title came from everyone's least favorite brand of fatphobia: Accusations that she's "glorifying obesity" just by, you know, existing without apologizing for her body.

"I don't have to justify my choices or sacrifice my privacy so I might be granted the right to exist by a bunch of strangers on the Internet," she adds to Bustle. In fact, Glorifying Obesity came about in the first place thanks to the tireless harassment of fat-shamers online — although this probably wasn't the outcome they were envisioning.

"When I started the project a month ago, there was a few people in the media doing and saying not very nice things about fat folks," Cateyes tells Bustle. "I, still being stalked and harassed by some really terrible groups, got tired of everyone acting like fat people owed them something... I don't want to put any time, energy or labor into confronting the trolls and bullies — and I don't think they deserve any attention!"

"I wanted to take all this garbage that was being said about us, and spin it into something positive. I love radical activism and reclaiming words. I saw an opportunity to take some of the power back for the fat community," she continues.

As for the haters out there? Cateyes would like to thank them for providing material for her illustrations. "Thanks for the rad fat club slogans," she says. "You're just providing me with more material that I can use and sell in my shop."

Check out more images below, and to see more, head over to the Glorifying Obesity Facebook page.