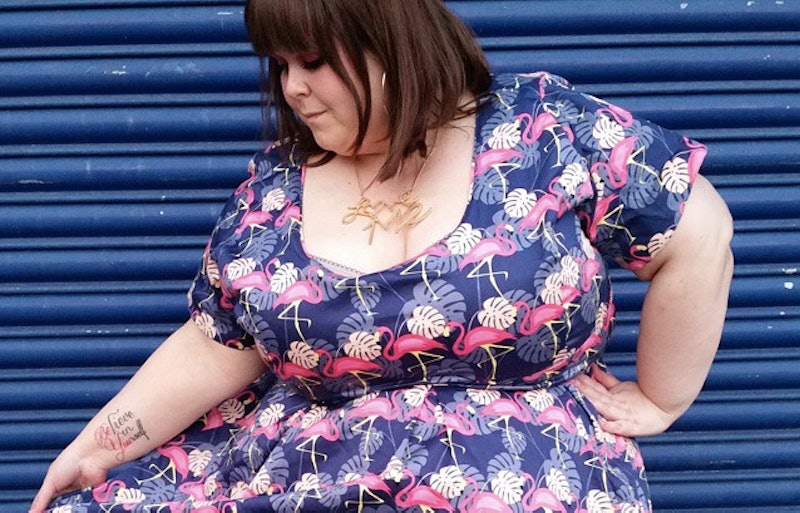 When it comes to the argument for fat positivity, it should easily be summed up by, "Why shouldn't I love myself?" but too often, the person you're arguing with just won't take that for an answer. Of course, everyone has a bad case of l'esprit de l'escalier at least once a week, where you think of the perfect comeback to a hater after the argument is over. Personally, I always end up acting out the arguments again in the shower, showing off my witty retorts and perfectly concise arguments after I've had a few hours to think them up and I'm not stuck in the heat of the moment.

In terms of body positivity and more specifically fat positivity, though, I used to simply refuse to argue with people over it because I'm a sensitive little angel who takes things too personally. Now, however, I believe that I need to fiercely defend my views and the self worth of other fat women, because who else will? The louder the noise we all make collectively, the sooner the world is going to see some change.

Of course, strongly believing in something doesn't mean you can always articulate it easily. Especially when you're caught off guard or you're so angry you're on the verge of crying or it's been a really long, hard day and you just want to drink your pint in peace. It might be easy enough to just give in and let the argument go, but with some pre-prepared answers, arguing your case could be worth the hassle. After all, people need to be re-educated when it comes to basic acceptance of others.

1. Being Fat Used To Be Celebrated

Look at Renaissance art, and then look at your surroundings. Consider for a minute that people's bodies haven't changed, but our perceptions of them have. It's not like fat people were suddenly invented in the 21st century just to piss someone off. Fat people have always existed and once upon a time, they were even celebrated for being plus size. This doesn't mean we should be glorifying plus size bodies as the only good bodies, but it does mean we should remember that notions and constructs of beauty are ever-changing and pretty non-cohesive.

2. How Does One "Glorify" Obesity?

I hate the "it glorifies obesity" body shaming argument fate shaming types always throw out there, purely because it literally makes no sense. When is a thin person who's benefited from thin privilege their entire life going to see a picture of me in a bikini and think, "You know what? I'm going to gain a shitload of weight"? The only effect "glorifying obesity" is going to have is making other plus size people realize that they, too, can love themselves — that their bodies are not the enemy, but social perceptions of those bodies are.

Faux concern over a fat person's health is completely phony. Do you go around smacking cigarettes out of people's hands in the street? No. What about your thin friends eating McDonald's every day? Are you stopping them? No. So stop acting like your issues with somebody else's weight comes from a place of concern over health. You're just reaching for excuses for your shitty behavior. Not just that, but you're invalidating, ignoring, and insulting all the healthy fat people in the world, too.

4. Everyone Deserves To Love Themselves

It's as simple as that.

5. You Would Never Tell A Friend They Should Hate Themselves

Odds are, if you're living in the 21st century you have at least one fat friend. Would you tell them that you think they don't deserve to be happy or to feel good about themselves? If you wouldn't say it to them, how can you say it to somebody you don't know?

6. We're All Supposed To Look Different

Most likely, the reason people try to make somebody else feel insecure is because they feel insecure. If a person has invested a lot of time and money into adhering to traditional beauty standards, and is then told that those standards don't matter and don't need to exist, they're going to be bitter. Try and get them to evaluate where their feelings of hatred come from.

More than that, though, you should let yourself have a laugh. These people are putting a lot of effort into being negative whilst you get to use your energies on loving yourself and having fun.