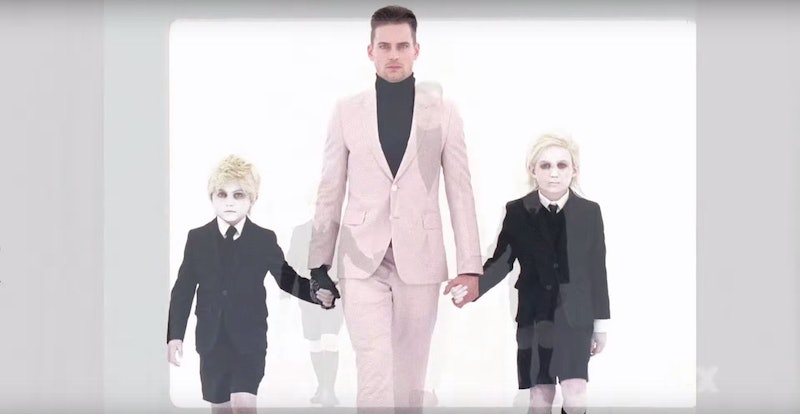 Kids stay free at hotels, right? JK, that was dark. The children on American Horror Story: Hotel are one of the nine billion terrifying things that happened during the premiere of the show, but mainly because I don't know WTF is going on with those children. Specifically, Holden, Detective John Lowe's missing son. Is Holden dead, or is Lady Gaga's The Countess just playing a really screwed up game of hide-and-seek from his parents for years? The AHS fan in me says he's dead, especially because there seems to be a few clues supporting that theory. Sorry, Holden.

A flashback on the premiere showed Detective John Lowe's family at a carnival in 2010. He was there with his wife, Alex, his daughter, Scarlett, and his son, Holden. Splitting up from the ladies of the family, Holden and his father go to the merry-go-round so Holden can #BeAKid and go around in circles while adults look on. Really fun stuff. The only thing is, after one time around, Holden is no longer on the horse with the yellow feet, and has disappeared. We are left to assume that Holden has been abducted, driving a wedge between Alex and John.

So if Holden has been at the Hotel Cortez since his abduction, and assuming AHS: Hotel takes place in present day, it has been about five years since John and Alex lost Holden/ he's been a resident of Hotel Cortez. And judging by the few moments we saw Holden in that bizarre game room The Countess has tucked away, something tells me he's dead. Here's why.

So the biggest clue as to why Holden is dead is based on how he looks. While looking sharp in a suit — I wouldn't expect anything different from a child of Gaga — Holden looks the exact same as he did when we was abducted. His younger sister, Scarlett, has aged at a normal rate for a child, but Holden hasn't.

No offense to the actor that plays Holden, but he looks dead. Like, super dead. It could be as easy as that.

Yeah, that's not really a healthy diet. Sure, alive people can drink blood, but Alive Holden would probably prefer to eat Pop-Tarts or pizza than some rando's blood. Dead Holden, on the other hand, probably DGAF about what he's drinking.

More like this
What Is Ariana Grande's Net Worth? When It Comes To Money, She Has No “Problem”
By Hugh McIntyre
Everything To Know About The Musical ‘Joker’ Sequel – & Lady Gaga’s Role
By El Hunt
The Best Memes & Tweets About Lady Gaga Reportedly Joining 'The Joker' Sequel
By Grace Wehniainen
What’s New On Netflix: 'Stranger Things' & 'Mean Girls'
By Arya Roshanian
Get Even More From Bustle — Sign Up For The Newsletter