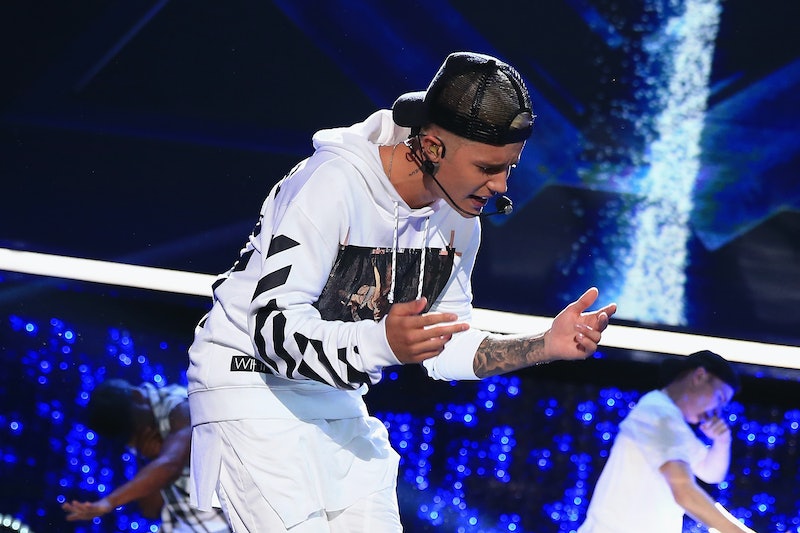 I do not envy the lives of celebrities. Sure, you get loads of free things, the ability to apply to be in Taylor Swift's girl squad, and the potential of rubbing elbows with Tom Hiddleston at the Oscars, but the one thing you don't get is privacy — just ask Justin Bieber. On Wednesday people lost their minds over a photo of Bieber swimming naked in Bora Bora, and it sparked a terrible/completely hilarious Twitter pun with the Biebs new single "What Do You Mean?" Those who got an eye full of Bieber's nether regions, which were taken by a supposedly unseen paparazzo and posted on the New York Daily News, have began tweeting the line "What Do You Peen," poking fun at the song, and, well... you know. Whether you're a Bieber fan or not, it can be hard not to chuckle at the controversial celeb's nude photo scandal, and the ensuing pun — but let's not forget that actually looking at Bieb's "peen" isn't cool.

In August of 2014, website 4Chan leaked nude photos of many female celebrities, including Jennifer Lawrence, Rihanna, and Aubrey Plaza. Lawrence was later asked about the photos during an interview with Vanity Fair and declared: "It’s my body, and [sharing the photos or not should] be my choice, and the fact that it is not my choice is absolutely disgusting." I stand behind Lawrence's belief that her naked image should belong to her and her alone, which means that I also feel the same way about Bieber's. Bieber didn't give the masses permission to look at him naked, and yet, here he is, a joke on Twitter.

Some people might argue that Bieber shows plenty of pics of his body on his own social media accounts, and therefore probably won't mind people looking at these nude pics. The difference there is that Bieber is the one publishing these photos, not some tabloid who grabbed some photos while Bieber was vacationing. Bieber may be a guy (and may ultimately feel less violated by these photos than his male peers) but he still has the expectation to privacy. Just like Lawrence, it's his body, and should be his choice to show it off.

So far Bieber hasn't released a statement about "What Do You Peen?" or the nude photo leaks, and for all we know he could laugh it off along with the internet. But until he does that, maybe we should refrain from checking out what's going on underneath Bieber's swim shorts.