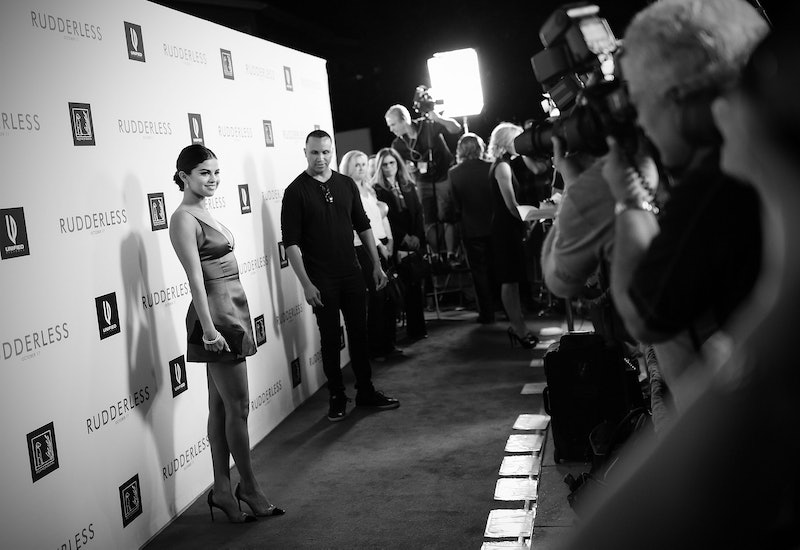 The world is still reeling from Selena Gomez's revelation about her struggle with illness on Wednesday. During an interview with Billboard, Gomez revealed that she has lupus, and that it was "what [her] break was really about." The singer has gone through chemotherapy to deal with the incurable disease, and, during that time and straight up until now, she states that "it's so disappointing that I’ve become a tabloid story." While the 23-year-old was not specific about during exactly which point in her career this break from the spotlight took place, the best guess seems to be the relative low-key life she led between the release of her debut album Stars Dance in 2013 and her singles album For You in 2014. In fact, Gomez went to rehab in early 2014, and, as she said during her interview, the media and tabloid stories about her weren't always kind or supportive.

The explanations for Gomez's rehab stint ranged from the actual reason given by her reps ("not for substance abuse") to the obvious immediate speculation (addiction and pills), with a few people even claiming that it was due to her being broken-hearted over the end of her on-off relationship with Bieber. At present, we have no way of knowing if her stay in rehab was related to her chemotherapy, was unrelated to her chemotherapy, or was done while in recovery from her chemotherapy. However, we do know that Gomez has been struggling with this illness for longer than the public was aware, and that the tabloid stories about her in recent years have been far from accurate or fair to those struggles.

So what were the tabloids saying about Gomez while she was taking a break from the spotlight?

Radar Online was reportedly the first outlet to break the story of Gomez's rehab stint. Although Radar included the statement from Gomez's rep stating that the singer had voluntarily checked herself into rehab for reasons having nothing to do with substance abuse, the site went on to say that, "Indeed, Radar has learned that Gomez, 21, had been leading a life very different from the carefully created squeaky-clean public persona: one troubled by drug and alcohol use." According to an anonymous source quoted in the article, "Her friends and family became increasingly worried that there might be a serious problem with Selena... The partying was, at times, wild."

The TMZ article carried the headline "Selena Gomez Blames Her Rehab Stint On Justin Bieber," then went on to claim that, "Sources say Selena went for a combination of problems, including alcohol, pot and prescription Ambien. She's also addicted to Justin Bieber... We're told Selena's decision was largely based on 'that crazy boy' — aka Bieber. Selena blames a lot of her problems on the excesses she was exposed to by being around Bieber and his buddies."

Celebuzz reported the statement from Gomez's rep, but also echoed the TMZ article that blamed Bieber for the rehab stay. "TMZ reports that Selena’s decision was largely based on Justin Bieber. Selena blames a lot of her problems on the excesses she was exposed to by being around Bieber and his buddies. Her camp went ballistic after photos of her joyriding with him on Segways, and that is when she reportedly entered rehab. Keep your distance from the Biebs Selena, the boy is reportedly bad news."

The Perez Hilton article combined the above versions of the story, reporting that Gomez "was so 'exhausted' and 'broken hearted' that she went to an Arizona rehab center for a two-week emergency stint in early January." The story later added that, "We knew Selena wasn't feeling fabulous after canceling her tour and breaking up with Justin Bieber for the 1,293,595th time, but we had no idea she was getting mixed up in the very serious disease of addiction."

While the Star Magazine article teased their version of the news with the headline, "Selena Gomez's Rehab Shocker," it wasn't long into the article before the story revealed that, "Selena’s rep insists she checked in for exhaustion only, but Star has learned that, before her rehab stay, she’d been smoking marijuana and using prescription drugs. A friend of the 'Come and Get It' singer says this behavior began when she started seeing Justin, who she frequently talked about during her time in treatment."

The most ironic part of all of these stories is that they came only one month after outlets were claiming that Gomez had cancelled the Australian leg of her tour due to rumors of a lupus diagnosis. The diagnosis was unconfirmed at the time, but the fact that it only took a month for the public to go from sympathizing with Gomez in December 2013 to painting her as a broken-hearted party girl in January 2014 really just goes to show just how insidious public opinion can be, and how right Gomez was to take a step back from all of that and focus solely on her recovery.

Now that she has been brave enough to be honest about her struggle, and everything she has gone through to become as happy and confident as she is today, we owe it to her to give her the basic human respect that she has always deserved. After all, you never truly know what's going on in a person's life — even if they're famous.