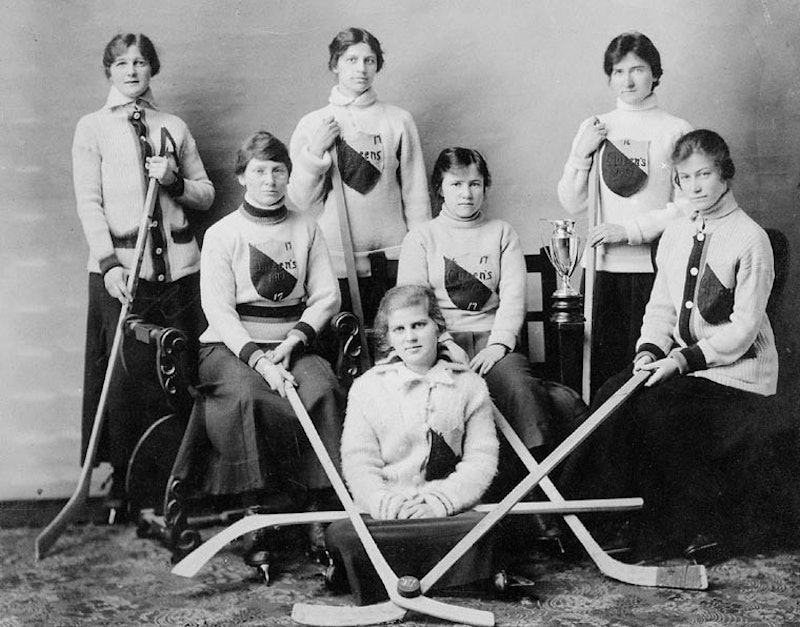 It's an exciting time in women's ice hockey as the National Women's Hockey League starts their first season this Sunday. But women's ice hockey also has a long history, albeit not one of being well-supported or well-funded. But as the first professional women's league to actually pay its players gets underway, it's worth taking a look back at women's hockey in history. Spoiler alert: It looked a lot different back then than it does today.

As with most sports, women have been playing ice hockey in some capacity ever since the sport came into existence; however, they were either discouraged from playing at all, or their leagues and teams were not taken seriously. They also typically had to play in way more inconvenient clothes. Skating in a long skirt? No thanks. And much like other sports, women still haven't achieved full equality yet in ice hockey yet.

There now is, at long last, a professional women's hockey league that pays its players, true — but it only has four teams so far, and trying to compare the salaries with those in the men's league is an exercise in farce. Still, progress is progress, and in honor of the NWHL's opening season, now is a good time to look back at what women's ice hockey has been like through history.

Ice hockey first began in Canada in the 19th century, though it was based on stick and ball games from northern Europe. The first indoor ice hockey game was played in Montreal in 1875, though the first amateur leagues didn't get started until the 1880s, and the first professional league wasn't created until 1900. And it seems that women were interested in the sport from the very early days — the above drawing of women skating with sticks and pucks is from 1893. And here you can see what is possibly the earliest photo of women playing hockey:

The photo was taken sometime in the late 1880s or early 1890s, and the player in white is Lady Isobel Stanley, daughter of Lord Stanley, the namesake for and original owner of the Stanley Cup. The NWHL's cup will be named the Isobel Cup in Isobel Stanley's honor.

It seems that even in these early times, people imagined women would be interested in playing hockey — and not in those long skirts the women above are wearing. Here's a sketch of someone's "dream of the future" for women's hockey, done in 1899:

Not too bad, as far as outfits go.

Women's hockey teams started forming early in the 20th century, though there wouldn't be a professional league for a long time. Women still played casually hockey for fun, like the women above who were photographed in 1910, and so before long, they started getting organized.

According to the official Olympics website, the first formal women's match happened in Ontario in 1891; however, women's teams didn't really get going until the 1910s and 1920s when college teams started to form in the US and especially in Canada.

Here, for instance, is the Queen's University Team from 1917:

And other teams unaffiliated with schools began forming as well. Here are two teams from the city of Vancouver from 1916 and circa 1920, respectively:

(At least these ladies have ditched the long skirts, though clearly, not everyone has yet.)

I don't know how anyone managed to skate in those. Here's another team who went with some more sensible attire, from Ontario in 1921. In fact, they look a lot like that drawing from 1899:

There were also attempts to form major leagues for women. The Pacific Coast Hockey Association, a men's league with teams in the US and Canada discussed the possibility of having a women's league to complement the men's team in the 1910s, but nothing came of it. However, several women's teams did spring up, and in 1921 the league announced their international championships would also feature a women's championship. Three teams were chosen, the Seattle Vamps, the Victoria Kewpies, and the Vancouver Amazons. The Amazons won resoundingly, and were the only team not to disband after 1921.

In fact, here they are practicing sometime in the 1930s:

Also interesting to note from this time period, reportedly the first goalie to ever wear a mask was Elizabeth Graham, of the Queen's University team, in 1927.

As The 20th Century Goes On

As the 20th century goes on, college women's hockey teams become more and more common. They also began to wear gear that more closely resembles men's hockey attire, as you can see in the above postcard depicting players from the Preston Rivulettes in 1940.

Unfortunately, after WWII, women's hockey stalled for a long time, but it eventually began gaining popularity again in the 1970s, to the point where today women's hockey teams can be found on just about any college campus that also has a men's team (which is of course also thanks to Title IX as well). Despite growing popularity, however, women's hockey wasn't added as an event at the Winter Olympics until 1998. The U.S. team won the first gold medal.

The Canadian women have won the gold in every Olympics since.

Prior to this year, there were only two semi-professional leagues for women's hockey, the WWHL, founded in 2004, and the CWHL, founded in 2006. Neither league was able to pay players, and in fact participating often costs women money since they have to provide their own gear. It's not an ideal situation, obviously, which is why there's thankfully a new league starting up.

The NWHL And Hockey Today

The National Women's Hockey League is starting out this year with their first two games happening on Sunday. The league only has four teams so far: The New York Riveters, the Boston Pride, the Buffalo Beauts, and the Connecticut Whale, but they are also the first women's league to pay their players.

Whatever happens this season, though, it's clear that women's hockey has come a long way since Isabel Stanley had to skate around in her full length skirt.