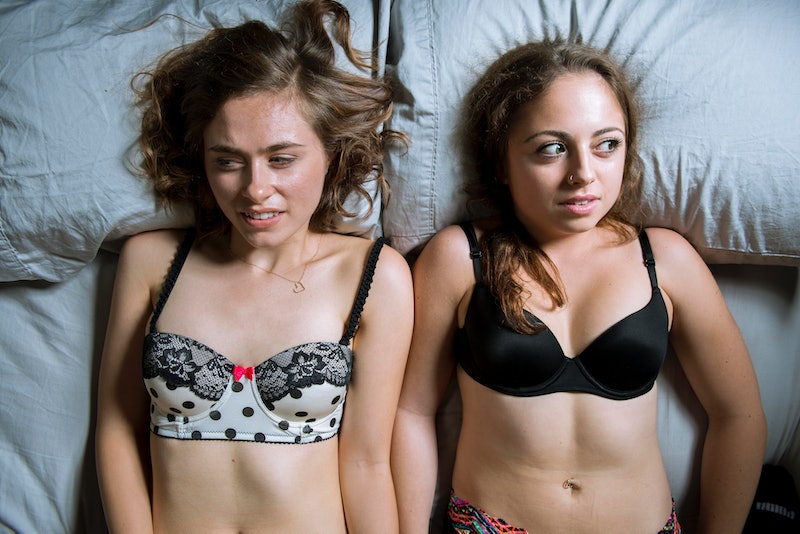 I had met this guy back in my good ol’ sorority girl days in college during an exchange. For anyone who’s not too familiar with Greek life, exchanges are like exclusive themed parties between members of one sorority and one fraternity. The guy was cute. I mean, really cute. Plus, he was single. So was I. At the time, he wasn’t looking for anything serious, and I would never in a million years consider him to be boyfriend material. But the chemistry between us was instant and not to mention super hot. Until we got back to his dorm room — and it was the worst. But how can you make bad sex better?

Bad sex happens to the best of us. It’s seemingly unavoidable. In this case, no matter how many times we tried, the dude could not make me orgasm to save his life. It wasn’t for lack of effort either. I mean, we tried different positions, many of which, ended up leaving me uncomfortably sore. At one point, I told him to just finish already because I was so over it. We even tried a change of scenery. We tried going at it on a beach during a bonfire one night. But as anyone who’s ever attempted sex on the beach would know, it’s not as sexy as it is in the movies. Let’s just say I was downing cranberry juice for the next couple of days. I guess our sexual compatibility was just not there.

They say sex is like pizza. Even when it’s bad, it’s still pretty good. I don’t really know about that. Because bad sex happens to the best of us, in the latest podcast, Bustle talks to its resident sex columnist, Vanessa Marin on what to do when you’re having bad sex. If you are, here are three ways you can try to fix it:

1. Find The Root Cause

What makes it so bad? Is it a compatibility issue? Is it boring? Maybe sex can be bad because you’re experiencing sexual pain. According to Marin, we need to spend some time figuring out what exactly makes it so bad in order to fix it.

For example, if it’s boring, maybe couples just aren’t putting enough effort in and want it to happen naturally. If someone is experiencing sexual pain, maybe they have a condition they’re not aware of. Maybe they have a past history of experiencing sexual abuse. Whatever it is, you need to take a step back to figure out the underlying cause for the bad sex in order to move forward.

Once you figure out the base problem, the key to solving it is through communication. Don’t be afraid to tell your partner what’s working and what’s not. After all, how can they help solve the problem if they didn't even know there was one to begin with?

As Marin says, don’t be afraid to give feedback. Even if it’s something small like, “To the right,” or “Can we slow it down a little?” That way, it will get you and your partner in the habit of talking about sex.

“Try to solicit feedback from your partner. Don’t be embarrassed about it. Just feel comfortable asking what they want,” Marin says.

According to Marin, one major reason why people don’t enjoy sex as much as they could is because they’re too in their heads. They overthink things. They overanalyze too much. But don’t do that. Be present!

“To me, I think it really comes down to figuring out what actually feels fun and pleasurable to you. Getting out of your head, getting more into the moment, getting into your body, and discovering the things that you like to do. Discovering the ways that your body likes to move,” Marin says. “It’s not about technique and being perfect and going through all these steps. It’s about enjoying yourself, having fun, and genuinely caring and connecting with your partner.”