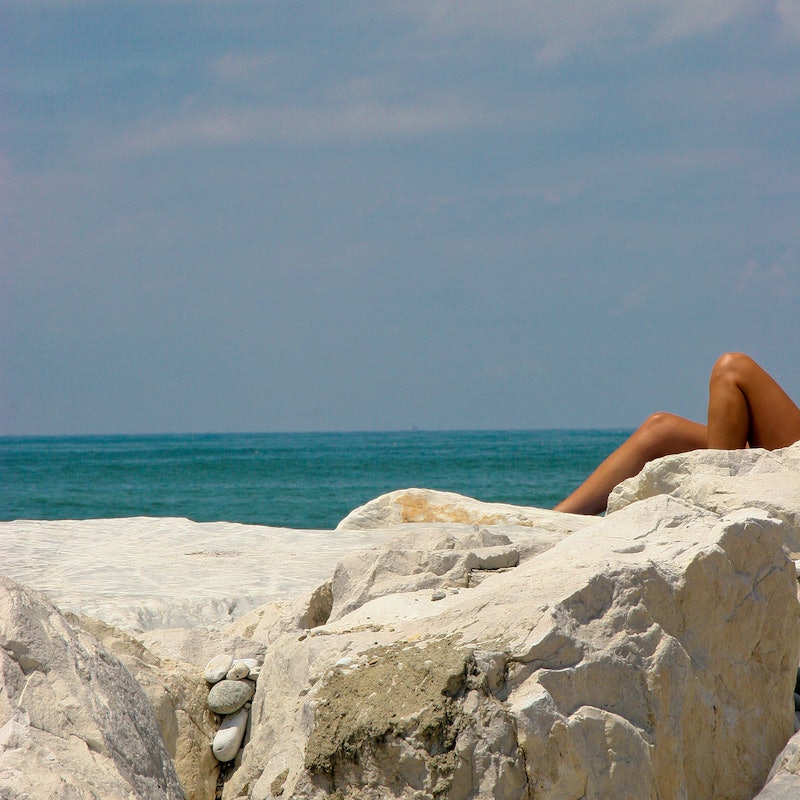 I really enjoy having sex in nature. The forest is good. A lake is great. A field. The beach. Love it. Bring it on. But as wonderful as it is to get natural in nature, it always comes with its shortfalls. As does having sex in public, no matter where it is. And as romantic and sexy as beach sex sounds, and has been made to look by countless cinematic moments, it's actually kind of terrible. Like, can we just finally all collectively admit that we've all been kidding ourselves to think that there's anything good about trying to get down in a giant pile of dirt, basically? Sure, it's "good" because you're having sex, obviously, but let's be real: The "good" stops there. Everything else is bad, mostly because you've got sand creeping into your asshole, which probably isn't the thing you were wanting in there, even if you happen to like things going into your asshole. Basically, before you go jumping on the beach sex bandwagon, consider why it might actually be the worst.

It's you against the elements out there, and while you might be drawn to the sexiness of a romp under the sun, the implications can leave you bruised, chafed and bitten (and not in the good way). Before you throw down a towel and drop your swimming bottoms, think about all the pain that could be coming your way if you go through with having sex on the beach. Here are 8 reasons why having sex on the beach (while a sexy prospect) is actually sort of the worst in a lot of ways:

Sand is the natural enemy of everything. It's small and granular and wily and gets into places you never expected that anything could get. There is nothing sexy about sand in your coochie, pee hole, mouth, ears or any other area that's generally involved in sex, foreplay and kissing. Sex on the beach involves a lot of spitting sand out of your mouth and weird chafing, all of which is a real mood-killer.

Sex on the beach is basically sex in public, unless you're there in the dead of night, in which case GET OUT OF THERE, HAVEN'T YOU EVER SEEN A SLASHER MOVIE? The beach is generally a pretty well-populated place, especially in summer, so finding a place to sex discreetly can be stressful.

What's more stressful is the presence of many children at the beach. Even if you manage to sneak off to a secluded place in the sand dunes or behind a rock outcropping, a child most definitely will find you. Children are everywhere. They are dumb, wandering idiots who crawl through bushes and climb rock formations, so chances are, wherever you think you're hiding is a place a child will definitely stumble into at some point.

4. The potential of becoming a registered sex offender

Of course, if you do get caught, you're screwed, and not in a good way...

A towel is not a bed. It just...isn't. It's not even a couch or a solid table. Towels get messed up when you move on them, even a little bit. Have you ever tried to lay still on a towel while sunbathing? If you have, you'll know that, inevitably, within minutes, the towel is twisted around and covered in sand. I don't know why it happens, but such is the nature of towels. There are other sex things that don't gel well with the beach too, like condoms. Can you imagine what it feels like to try and roll on a condom with a few specks of sand in it? I don't even have a penis and I'm cringing.

6. Not being able to get totally naked

You probably don't want to get totally naked when you're doing it in public (although, I guess at least your bottoms are going to have to be slipped down) because you want to be able to dress quickly for a sudden getaway. Having to be so guarded and careful and cover up and keep so many nudie rules in mind can kill the spontaneous vibe of sex on the beach.

7. Getting your bits burnt

I don't know about you, but when I'm at the beach, I'm not lathering up my nipples, bum and vagina with sunscreen. I consider the places covered by my swimwear to be generally safe from sun damage. But when you start getting frisky on the beach, these places become exposed (even if you're not getting totally naked; I mean, things slip out and logistics pretty much dictate your ass will be at least a little bit out), and being that this skin is extra sensitive, and that you probably didn't cream it up (WITH SUNSCREEN, YOU PERV), it's at risk of being burned.

The bugs they have on the beach are a special kind of bug. They all sting the shit out of you. They're not just bugs that impotently crawl around just being generally gross — they're actually going to HURT YOU. Sand flies, sea fleas, bull ants: the beach landscape is filled with the kinds of insects that will leave you with welts and rashes if they get involved in your business. No, thank you.