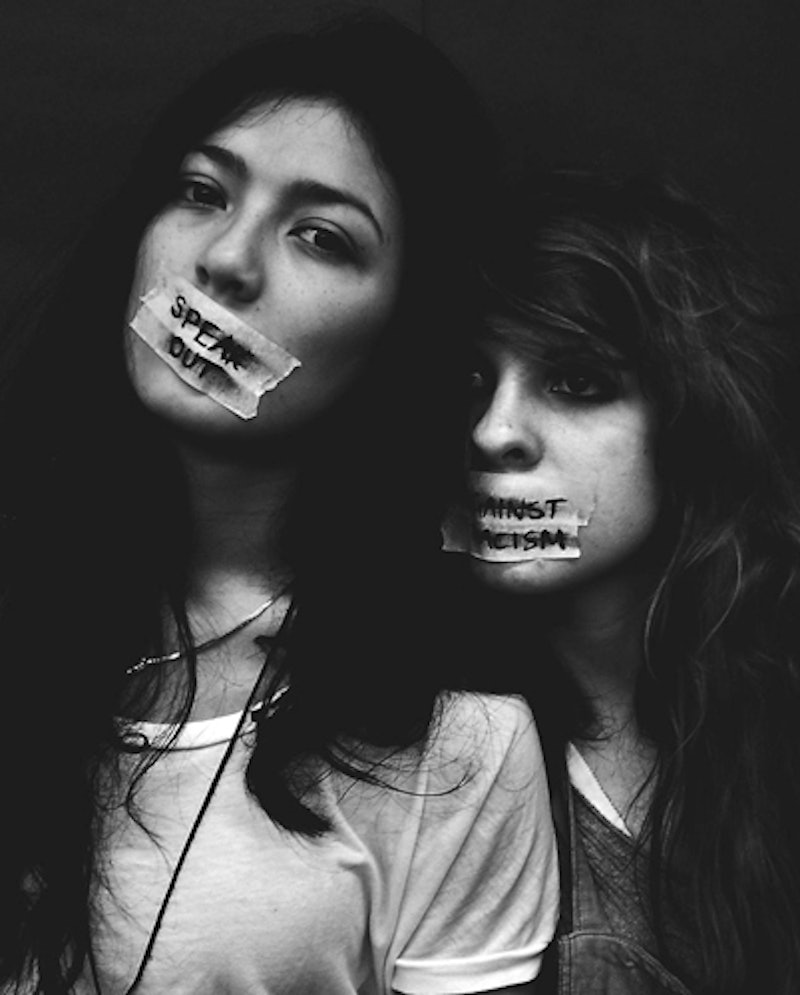 Have you ever heard a figure of speech and stopped wonder where it originated? I bet you weren't thinking that a prase like "long time no see" had a racist past — but this is just one of the six phrases you didn't know were racist that Franchesca Ramsey of MTV's Decoded breaks down in the latest installment of the web series. Each of the phrases explored are things that we still often say today — but we don't always know the history behind them, and it turns out that they all have racist undertones. It's an important reminder that subtle racism can sneak its way into our everyday lives without us even realizing it, and much of it goes back to with the language we unthinkingly use.

What's the big deal with these phrases? They're not just words; language is powerful, whether you like it or not. "Language not only develops in conjunction with a society's historical, economic and political evolution; it also reflects that society's attitudes and thinking. Language not only expresses ideas and concepts but actually shades thought," Robert B. Moore writes in Race, Class, and Gender: An Integrated Study. How we speak and what we choose to say speaks not only to us as individuals, but also to the broader cultural landscape in which we live.

You can scroll down to watch the full video, but in the meantime, let's start with three of the phrases from it. Do you use these ones regularly? If so, you might want to start eliminating them from your vocabulary.

As Ramsey puts it, the peanut gallery refers to some kind of unwanted disturbance; it's often used to reference people engaging in behavior that's considered to be rude. So where does this phrase originate? In the 1920s, the peanut gallery actually referred to the back section of theaters, which were the only places that people of color were allowed to sit during the Jim Crow era. The reason the word "peanut" is used has to do with George Washington Carver: He's sometimes called "The Peanut Man" because of his ideas around doing crop rotation using peanuts. Although this may seem like a nice tribute, back in the day, scientists who were anything other than white weren't viewed favorably; the phrase was meant to poke fun at the idea of people of color engaging in intellectualism. Peanuts were are still a frequently eaten snack in theaters, which also informed the reference.

We often say, "Long time, no see!" when we run into someone we haven't seen for a long time and want to express to them that we're happy to catch up with them. Unfortunately, though, "long time, no see," is part of what's called Pidgen English. Pidgen languages are simplified versions of languages that make communication easier, especially if you're new to speaking a language. A shortened version of something like, "I haven't seen you in a long time," the phrase "long time, no see" was actually historically used to mock indigenous peoples' patterns of speech.

You've probably said "G*pped" more than a few times and seen t-shirts at Urban Outfitters that have the word "G*psy" used as a seemingly glamorous term for someone who travels in high-style. You're probably wondering why I'm censoring these terms, but it turns out that they're actually racial slurs. Yep, for real.

Let's break it down a little to understand it better: G*pped means to "cheat or take advantage of someone" in today's time, but was originally a racial slur used in against Romani, a nomadic Eastern European group originally from India. They've been labeled as being deceitful throughout history, and this stereotype has often been used to justify discrimination and prejudice against them. G*psy, on the other hand, came about when the Romani emigrated to Europe and they were mistake for being Egyptians — thus the name.

And this isn't just a word you encounter in books; as Ramsey points out, "the consequences of the g-word are still felt today." Romani still face real discrimination, so it's not a word to be taken lightly. We should be trying to dismantle prejudices, not further them — so let's take this word out of rotation.

To see the racist histories behind three more phrases, watch the full video below.