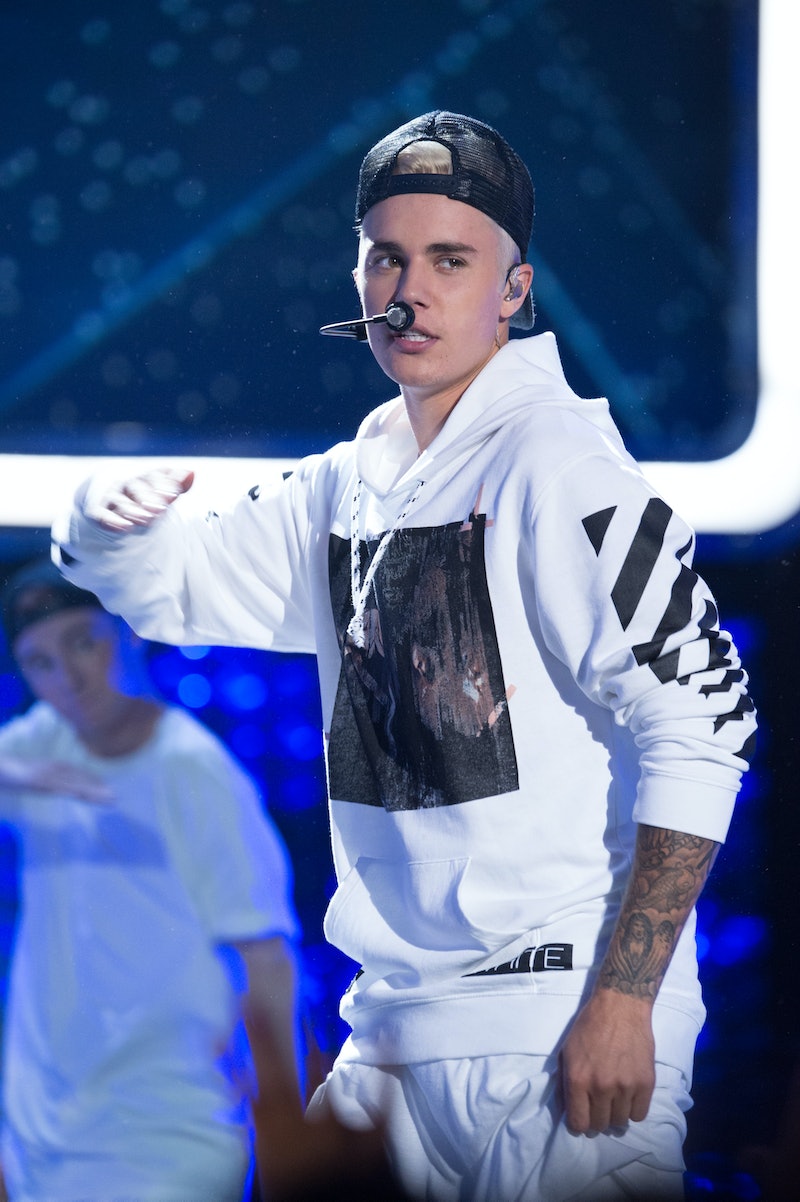 Though the internet erupted with paparazzi shots of a naked, swimming Justin Bieber all over everyone's timelines on Wednesday — along with the oft repeated, lame "What Do You Peen?" joke on Twitter — the singer has yet to comment on the complete and total invasion of his privacy, seemingly ignoring the situation on social media and instead re-posting facts about his career success. And while Bieber has yet to make a statement about the nude photos, he did favorite one tweet that pretty much sums up his reaction to the gross situation.

Chrissy Teigen tweeted some serious truth bombs about Bieber's invasion of privacy on Wednesday night, creating a call-to-action to focus on the seedy paparazzo who shot the nude photos of Bieber instead of on the absurd notion that the singer may have done something "wrong." Though she never mentioned the "What Do You Mean" singer by name, it became all too relevant that she was talking about his situation once Bieber favorited the tweet on Thursday, Oct. 8.

It hearkens back to a lot of the "well, don't take naked photos" chatter that happened when a 4chan leak doled out nude photos of Jennifer Lawrence and other top female celebs last year. What Teigen had to say was some total real talk.

And judging by the gleeful reactions — so strikingly different from the horrified outcry after Kate Middleton sued a magazine for publishing her topless photos and Jennifer Lawrence's naked pics were hacked and leaked onto the Internet — it seems that so many people out there need a serious lesson in what it means to invade someone's privacy. And yes, even if that person is Justin Bieber.

Maybe it's because it's Bieber — a lightning rod for this kind of hate merely based on the fact that he's ~acted out~ in the past and has shared several nude-from-behind photos of himself on social media — but how on earth does that somehow make it OK for a random stranger with a camera to sell shockingly invasive, full-frontal nude photos — and for an outlet (in this case, the New York Daily News ) to publish them?

I understand the fangirl curiosity and the "OMG, Bieber's packin'" reactions — but things would be entirely different if the kid shared these photos and posted them himself. It's an disgustingly gross invasion of privacy when you are privately vacationing and taking a (skinny) dip and some ~photographer~ comes along, works that overly long telephoto lens, snaps a few shots and makes his entire salary for a year. And then suddenly you're exposed for the entire world to see, download, print, and comment on. It's just like that dream of showing up to school naked — only, for a celebrity like Bieber, it's reality. And it is NOT OK.