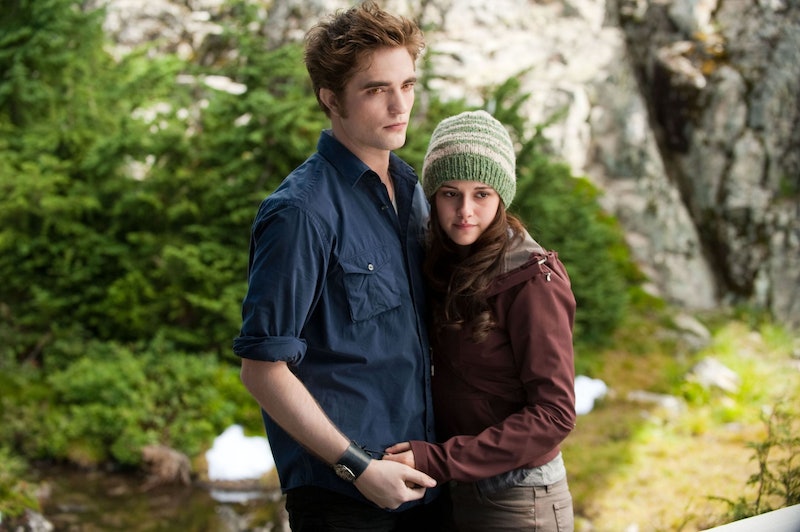 Twilight fans were abuzz on Tuesday. Not only were they excited for their beloved series' 10th birthday, but also for Life and Death: a gender-swapped Twilight revision bundled with the original novel in an oversized anniversary edition. If you haven't heard about it, you might be living under a rock... or you're at least not on Twitter.

The rewrite hype spread to all social media corners, and reactions have been fairly evenly mixed. Some Twihards were excited for any new material they could get their hands on, while others criticized Meyer for the inherent lack of originality in sparsely rewriting an existing novel. Still others were disappointed that another year had passed without a Twilight retelling from Edward's point of view. Debates raged over whether or not Life and Death is a work of fanfiction, and over how much of an improvement — if any — it was on the original novel's gendered stereotypes.

In Life and Death, Bella becomes high school student Beau, and Edward is transformed into female vampire Edythe. Werewolf Jacob is now werewolf Julie. Except for Bella/Beau's father, every character gets gender-swapped in Meyer's "reimagining."

If you haven't checked out the gender-swapped Twilight yet, here are the seven things you need to know.

Preemptively addressing the inevitable criticisms that she search-and-replaced the original novel for big bucks, Meyer said, "I want to say this is not a real book, and I am totally aware of this."

2. It's Not Midnight Sun

Back in 2008, excerpts from Midnight Sun — a rewrite of the original Twilight from Edward's perspective — surfaced online, causing Meyer to abandon the project. Twihards held out hope for Midnight Sun to make a triumphant return on the series' 10th anniversary, but Life and Death isn't the book they were waiting for.

3. The Gender Swap Grew Out Of Fans' Criticisms...

At book signings, according to Meyer, readers would often criticize Bella as being just another "damsel in distress," but the author had a different take: "[S]he's actually just a human in a world full of superheroes. Can you lift a car over your head?"

With Life and Death, Meyer intended to show that the results of a vampire-human romance would be the same no matter which partner was immortal. But, as The Guardian points out, "The idea of a moody teenage boy going gooey over a centuries-old, mysterious, super-strong woman who can fly feels revolutionary. Add in ... pages of moping about whether or not this powerful older woman actually likes him, and a pack of lady werewolves, and this is sounding like the book I’ve been waiting to read all my life."

5. Kristen Stewart Kind Of Predicted Life and Death, Way Back In 2012

The actress echoed Meyer's sentiments regarding Bella's damsel-in-distress status in a promotional interview for Breaking Dawn Part 2. Stewart asserted that a male Bella would be seen as "courageous" by audiences, then — somewhat paradoxically — claimed "they’d have stopped after the first movie" if it weren't for Meyer's female lead.

Life and Death isn't Twilight with the names and pronouns swapped, but it's pretty close. When asked about the differences between the two novels, Meyer said personality changes set the gender-swapped version apart as it unfolds, but admitted that "it really is the same story."

7. ...But There Are Some Things Meyer Says She Can't Do

"I literally can't do Breaking Dawn," Meyer said, claiming that "Renesmee can't exist" because neither vampire Edythe nor male human Beau can get pregnant. But I'm going to stop her right there. As the Guardian noted, Life and Death may very well be Twilight fanfiction, given that genre's longstanding tradition of gender-swapping. You know what else has a longstanding tradition in fic-writing? MPREG. Your move, Steph.