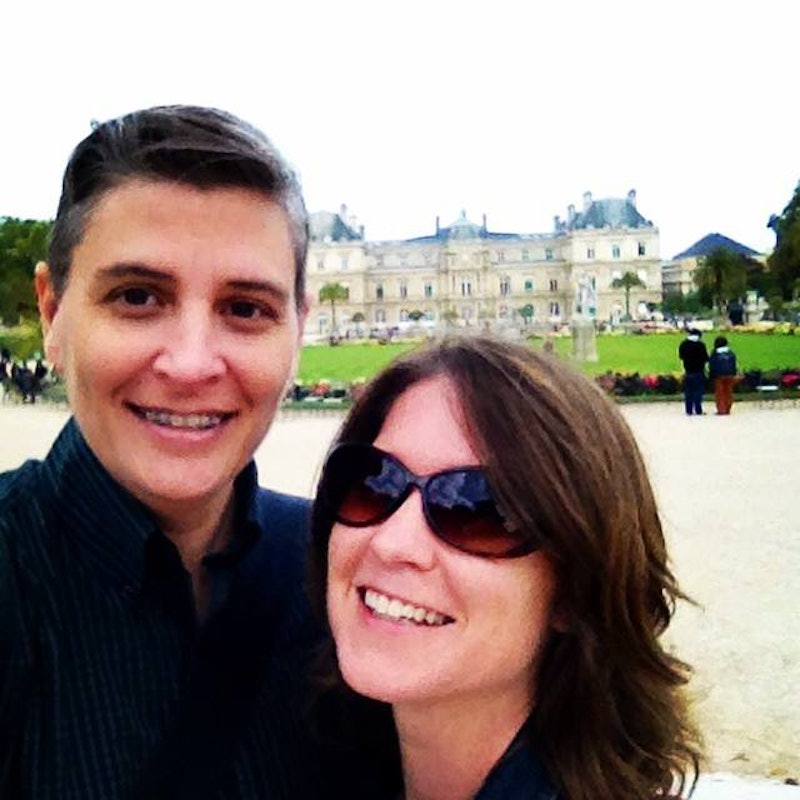 When Simon first seriously considered transitioning (before he’d even chosen the name Simon), I was petrified that his transition would mark the beginning of the slow unraveling of our marriage. I couldn’t envision what our lives would look like if he made the leap to transition; as a lesbian, the thought of being married to a man unnerved me in every way. From my point of view, we were about to go over a cliff with absolutely no safeguards in place.

In an effort to control a situation that was careening wildly off the course I’d charted for my life, I put stipulations on Simon’s transition at the beginning: it was okay to choose a male name and use male pronouns, but talk of testosterone freaked me out. Trying to control Simon’s transition was like trying to hold my ground in shifting sand. Once he got a taste of what life could be like if he got to live authentically, he was so exuberant that I couldn’t do it. I couldn’t kill a part of his soul just to hang on to our relationship. So I let him be him, in the ways that he needed to be, and I simply rode the current. It was the only way to see where we’d land.

Instead of causing us to crash and burn, Simon’s transition breathed new life into our relationship — a relationship that we’d been struggling mightily to keep afloat, although neither of us realized it at the time. The way that this reinvigorated our relationship might make Simon and I an anomaly. In some relationships, a partner’s coming out as transgender feels like a betrayal. And for some, the transitioning process does mark the dissolution of their marriage. I understand that perspective. I certainly felt unmoored when I realized that the woman I married was, in fact, a man. But, for us, Simon’s transition brought us back into the light. We are learning, every day, to love each other more completely. We are discovering what real partnership looks like.

When I first met Simon (when we were both lesbians), we had this intense spark of connection. We lived and breathed each other. It was exhilarating and all-consuming, the way new love can be. Then, after the first year, something changed. For Simon, that kind of vulnerability couldn’t last. He was spending tremendous amounts of psychic energy walling off an entire part of himself, the part that was male. That disconnect within himself meant he couldn’t connect to me either, not on an intimate level—physically or emotionally.

We navigated the next 11 years of our relationship by developing a deep friendship. We loved and cared for each other; we supported each other through infertility, through recovery from alcoholism, through life — as friends. Occasionally, there would be a momentary spark of passion, a time where we’d connect on that intensely intimate level again. And then, just as quickly, it was gone. Pre-transition, Simon simply couldn’t exist in an intimate space. I, on the other hand, longed for intimacy. By the time we began the discussion regarding transition, I was already considering leaving. I just couldn’t spend the rest of my life in a platonic relationship. Simon’s simple and clear declaration about the impact his transition would have on us convinced me to try: “I will finally be able to be the person you’ve always deserved.”

Simon’s transition has resembled waking up, bit by bit. Within a week of his decision to transition, he began to look at me like I was new to him. After years of walking around feeling invisible, being seen moved me to tears. Several times. I felt wanted, desired. He held my hand. He stood close to me. He acted not like he loved me but like he was in love with me. And I just couldn’t get enough. The reconnection was electric and consuming. It was beginning again, with someone I already loved.

Even though there’s a lot of sunshine and rainbows going on over here, I still have very real feelings about having survived in a relationship devoid of intimacy for so long. I am pissed. And resentful. But at the same time, I understand now why he couldn’t let me in. How could he connect to me in any genuine way when he couldn’t be real with himself? Now, I find myself living with a 41 year old trans guy who is on testosterone, which is… different. Let’s just say that his sex drive outmatches mine for the first time ever. There is a fine line between honoring his needs and being true to my own needs, which is a possibility for the first time in years. So we navigate this as best we can: openly, honestly and with a lot of freedom to make mistakes.

Simon’s transition has also changed the way we communicate. From the beginning (and I mean the very beginning here), we built our relationship on open communication. We talked about everything. And we used to understand each other implicitly. And then: testosterone. It could be argued that two months on testosterone is not long enough to change the way that Simon communicates. It could also be argued that hormones have nothing to do with communication—that communication is learned. I hear that. But it seems an odd coincidence that, in the past two months, Simon and I clash far more frequently than we used to. And the clashes are almost always based on a misunderstanding of tone, word choice or facial expression. Sometimes we don’t get each other at all. But when we sit down and move past the minutia and into what really matters, we have brilliantly open, honest conversations. There’s a level of truth and vulnerability that simply wasn’t possible before. I’ve exchanged harmony in communication styles for a laid-bare exchange of personal truths. This feels like a victory—albeit a victory fraught with intermittent sighs and eye-rolling.

A full transition takes years; we’ve really only begun the process. But we are far enough in that our relationship has seen some major changes. I fought hard against testosterone, because I was afraid it would change Simon into someone I didn’t recognize. I feared he’d be angry and impatient. I thought the physical changes would kill my desire for him. It’s a good thing I don’t call all the shots in life, because sometimes I am dead wrong. Simon’s transition—which includes testosterone—has resurrected our relationship. I am so grateful to experience this love, to watch him become who he was meant to be.