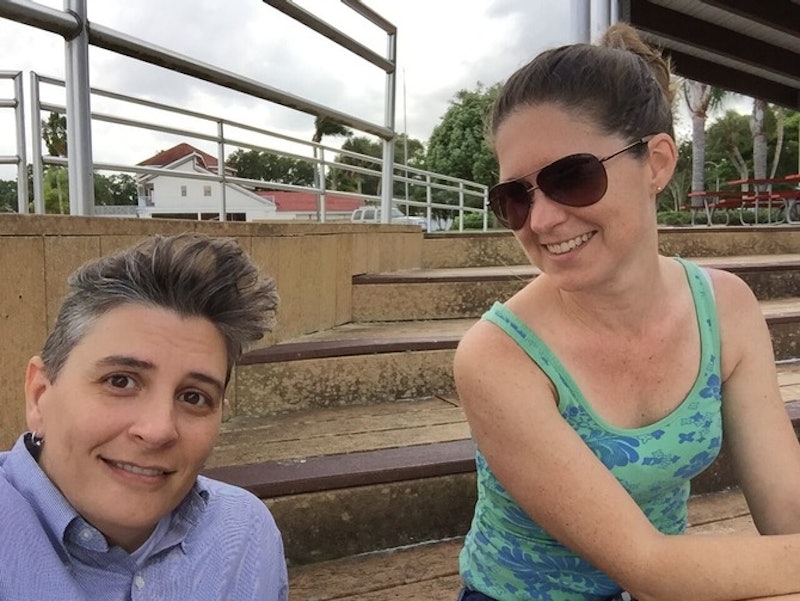 I once walked into the bathroom to find my two-year-old daughter standing, facing the toilet, pinching her vagina in an effort to pee standing up. She felt absolutely entitled to be able to pee the way the boys at preschool did. I asked if she knew why boys could pee standing up. With a great deal of earnestness, she proclaimed, “They have penises!” I affirmed her observation and let her in on the sad fact that a penis is a necessary piece of equipment in the standing-to-pee game.

“Do all boys have penises?” she asked me. Yes.

“Girls don’t have penises?” No.

As I’d discover a few years later, my answer to her inquiry was way oversimplified.

This summer, my partner of 12 years came out as transgender. While the decision to transition wasn’t a complete shock to me, I’d hoped the the person who had been my lesbian partner could find a way to, well, stay a lesbian. But by the time that Simon made the decision to go forward with a transition, I’d made my peace with it, mostly.

Since Simon came out as trans, I’ve fielded lots of questions from family, friends, and acquaintances. Our public declaration of his transition immediately gave us a celebrity of sorts. Simon is the only transgender person that most of the people who run in our circle know. I love that people have questions, because it means they are thinking about trans people and trans issues. Simon and I chose to be out about his transition, because greater visibility leads to greater acceptance and inclusion.

Think of this list of our most commonly asked questions as a public service, in case you aren’t fortunate enough to have (or to know that you have) a trans person in your life. Of course, the answers to these questions come from our own personal experiences; we definitely do not purport to be the authority on all things trans or the voice of all trans people.

Although most people ask this question with good intentions and from a place of curiosity, it really isn’t an appropriate question. Here's why.

Problem 1: There isn’t one magic surgery that magically “changes” Simon into “a man.”

Problem 2: Asking about surgery distills gender down to just anatomy. So much more goes into creating someone’s gender identity. (See the problem with my reducing the category “boy” down to “someone with a penis” during the ill-fated standing-to-pee incident?)

Problem 3: The question treats him like a curiosity instead of a person. I would never walk up to a friend and ask about the state of their genitalia. I’d love it if people would extend Simon the same courtesy.

2. "Which restroom does Simon use?"

Simon uses the men’s room. Because he is male.

Pre-transition, my partner was never able to use the women’s room in peace, because someone always thought she was a man going into the women’s room. So, Simon was pretty grateful to transition into using the men’s room.

Our daughter Jane started out her life calling Simon “Baba.” It is a name that Simon chose for himself before Jane’s birth. In some cultures, “Baba” translates to Dad or Daddy, a solid choice for Simon, who, even pre-transition, was skittish about the idea of being identified as a mother. I didn’t get it then. I get it now.

Selfishly, I hope Jane will stick with Bobby because it’s awesome, unique, and adorably quirky. But if she wants to call Simon “Daddy,” that’s OK, too. She can choose.

Recently, the doctor at a walk-in clinic referred to Simon as Jane’s daddy. Jane shot Simon a conspiratorial look. When the doctor left, they had a good laugh at the inside joke they shared. Because obviously Simon is her Bobby. Duh.

4. "What does your daughter think about Simon’s transition?"

I don’t believe she thinks about it at all. The only snag we hit was when I preemptively told her that I’d be switching from calling my partner by his birth name to calling him Simon. I anticipated zero response from her or perhaps a totally unrelated discussion of the latest trials and travails on My Little Pony. Instead, I got body-shaking sobs. It took a while just to calm her back down. She seemed to think I was telling her that her Bobby was leaving and someone else would be coming in his place. Someone new. Someone named “Simon.” When she finally understood that Bobby would still be Bobby, all was right with the world again.

Jane picked up quickly on the shift from female to male pronouns, and she is apt to correct folks who use the wrong pronoun. Pronouns aside, Jane benefits from all the positive changes that Simon’s transition has brought about. Her Bobby is more emotionally available, more ready to play, and more comfortable around Jane's friends and at her preschool.

5. "If Simon is male, does that mean that you're straight now?"

Here’s another instance where oversimplification just won’t cut it. I am attracted to women. However, I am in love with Simon. We’ve been together for almost 12 years. We’ve navigated getting sober, two years of infertility, and raising a child together. I fell in love with the essence of who Simon is. I didn’t know when I fell in love with him that he was male (to be fair, he couldn’t really articulate it that clearly then, either). If he had transitioned before we met, we would not be together.

But I’ve reached point where I am able to accept — and celebrate —Simon’s gender identity. He is so much more himself as he continues to transition, and I am watching all the things I always believed him to be come to life. That is attractive. So is my deep connection to him — a connection we’ve shared since we met.

So, no, I am not straight. I am really digging the “queer” label, though. We’ll go with that for now.

6. "How do you feel about Simon choosing to become a man? "

Simon didn’t "choose" to be transgender any more than I chose to be gay. He has been a boy, always. His gender identity has always been that of a boy, always. Leafing through a few childhood pictures will really drive home that point. In hindsight, it seems a bit comical that everyone didn’t know he was transgender from the very beginning. When Simon was attempting to live as a girl, he was depressed. He constantly felt alienated around both men and women, since he felt he really didn’t fit with either gender. He simply couldn’t ever be at ease in his own body when he presented as female.

So, I think Simon transitioning to male isn’t a choice; it is a necessity.